Peter J. Schulz, who has a PhD in philosophy from Catholic University of Eichstätt-Ingolstadt (Germany) and is currently employed as Professor of Communication in the Faculty of Communication Sciences at the University of Lugano, and who already had four plagiarism-related retractions (and three citation-related errata) to his name, was again found to have plagiarized—this time by a class of undergraduate students.The recent accusation and the resultant retraction of Schulz’s “Subjectivity from a Semiotic Point of View” (from a 2001 volume from the Nordic-Baltic Summer Institute for Semiotic and Structural Studies), is discussed in a post at Retraction Watch. Schulz was found to have plagiarized from philosopher Sir Anthony Kenny and Pope John Paul II.

I corresponded about the case with Michael V. Dougherty, Professor and Sr. Ruth Caspar Chair in Philosophy at Ohio Dominican University. He informed me that the retraction was requested by him and his undergraduate students in his “Critical Research and Writing” honors course.

“As a class, we tracked down the sources together and sent the retraction request to the publisher,” he says.

Here’s the letter they sent, along with an annotated version of Schulz’s piece.

And here’s a sample of the plagiarism: 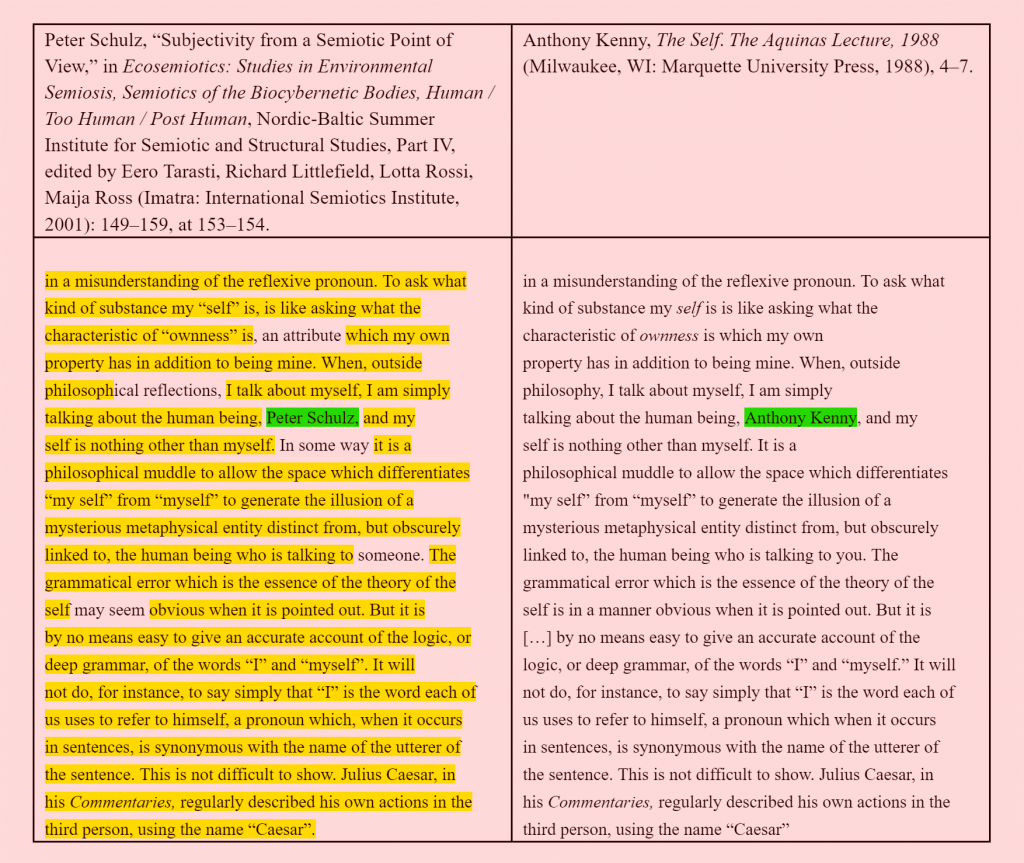 UPDATE (1/22/2018): Schulz’s employer, the University of Lugano (also known as Università della Svizzera Italiana or USI) says there will be no new investigation of Schulz’s academic misbehavior. “The case in question—reads a note—falls within the period and in the methods already taken into consideration in the context of the investigation that the USI conducted, concluded and made public in August 2016,” reports Tio.

The University also appears to cast aspersions on Michael Dougherty, who brought the plagiarism to light and who regularly investigates and studies plagiarism in philosophy (I say “appears to” as I am not sure of the quality of the translation I’m reading): “the source of these reports is always the same: the fury with which this person proceeds requires a certain caution in acting and an accurate assessment of the good foundation of the continuous ‘complaints.'” I’m familiar with several of Dougherty’s interventions into academic integrity and I’d say his thorough and measured approach suggests not “fury” but diligence. If this report about the university’s comments about Dougherty is correct, it is very disappointing.

Honest question: how does this guy still have a job?Report

Curious, that. When he refers to “I” and “myself” in the paper, is he in point of fact referring to Anthony Kenny? Some crazy people think they’re Elvis, others think that their indexicals index to Sir Anthony?Report

There’s nothing even remotely subtle about these instances of plagiarism. I know some journals run their submissions through a “turnitin”-like service to check for this kind of stuff but, maybe the solution should just be to have this become standard practice? Would that be too large of a cost burden on already strapped-for-resources journals?Report

I guess if you’re going to plagiarise so outrageously you might as well do it from the Pope!!

As for adopting some sort of ‘Turnitin’ service, I’d like to see some evidence that this is really a widespread problem before adding to the workload of editorial managers – do we have any Schulz-like examples from ‘leading’ philosophy journals for instance?Report

“do we have any Schulz-like examples from ‘leading’ philosophy journals for instance?”
Arguably, yes:
http://www.nnrh.dk/NNRH-hp/40.Cases.of.Plagiarism.pdfReport

Hmmm…. Arguably?! I don’t see many ‘leading philosophy journals’ here! What we have is a bunch of cases of one guy writing articles for collections and encyclopaedias that are plagiarised from articles in (mostly) other collections and encyclopaedias. Heinous yes but not quite what I was looking for. One difference between such cases and those (any?) involving journals might be the quality of refereeing and general scrutiny involved. Anyway, I wouldn’t take this example as sufficient to cause me to suggest we introduce some sort of Turnitin buffer into the submission process …!Report

Color me skeptical that there is widespread plagiarism in leading philosophy journals. You’d have to be plagiarizing work that is (a) good enough to pass peer-review, but (b) obscure enough that no-one is ever going to notice. So plagiarizing any living person is unlikely to work, for instance: if their writing on Y is publishable in the Journal of X, they probably read the articles on Y in the Journal of X too, and even if they don’t, lots of other Y scholars do. Even if you get lucky and the journal referees miss it, you’re very unlikely not to get caught a few months or years later. And being caught probably means the end of your career. So I agree with Steven: let’s hold off adding another administrative layer to the journal process.Report

Weird… If you’re going to literally contol-c / control-v I’d have thought you’d pick some obscure victim to plagiarize. But Kenny is pretty eminent and JP2 was, er, the pope. This is bizarrely brazen.

Do people get away with this sometimes I wonder?Report