How do publishers respond to cases of plagiarism in philosophy? Michael V. Dougherty, professor and Sr. Ruth Caspar Chair in Philosophy at Ohio Dominican University, looks into the matter in a new article in Metaphilosophy, “Correcting the Scholarly Record in the Aftermath of Plagiarism: A Snapshot of Current-Day Publishing Practices in Philosophy.”

He does so by looking at a case of serial plagiarism: that of Martin W.F. Stone, a former professor of philosophy at Catholic University of Leuven, who, according to Dougherty, has at least 43 counts of plagiarism to his name. Dougherty classifies various actions publishers have taken in response to learning of Stone’s plagiarism, assessing their strengths and weaknesses. Here is a table charting how publishers announced the findings of plagiarism to their readers, in regard to four different qualities: 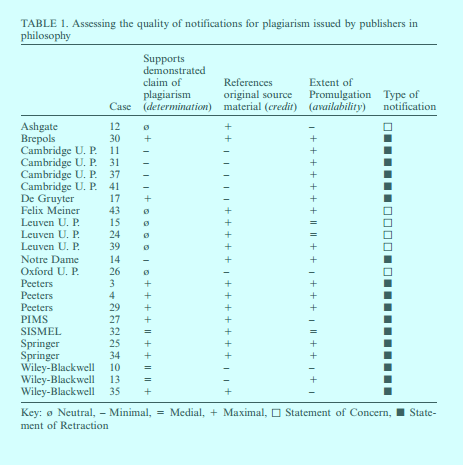 Table 1, “Correcting the Scholarly Record in the Aftermath of Plagiarism,” by Michael Dougherty

And here is a table showing what kinds of actions publishers took in response to the plagiarism:

Table 3, “Correcting the Scholarly Record in the Aftermath of Plagiarism,” by Michael Dougherty

First, there is relatively little uniformity among publishers in philosophy in responding to the publication of plagiarized articles and book chapters. Second (and more significant), in comparison with the natural sciences the discipline of philosophy often falls short of the standard practices for correcting the scholarly record.

Plagiarism should not be ignored, he says, for various reasons:

The deleterious effects of unretracted plagiarized works are numerous. When genuine authors have their works misappropriated in acts of published plagiarism, the absence of a correction deprives them of the credit they are due for the discoveries they have made. The history of discovery and the genealogy of ideas are distorted. Furthermore, the presence of unretracted plagiarized works within the repository of the published record wreaks havoc upon the professional development of students as well as the ongoing work of scholars who unknowingly use plagiarized books and articles in their research.

Publishers that offer SRs [statements of retraction] that are maximal in determination, credit, and availability mitigate the injurious effects of plagiarism and restore the trust that is essential to the scholarly enterprise. Fully maximal SRs can be viewed as valuable instances of postpublication peer review that strengthen a publishers relationship to the body of published research.

The full text of Dougherty’s article is available here.