Over the past several days academics on social media have been discussing in increasingly agitated language the publication of “The Case for Colonialism,” by Portland State University associate professor of political science Bruce Gilley, in the academic journal, Third World Quarterly.

There is now a petition with over 6,000 supporters (as of the time of writing this post) calling for the editorial team to retract the article, for the editors who approved it to apologize for “further brutalizing those who have suffered under colonialism,” and for the editors to be replaced. 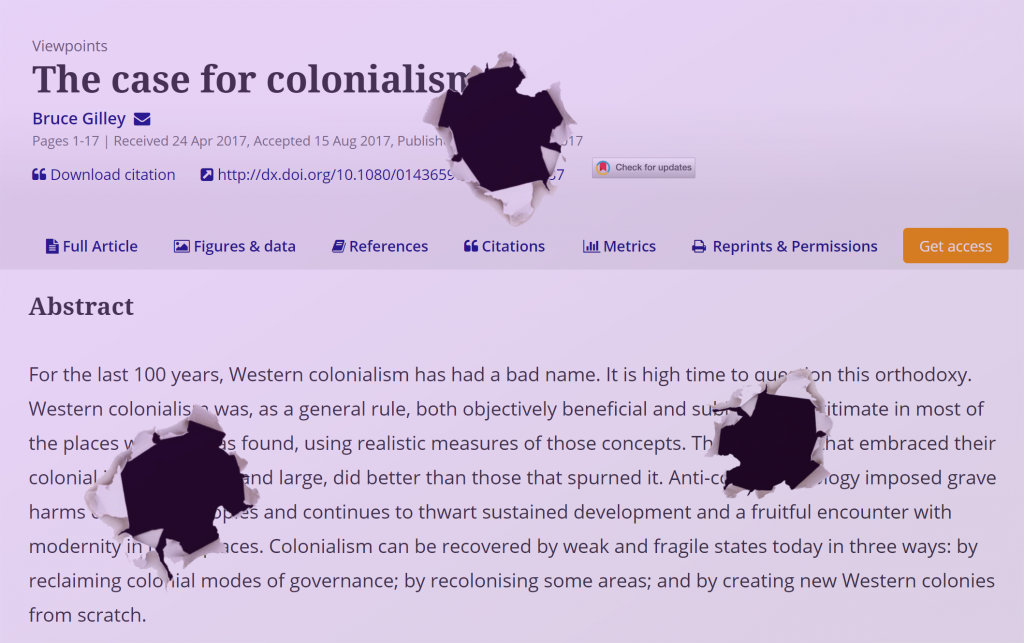 Ignoring McNulty’s wisdom—this particular dispute belongs to political science, not philosophy—I’d like to share some thoughts on this. After all, what is going on now isn’t all that different from a recent episode in our discipline, and it provides an opportunity to put some thoughts out there should we face such a situation again.

Here are the introductory paragraphs of Gilley’s article, which I post to give you a sense of what it’s about (there is an ungated version of the piece here):

For the last 100 years, Western colonialism has had a bad name. Colonialism has virtually disappeared from international affairs, and there is no easier way to discredit a political idea or opponent than to raise the cry of ‘colonialism’. When South African opposition politician Helen Zille tweeted in 2017 that Singapore’s success was in part attributable to its ability to ‘build on valuable aspects of colonial heritage’, she was vilified by the press, disciplined by her party, and put under investigation by the country’s human rights commission.

It is high time to reevaluate this pejorative meaning. The notion that colonialism is always and everywhere a bad thing needs to be rethought in light of the grave human toll of a century of anti-colonial regimes and policies. The case for Western colonialism is about rethinking the past as well as improving the future. It involves reaffirming the primacy of human lives, universal values, and shared responsibilities—the civilising mission without scare quotes—that led to improvements in living conditions for most Third World peoples during most episodes of Western colonialism. It also involves learning how to unlock those benefits again. Western and non-Western countries should reclaim the colonial toolkit and language as part of their commitment to effective governance and international order.

There are three ways to reclaim colonialism. One is for governments and peoples in developing countries to replicate as far as possible the colonial governance of their pasts—as successful countries like Singapore, Belize and Botswana did. The ‘good governance’ agenda, which contains too many assumptions about the self-governing capacity of poor countries, should be replaced with the ‘colonial governance’ agenda. A second way is to recolonise some areas. Western countries should be encouraged to hold power in specific governance areas (public finances, say, or criminal justice) in order to jump-start enduring reforms in weak states. Rather than speak in euphemisms about ‘shared sovereignty’ or ‘neo-trusteeship’, such actions should be called ‘colonialism’ because it would embrace rather than evade the historical record. Thirdly, in some instances it may be possible to build new Western colonies from scratch.

Colonialism can return (either as a governance style or as an extension of Western authority) only with the consent of the colonised. Yet now that the nationalist generation that forced sudden decolonisation on hapless populations has passed away, the time may be ripe. Sèbe has documented how the founding figures of Western colonialism in Africa (such as Livingstone in Zambia, Lugard in Nigeria and de Brazza in Congo) are enjoying a resurgence of official and social respect in those countries now that romanticised pre-colonial and disappointing postcolonial approaches to governance have lost their sheen. As one young man on the streets of Kinshasa asked Van Reybrouck (as described in his seminal 2010 book on the Congo): ‘How long is this independence of ours going to last anyway? When are the Belgians coming back?’

The petition says, among other things:

The article lacks empirical evidence, contains historical inaccuracies, and includes spiteful fallacies. There is also an utter lack of rigor or engaging with existing scholarship on the issue.

Some of my thoughts on this matter (none of which are about, or constitute a defense of, Gilley’s thesis):

None of this is to say that calls for retractions are never in order. They certainly are in some cases of academic and editorial misconduct. Whether the publication of Gilley’s article involves such misconduct I do not know*: I haven’t read it, I’m not an expert in the field, and I haven’t heard back yet from the editors.

But it is to say that our default reaction to cases like this should not be “retract!” but rather, “rebut!”

UPDATE 1 (9/14/17): Farhana Sultana, associate professor of geography at Syracuse, includes information about the editorial review process the paper underwent in a public Facebook post calling for the paper’s retraction:

I have been recently informed it did actually undergo the standard peer review process common in academic journals and was rejected, but was then published as-is as a Viewpoint by the journal; however, such items are still meant to be read and approved by members of the journal’s Board, which consists of several illustrious scholars in this particular journal; I understand that board members were not aware of the piece until its publication.

UPDATE 2 (9/14/17): This essay, “A Quick Reminder of Why Colonialism Is Bad,” by Nathan J. Robinson (Harvard) at Current Affairs, is worth reading. Robinson lays out some of the problems with Gilley’s article. For example:

In his presentation of colonialism’s record, Gilley has deliberately excluded mention of every single atrocity committed by a colonial power. Instead of evaluating the colonial record empirically, he has distorted that record, concealing evidence of gross crimes against humanity. The result is not only unscholarly, but is morally tantamount to Holocaust denial.

Robinson also suggests that Gilley’s article is a trap:

This article does not read as if it is attempting to be taken seriously. Its tone toward critics of colonialism is polemical and mocking… Gilley must intend to provoke people to rage… I expect Gilley wants the following to happen: people will be outraged. They will call for the article to be retracted. Then, Gilley will complain of censorship, and argue that lefties don’t care about the facts, and that his points has been proved by the fact that they’d rather try to have his article purged than have to refute its claims. This is a dynamic that has occurred many, many times.

(added 9/15/17): I should have also included this excerpt from Robinson’s article:

I am not signing the petition to have it retracted, because I believe that the journal shouldn’t retract it simply because there was public pressure. I am also very concerned that this could be a PR coup for the right, as so many of these things are. It’s tough, of course, because for the reasons I’ve outlined above, the article shouldn’t have been published. Gilley did not meet the standards that should be expected of an academic. He falsified history. When evaluated by a fair standard, he has not upheld the honesty and rigor that should be expected of someone in his position, and the article is a factual disgrace as well as a moral one. But it would be very easy to fall into a certain predictable trap, where the left calls Bruce Gilley a racist, and Gilley declares that they simply can’t handle the truth. And while I’m sympathetic to the argument that we should avoid that by Not Even Addressing Such Rubbish, bad arguments fester when they go unaddressed.

So we have an appraisal of historical events that gets basic parts of the history wrong, ignores or passes over key events, purports to be a cost-benefit analysis while not actually factoring in costs, is  naively credulous as to tyrant’s self-affirmation, and advocates a mode of counter-facutal reasoning that is both underspecified and from what can be discerned amounts to a non-sequitur. This is not good scholarship. I’ll end here. This is more effort into this than I really intended, but I have now seen so many people saying that the arguments of the piece aren’t being given consideration but people are rushing to condemn that I thought this worth setting out. I take this aspect of philosophy seriously, and think that a significant public role we should play is holding people to argumentative standards. For whatever that is worth, The Case For Colonialism does not meet those standards.

UPDATE 4 (9/19/17): Shahid Qadir, editor-in-chief of Third World Quarterly, has issued a statement on the article. It is noticeable vague on the crucial details. For example:

As a peer reviewed, scholarly journal, our Aims and Scope sets out that TWQ “…examines all the issues that affect the many Third Worlds and is not averse to publishing provocative and exploratory articles”. Throughout its 40 year history, TWQ has been at the forefront of shaping development discourse, with Viewpoint essays enabling challenging opinions to be tested though rigorous double-blind peer review and then debated upon publication by fellow researchers. As with all articles in the journal, this Viewpoint did undergo double-blind peer review and was subsequently published.

UPDATE 5 (9/19/17): 15 members of the editorial board of Third World Quarterly have resigned. Their resignation letter does not paint a pretty picture of how this article’s publication came about:

As International Editorial Board Members, we were told in an email on 15 September from Shahid Qadir that this piece was put through the required double-blind peer review process. We asked for these reviews to be sent to the Editorial Board, and they were not.

We have now been informed by our colleagues who reviewed the piece for a Special Issue that they rejected it as unfit to send to additional peer review, and they stated in an email to us:

“We would question the editorial process that has led to the publication of the piece. It was initially offered to guest editors Dr John Narayan and Dr Leon Sealey-Huggins as an article to consider for inclusion in the aforementioned special issue. The guest editors relayed their unease with the article and rejected considering the piece for peer review. It has subsequently come to light that the article was later reviewed as a standard article and rejected by at least one reviewer and then repackaged as an opinion piece.”…

The editorial board members then support the call for retracting the paper:

As the Viewpoint did not pass the double-blind peer review as claimed by the editor in the statement he issued in the name of the journal, it must be retracted and a new statement issued.

The Viewpoint fails criterion #1 of the Committee on Publication Ethics COPE guidelines that state: “Journal editors should consider retracting a publication if: they have clear evidence that the findings are unreliable, either as a result of misconduct (e.g. data fabrication) or honest error (e.g. miscalculation or experimental error).” These COPE guidelines are Taylor & Francis’s reference documents for ethics of retracting a publication…

Bruce Gilley’s Viewpoint essay, “The case for colonialism” must be retracted, as it fails to provide reliable findings, as demonstrated by its failure in the double-blind peer review process.

I don’t know what evidence has been used in other cases to support an accusation that “the findings are unreliable.” Is failure to pass peer review itself sufficient evidence?

(Thanks, again, to Clement.)

UPDATE 7 (9/22/17): Bruce Gilley has issued the following statement on his website: “I have asked the Third World Quarterly to withdraw my article ‘The Case for Colonialism.’ I regret the pain and anger that it has caused for many people. I hope that this action will allow a more civil and caring discussion on this important issue to take place.”