The 2016-17 edition of the American Association of University Professors’ Annual Report on the Economic Status of the Profession has been released. It provides a wealth of information about faculty salaries in the United States.

Inside Higher Ed does a good job summarizing a lot of the pertinent data, and they have a useful tool for searching through the information. Job candidates, especially, may want to have a look at the data there (and also here and here).

The information in this current report is not broken down by discipline, but here are some general findings from IHE’s report: 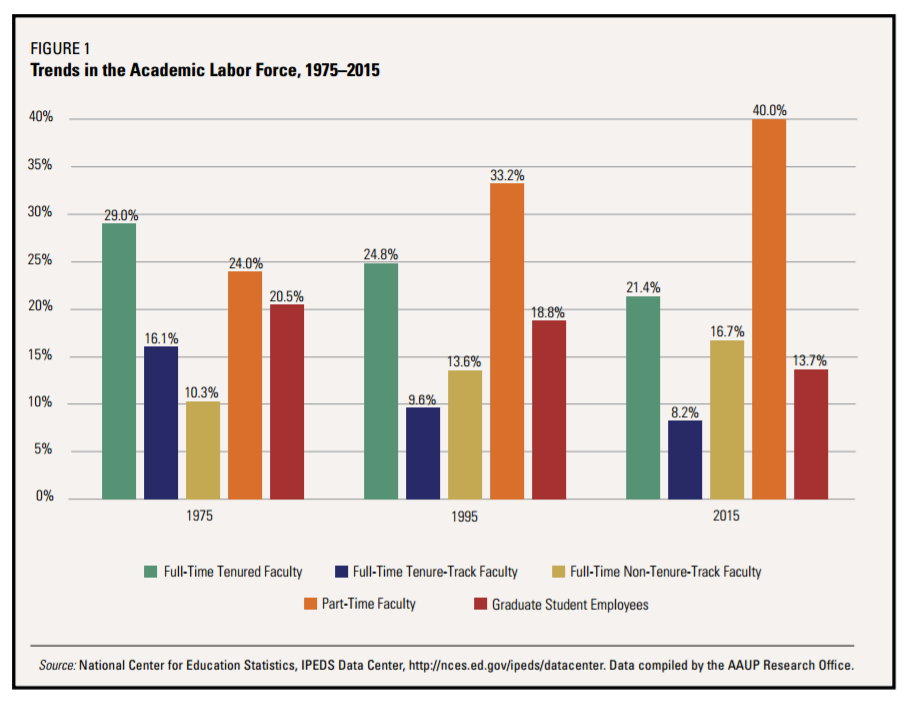 I have wondered about the following two hypotheses in relation to the % shift from tenured/tenure-track jobs to lecturer/adjunct jobs:
(H1) The shift results from the conversion of previous T/TT jobs into L/A jobs, e.g. after the retirement of a T prof, a L/A is hired to cover the T prof’s teaching load. Thus, the T/TT % goes down and the L/A % goes up.
(H2) The shift results from holding the # of T/TT jobs constant while the # of L/A jobs steadily increases, e.g. when a university needs to add 3 sections of some course to meet demand, the university hires a L/A to save money. Thus, since the # of L/A jobs increases while the # of T/TT jobs does not, the T/TT % goes down and the L/A % goes up.
Obviously, (H3) could be that both (H1) and (H2) are occurring.
People seem to automatically interpret the data (these charts we are given) as suggesting H1, but H2 could also account for the data and makes a lot of sense: increasing enrollments are now being staffed by cheaper labor, but that does not mean the actual NUMBER of T/TT jobs is DECREASING (only the percentage of such jobs relative to other types). We’d need numbers of jobs, not relative percentages, to determine that.
Of course, I suspect H3 is correct, and the question then becomes which of H1 and H2 is doing more of the “work” in accounting for the changes. But I suspect H2 is playing a big role.
Can anyone add anything fact-based to these reflections?Report

Eric
Reply to  Full Prof B

the drop in TT as opposed to T suggests more H1 than H2, though of course obviously H3 is correct.Report

Yes, but it’s possible that there was a boom of TT lines in the 70s, which then stopped and remained fairly constant, in terms of # of lines.

In other words, 16.1 : 29 is very high, imo — more than 1/3 of tenure line professors were not yet tenured in 1975! If then universities stopped creating more tenure lines, held them constant and just started hiring adjuncts/permanent lecturers for their teaching needs related to the growing student populations (i.e., just H2) we would expect to see that trend.Report

Full Prof B
Reply to  Eric

This piece (link below) from the Atlantic includes a chart similar in spirit to the one above (based on percentages), but then it adds this:

“This doesn’t actually mean that there are fewer full-time professors today than four-decades ago. College faculties have grown considerably over the years, and as the AAUP notes, the ranks of the tenured and tenure-track professoriate are up 26 percent since 1975. Part-time appointments, however, have exploded by 300 percent.”

That sounds a lot more like H2 to me.