The distribution of genders in graduate education in the United States vary by field. Does that distribution change at all when the focus is just on the most prestigious graduate programs? A new study by Kim A. Weeden (Cornell), Sarah Thébaud (UC Santa Barbara), and Dafna Gelbgiser (Cornell), “Degrees of Difference: Gender Segregation of U.S. Doctorates by Field and Program Prestige,” discussed recently at Inside Higher Ed, takes up this question. 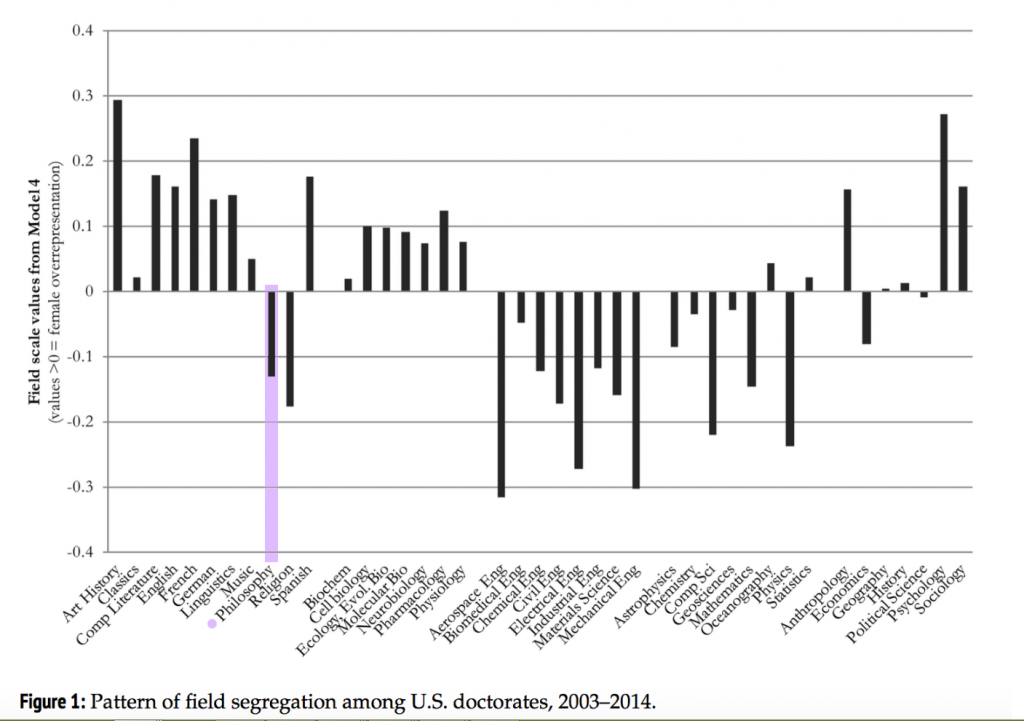 from “Degrees of Difference: Gender Segregation of U.S. Doctorates by Field and Program Prestige”

When prestige was brought in, using NRC rankings, the authors found, according to IHE, that, across all fields, “men are overrepresented in programs in the top three deciles but especially in the top decile.” Additionally, “top-decile programs are male dominated in 27 of the 41 research council-ranked fields, female dominated in four fields—Spanish, biomedical engineering, materials engineering and geography—and gender neutral in the remaining 10 fields.” 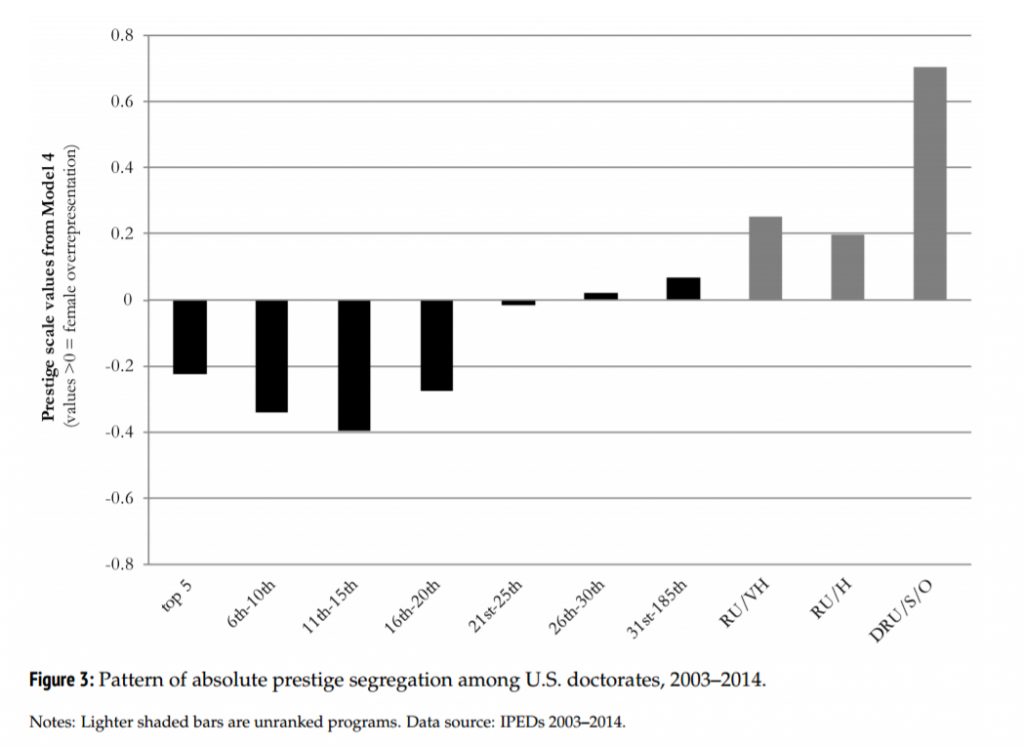 The initial study did not contain any specifics about how prestige (according to NRC rankings) affected gender ratios in philosophy, so I asked Professor Weeden about it, and she was kind enough to look at the data for us. She says that “prestige segregation in philosophy is fairly weak overall.”

UPDATE: The rankings used were the 1995 NRC rankings, owing to problems with the 2010 version and complications of its different “S” and R” weightings.

Not much of a gender effect by PGR rankings, looking at PhDs in Jennings’ huge job-placement database. Jennings and I have an analysis of this forthcoming in Public Affairs Quarterly. Women are only about 28% of recent US philosophy PhDs, but it doesn’t detectably vary by PGR ranking.Report

I just looked at this again, using somewhat different methods, since APDA is in the middle of a number of completeness efforts (using, e.g., ProQuest). Our graduates are labelled 1 if men and 2 if women (3 if unknown or non-binary, but there are no 3’s in this set). If I take the mean gender of each program, those with more men would be closer to 1 and those with more women would be closer to 2. Using the 2014 PGR, 48 unrated programs have a mean gender of 1.31, whereas 88 rated programs have a mean gender of 1.29. Correlation of 2014 PGR rating (higher score means more prestige) and mean gender (higher number means more women) for 88 programs is somewhat negative (-.1), meaning that programs with higher prestige tend to have fewer women, and vice versa. I think this is fairly easy to see in this graph, within which each program is represented by a point: https://twitter.com/cdj140/status/830139112044650496Report

Is the correlation statistically significant? The scatterplot is pretty cloud-like and I wonder if the trend would survive removal of that far-right outlier.

In any case, the slope is pretty close to flat. Our data on publication rates in highly-ranked journals are, in my mind, much more robust and striking as evidence for a relationship between gender and prestige in philosophy.

My hunch is that the gender ratios in philosophy do most of their divergence at the undergrad level between intro and completing the major and then again at the “superstar” level with full professorship in elite PGR programs and/or high levels of publication and citation in the elite journals.Report

No, the correlation is not significant. Doing this at the program level means having too few data points (88).

Can we see that at all reliably? It looks to he naked eye like noise, plus that one outlier on the far right pulling the graph around.Report

As Eric suspected, I am not finding significance in any of this, so it is reasonable to believe it is just noise. Then again, as you know, a stat is just a tool one can use in determining whether or not a trend in a data set is noise and it may be a real effect despite my inability to separate it from noise.Report

Actually, I am not finding significance at the individual level, either. I think you are right–the two programs with 100% women pulled the correlation down. Without them, the correlation is only -.04. And the polynomial without those two programs looks like a much healthier curve, with the right tail (higher percentage of women than average) only somewhat lower than the left (lower percentage of women than average), with both ends lower than those programs with closer to an average percentage of women. So if there is a prestige effect here, it is probably very small.Report

To clarify: by “divergence” here I mean gender ratios go down from about 50% to 20-something% between intro and completing the major, then stay in the 20-something% range from end of undergrad through assistant professor, then decline below 20% for full professor and for publication in Phil Review, Mind, J Phil, PPA, and Ethics. Not sure about this, but tentatively that seems to be what I’ve seen in various sources of data.Report

This sounds right to me.Report