The following is a guest post* by [an author who requested his name be removed from this post after ceasing to be involved in the relevant project] on an English translation of On the Tragic by Norwegian philosopher Peter Zapffe, known for his pessimistic views. 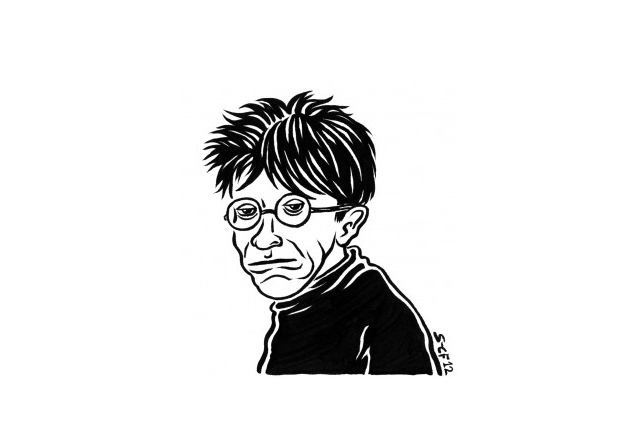 Portrait of Zapffe, by Stein-C

After 75 years of lingering in all but total obscurity to the English-speaking world, ————- and ————- have begun work on a complete English translation of Peter Zapffe’s magnum opus, On the Tragic. Following the publication of Zapffe’s Samlede verker in 2015, the manuscript is expected to go to press next year, with a preface by David Benatar.

But who was Peter Zapffe? As it happens, the present offers a superb lens.

Philosophical pessimism has grown significantly in visibility over the last decade, from Joshua Foa Dienstag’s Pessimism: Philosophy, Ethic, Spirit, reprint editions of several works by Emil Cioran, and Frederick Beiser’s Weltschmerz: Pessimism in German Philosophy, 1860-1900 to David Benatar’s Better Never to Have Been and the laborious 2,000-page translation of Giacomo Leopardi’s Zibaldone. In popular culture, this groundswell has perhaps been most prominently signaled by Nic Pizzolatto’s prince of pessimists, Rust Cohle, familiar to viewers of True Detective’s acclaimed first season. Following Pizzolatto’s crediting of horror writer Thomas Ligotti as a major inspiration and the much-publicized controversy in which Pizzolatto was accused of drawing too directly from him, Ligotti (a stark pessimist himself) has likewise grown in popularity, recently becoming one of only ten living authors to receive a Penguin Classics edition of his work. By all accounts, a dreary current is in the air. (Sympathizers will call it “reality.”)

But as Ligotti informs us in his dyspeptic manifesto and further contribution to recent pessimist literature, The Conspiracy against the Human Race, even the perspective expounded there owes much to yet another immediate predecessor still virtually inaccessible to English-speakers. Indeed, it is very likely because of Ligotti, more than any other single Anglophone, that awareness of and interest in this striking figure have begun to grow.

Re-enter Peter Wessel Zapffe (1899–1990), a little-known and even less appreciated Norwegian philosopher, humorist, environmentalist, and mountaineer. Heir to the great pessimistic currents of the nineteenth and twentieth centuries, and champion of what would become (via his friend Arne Næss) deep ecology and (via David Benatar) philosophical antinatalism, Zapffe is surely to be counted among the bleakest thinkers of all times and places. While the main arc of his pessimism is absorbingly epitomized in his early 1933 essay, “The Last Messiah” (one of his few works to be rendered into English), nowhere are its themes better or more fully expressed than in his masterpiece and 1941 doctoral dissertation, Om det tragiske (On the Tragic), an achievement that alone ranks him as one of the most original and incisive Scandinavian thinkers of the past century.

Forged under Nazi occupation in the blighted furnace of World War II (one instantly recalls the comparatively more optimistic Camus and Sartre), On the Tragic follows Schopenhauer in offering a trenchant analysis of the needs of living creatures. Unlike Schopenhauer, however, whose universal theory of the Will-to-Live yields with relative ease to abstract presentation, Zapffe’s account of tragic existence is irreducibly genealogical, falling more closely within the ken of existentialism in its focus on the distinctly human condition. There, Zapffe locates the emergence of human consciousness, with its incorrigible but (in his view) unfulfillable need for a metaphysical meaning of life, inescapably between pacifying self-censorship and meaningless intellectual honesty, dooming the species to its eponymously tragic fate.

To call On the Tragic a testament to its grim time would be a great understatement. Yet to discount it as merely a canon of and for its time is to invite the conjecture underlying Zapffe’s very thesis—that perhaps we don’t really want to know.

To whet your appetites for the somber, Gisle Tangenes has authored an outstanding summary of the “cheerfully pessimistic, mountain-climbing Norwegian existentialist”: The View from Mount Zapffe.

I am so excited for this — thank you for helping to bring Zappfe’s work to the English language. I’m teaching a class this semester on cosmic pessimism, and “the Last Messiah” is a favorite of my students.

And in the interest of utterly shameless self-promotion, might I recommend Prescott’s “What Pessimism Is.” Journal of Philosophical Research, Vol. 37 (2012), pp. 337-356.Report

Hello, are you by any chance affiliated with the /lit/ (literature) forum on the image board 4chan? Several members of said message board started a similar project not long ago, and IIRC at least one of them was fluent in German and part of the academia.Report

“There, Zapffe locates the emergence of human consciousness, with its incorrigible but (in his view) unfulfillable need for a metaphysical meaning of life, inescapably between pacifying self-censorship and meaningless intellectual honesty, dooming the species to its eponymously tragic fate.”

This, my friend. This is why I suggested Westworld to you.Report

You should have Ligotti do an Afterword or a blurb for the book. His book The Conspiracy Against The Human Race was the #1 bestselling philosophy book on Amazon for a while. He is also one of a handful of living authors to be published by Penguin Classics.Report

I don’t know if these comments are still monitored, but if they are, I would be very interested to hear an estimation of when the translation and printing are expected to be finished.Report