Some people go to PhilPapers, get the information they need, and then just go. Not Valentin Lageard, a graduate student in philosophy at Université Paris-Sorbonne. The Categories page at the site caught his eye. He says:

The completeness of their taxonomy was striking and I thought : “Could it be possible to map this taxonomy ?”. I decided it was a nice idea and i started to work on it.

The first step was to select the kind of graph and since their taxonomy includes a hierarchy permitting to sub-categories to be children of more than one parent categories, I selected a concentric circles graph.

Because I’m a python user, I choosed Networkx for the graph part and BeautifulSoup for the scraping part. Furthermore, since Philpapers gives the articles number for each category, I decided to add this data to my graph.

After some configurations of the display, I finally reached my goal: a map of the taxonomy of philosophy.  And it was quite beautiful.

[See update, below, for the more detailed 5-layer version] 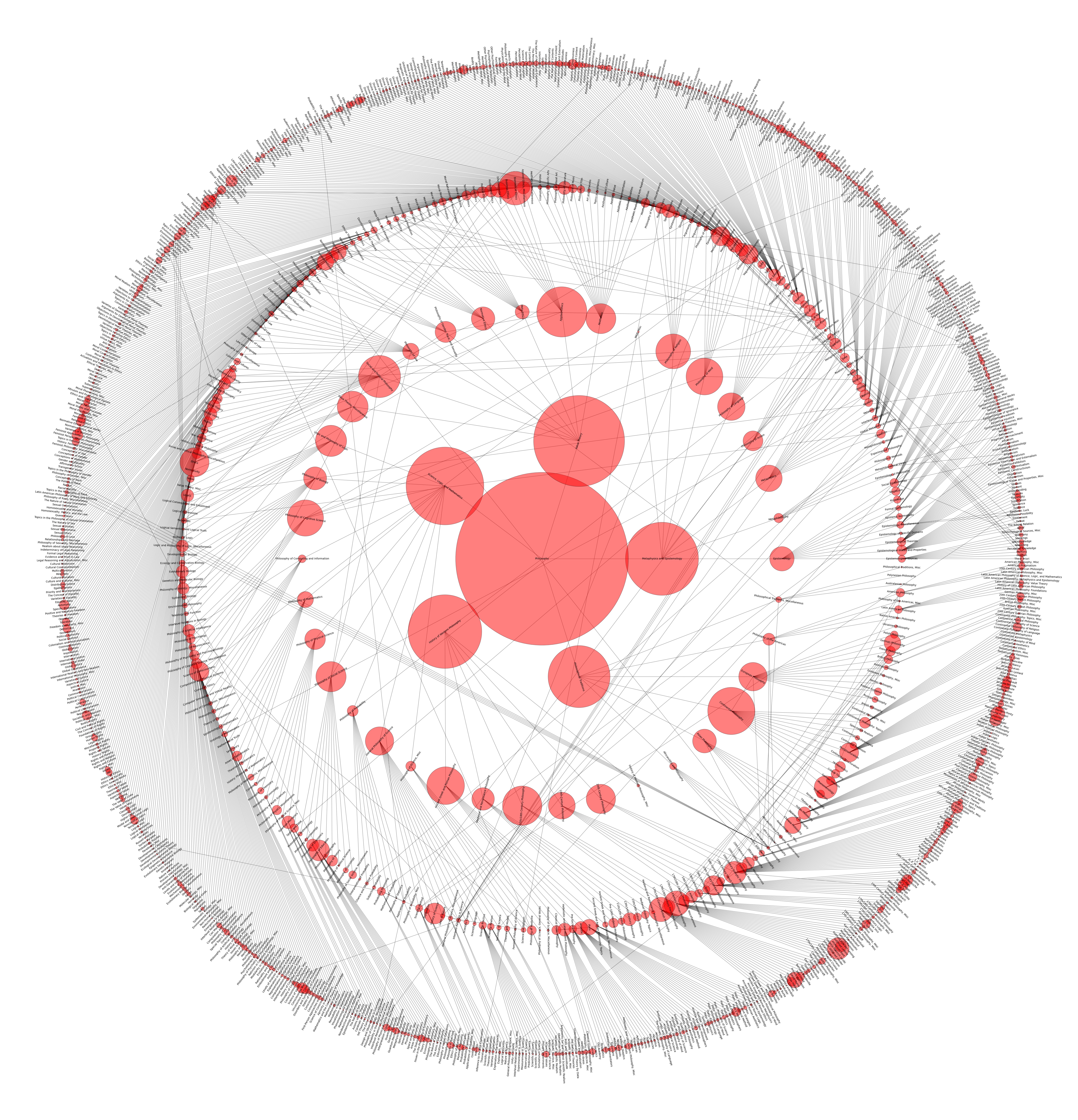 Valentin Lageard – “Map of the Taxonomy of Philosophy”

Map Legend — Size of nodes: number of articles in this node. Relations between nodes : parent/children relation between categories.

Larger version here (open the link a in new tab or window) and here.

(via Michael Glawson and Kelly Nelligan)

Earlier updated deleted.
NEW UPDATE: Here is the 5-layer version. You can view it in more detail here (open it in a new tab or window for best results). 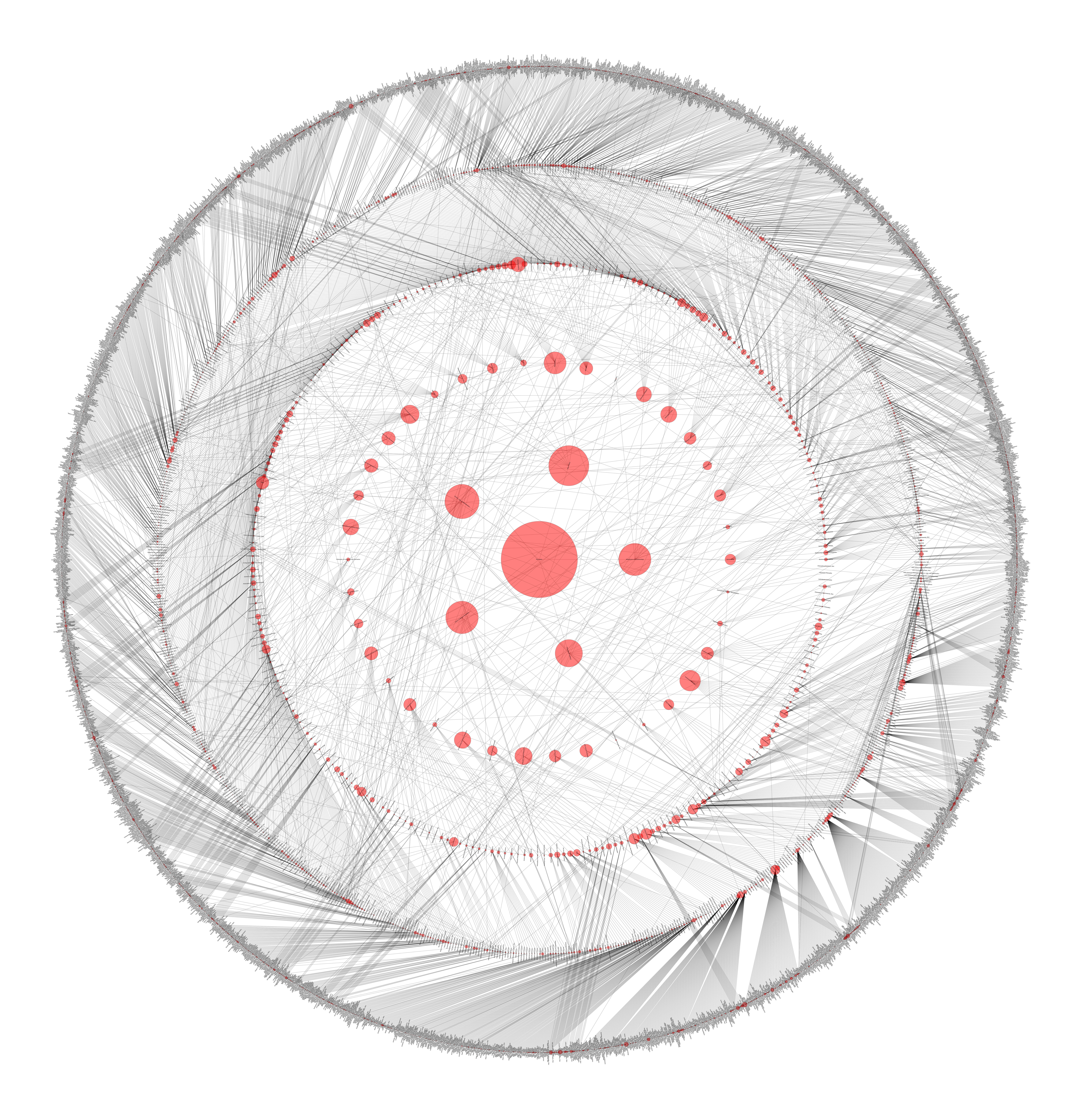 UPDATE 2: One thing I like about this image is that it strikingly—perhaps overwhelmingly—depicts the number and kinds of different philosophical areas of inquiry. It is the perfect thing to show those people who falsely fancy themselves know-it-alls about philosophy: the pandering politician, the overconfident scientist or science popularizer, even that guy in philosophy class. As an exercise, starting at the outermost ring, just have them put a star near the areas they know anything about. There won’t be many stars.

An impressive amount of work and well done. Thank you!Report

Fabulous. This would be a great poster to have in the department lounge!Report

LOOks like pythagoras was important in the making of your map.Report

valentinlageard
Reply to  David Moroleon B.

Yes it was useful indeed 🙂Report

That latest iteration is simply mind-blowing! When I looked at it all I could think of is M. Lageard, looking at his finished product in triumph, channeling his best Russell Crowe in Gladiator, appropriately in the center of an amphitheater not unlike the beautiful diagram itself:

This is an impressive piece of work. The process of developing it had to be as challenging as it was instructive.

While I appreciate and learn from work like this, the relationships denoted are, in McIntyre’s language, essentially contestable. A very different network might be equally valid. In my opinion, the most sound use of such typologies — whether represented semantically or visually — is to stimulate thought that will ultimately lead to the advancement of knowledge.

I have one other concern. I see a strand in the comments that imputes value to complexity in its own right. While there is no practical limit to how much complexity philosophers can introduce in their work (in my opinion, often unnecessarily), seminal work in philosophy is more likely to answer heretofore troublesome questions by reorganizing, coalescing, and simplifying a conceptual domain, often through the introduction of new assumptions and perspectives.

Philosophy makes no meaningful contribution merely by showing how complex relationships can be made to appear. On the other hand, tools such as this can facilitate the very forms of progress I find most important.Report

Very cool map!
I would love to see a similar map, but with links to literary works as well as authors contributing to each of mapped domain.
Would that be possible?Report