The new, self-titled album by The Counterfactuals, a rock band that is 3/4 philosophers, has just been released. Below is a review of it by Michael Crawford, and below that is the opportunity to win some band merch.

What’s immediately striking about this eponymous release from Minnesota indie rock quartet The Counterfactuals is the broad array of influences. The opening track, “Fading From Bright”, soars with reverb-drenched guitar, suggesting Laurel Canyon-inspired expanse even as it closes with a clear homage to the noisy experimentations of the 90’s Chicago indie and post-rock movements. Elsewhere, the group draws heavily from Americana and early rhythm and blues while simultaneously incorporating sounds and effects culled from sources as diverse as chamber music and Krautrock. While it’s tempting to try and pull off a great synthesis at the expense of cohesion, the soaring vocals and lyrical depth allow the album to maintain focus despite the breadth of the sonic palette.

There is no shortage of narrative structure, either, as the album moves with an deliberative and sense ebb and flow. Textures pop in and out, and the tracks run together without significant upheaval– quite the feat for any full-length recording. The standout “It Won’t Sting For Awhile” follows the gentle and elegant “You Turn the Tables So Well”, the former swelling in with atmospheric guitar as the latter finally eases up. Immediately after, the track moves into a swinging waltz as Groll’s fuzzy vocals and tender guitar lines sit on top of spacious, orchestrally-inspired percussive work. The track’s tension releases with the album’s high point: Groll’s aching falsetto ascending as he laments things left unsaid.

The album closes with the poignant (and almost hymn-like) “In My Grave”, a minimalistic and image-rich meditation on mortality and finitude. It’s refreshingly honest and straightforward, with a distinct lack of the twists, turns, and left-field textures that anchor the the rest of the album’s arc. My guess is that there’s just no room for that sort of thing here, given the darker and more focused nature of the lyrical content. This is a move worth applauding, and it might even be a good candidate for an instance of the elusive notion of “taste”. There’s something mature and endearing about knowing when to shut off all the distractions and get to the point, and that is a shifty sort of skill that the group manages to show off here, as they do throughout.

Michael Crawford is an M.A. candidate in philosophy (2017) at the University of South Carolina. He also serves as drummer and percussionist for ET Anderson as well as for a number of other artists and projects (sometimes of his own devising).

Scroll down for an opportunity to win stuff from the band! 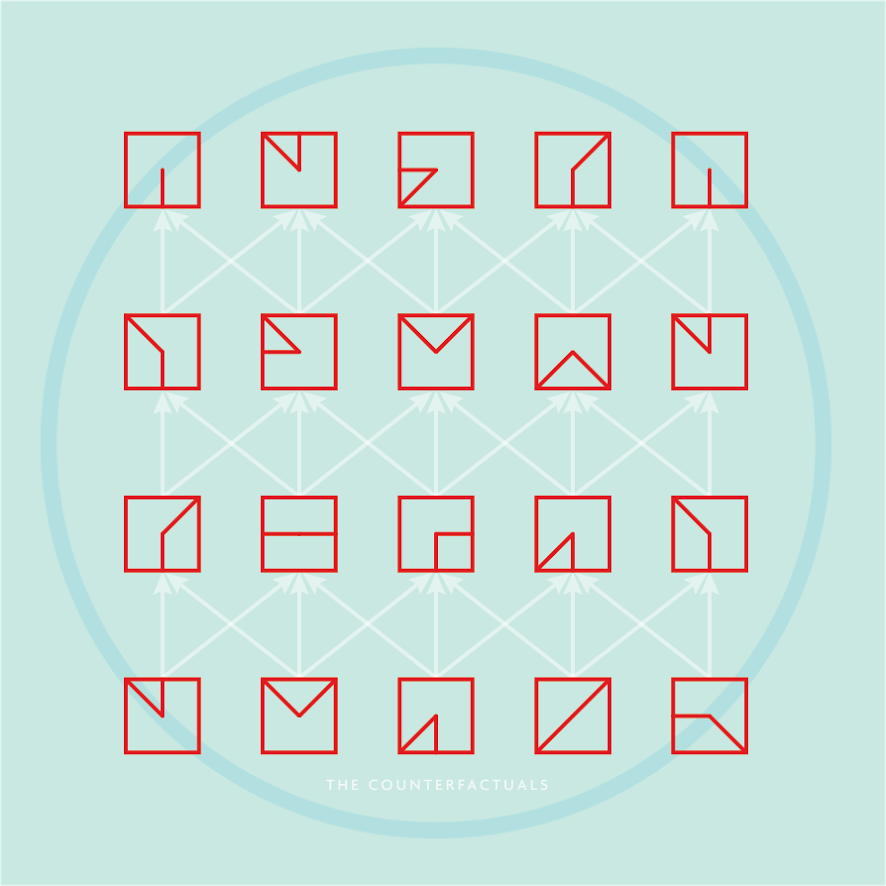 Daniel Groll, singer and guitarist with The Counterfactuals, writes:

In an effort to instantiate megalopsuchia, The Counterfactuals are giving away merch! But you have to work for it. The band likes to make nods, some subtle, some not, to other bands that they like. If you would like your choice of a CD, LP with download or t-shirt with download be the first to answer ONE of the following questions (I, Daniel Groll, will be in touch to see which one you want). If you know more than one, keep it yourself so the megalopsuchia can be spread around. That’s what Aristotle would have wanted.

There’s a typo, albeit one I find entertaining, in the image caption. I’ll admit to worrying about my understanding of eponymous.Report

Is the answer to #1 “Heaven”?Report

Nope! Have to back to the album before that. The opening couple bars are basically identical…Report

Nice album! I’ll take a guess at 1, though it could be several of their songs — is it “Heaven”?Report

Apparently I got snaked on my guess for #1, although it wasn’t up there when I posted (I blame a conspiracy at the highest levels of DailyNous). I’ll guess #3, though this could also be a couple songs, but is it “I Want the One I Can’t Have”? The guitar riff in that song under the vocals sounds like the hook you guys have in Hindsight.Report

I’m sorry to not be at the SK library (and thus in Northfield) this summer; I hope the folks who are make it down the hill to catch you in town.Report

Daniel Groll
Reply to  Karl A.

Nope! Have to go back to the album before that. The openings are (cough, cough) almost identical for the first few barsReport

Oops. Replied to the wrong comment. It’s not Baby’s On Fire (which, incidentally, is amazing song). But you’re on the right album. It’s before we get to BoF.Report

Karl A.
Reply to  Daniel Groll

So “Needles in the Camel’s Eye” then? (I thought for sure you had in mind the weird musical tic at the beginning of the solo from BoF, but that might be because I like that song particularly.)Report

Daniel
Reply to  Karl A.

Ding ding! Yeah, I had in mind the jangly dissonant guitar notes. Drop me a line at dgroll(at)carleton(dot)edu and we’ll go from there.Report

Is the answer to number 3 Ask?Report

Well then, is the answer to #1 “Blue As Your Blood”?Report

It sure is! Drop me a line at dgroll(at)carleton(dot)edu and we’ll go from there. Thanks!Report

Then is #3 “Is It Really So Strange”?Report

Yup. The rhythm of the opening hits is the same. Drop me a line at dgroll(at)carleton(dot)edu and we’ll go from there. Thanks!Report