“I must say, it is rather addictive, and sometimes really satisfying.”

That’s Massimo Pigliucci (CUNY) writing at Plato’s Footnote about the digital humanities—in that line, specifically about using Google’s Ngram Viewer, which, he adds, “philosophers make surprisingly little use of.”

In his post, Pigliucci notes that philosophers were among the early adopters of some forms of digital humanities: the Stanford Encyclopedia of Philosophy, for example (the start of which predates Wikipedia), and one of the very first online open-access journals, Philosophers’ Imprint. And new examples have sprung up, such as PhilPapers, InPhO, and other journals, like Ergo. See here for more examples of digital humanities in philosophy.

But how useful are some of the newer tools for philosophy? Pigliucci writes, skeptically:

Just like in any discussion of “the old fashioned ways” vs the “new and exciting path to the future,” there is hype and there is curmudgeonly resistance. An example of the first one—in the allied field of literary criticism—is perhaps an article by Bill Benzon (2014), which begins by boldly stating that “digital criticism is the only game that’s producing anything really new in literary criticism.” It is obvious to retort that new may or may not have anything at all to do with good, however.

The standard example mentioned in this context is the work of Stanford University Franco Moretti, a champion of heavily data-based so-called “distant reading.” The idea, which can easily be transferred to philosophy (though, to my knowledge, has not been, yet) is that instead of focusing on individual books (classical, or “close” reading), one can analyze hundreds or thousands of books at the same time, searching for patterns by using the above mentioned Ngram Viewer or similar, more sophisticated, tools. It seems, however, that this cannot possibly be meant to replace, but rather to complement the classical approach, unless one seriously wants to suggest that we can understand Plato without reading a single one of his dialogues, for instance.

Still, they could be of some value:

Distant reading is not the only approach that legitimately qualifies as an exercise in the Digital Humanities, and an interesting paper by Goulet (2013) is a good example of the potential value of DH for scholarship in philosophy. The author presents some preliminary analyses of data from a database of ancient Western philosophers, spanning the range from the 6th Century BCE to the 6th Century CE. The survey concerns about 3,000 philosophers, confirming some well known facts, as well as providing us with novel insights into that crucial period of the history of philosophy. For instance, it turns out that about 3.5% of the listed philosophers were women—a small but not insignificant proportion of the total. Interestingly, most of these women were associated with Epicurus’ Garden or with the Stoics of Imperial Rome. Goulet was able to identify a whopping 33 philosophical schools in antiquity, but also to show quantitatively that just four played a dominant role: the Academics-Platonists (20% of total number of philosophers), the Stoics (12%), the Epicureans (8%), and the Aristotelian-Peripatetics (6%), although he notes an additional early peak for the Pythagoreans (13%), whose influence rapidly waned after the 4th Century BCE. Goulet is able to glean a wealth of additional information from the database, information that I would think from now on ought to be part of any serious scholarly discussion of ancient Greco-Roman philosophy. 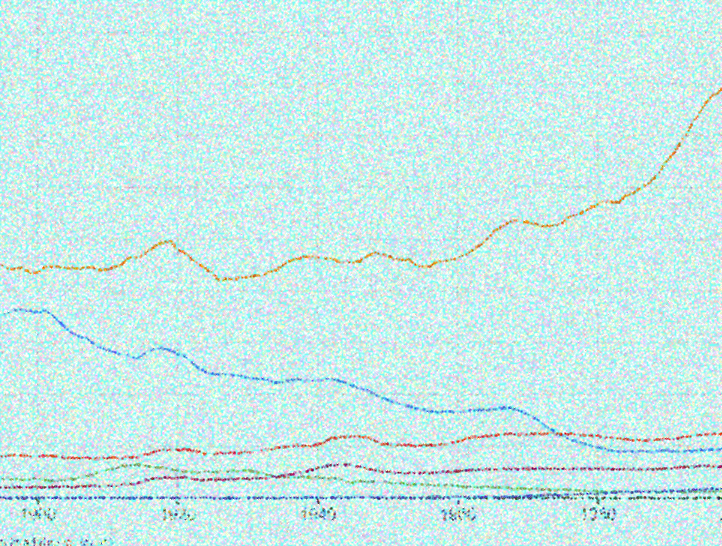 I make use of data from the Google NGram database in my paper “No Grist for Mill on Natural Kinds”; https://jhaponline.org/jhap/issue/viewIssue/15/2
That meant downloading the relevant parts of the dataset and searching it myself, because the on-line NGram Viewer is too imprecise in several respects.
I began work on that paper when I was finishing up my book, and I put one of the graphs in the opening chapter where I discuss the history of “natural kind” talk. A referee for the press complained about it. I don’t remember the specific words, but the referee thought the graphs were somehow unserious. So they didn’t end up in the book.Report

Corpus-based or digital humanities-type techniques can be used in philosophy in all sorts of ways. Corpora made up of philosophical texts have been used to test claims in the history and sociology of philosophy. Claims about how words are used can often be tested by reading a sample of occurrences of the word in more general-purpose corpora (like the BNC or the Santa Barbara Corpus). (I’m thinking about possible worlds semantics for “actually” – but we could always use a healthier diet of examples.) I could imagine ways in which big diachronic written corpora could be useful to philosophers of science working on questions about theoretical terms. Chris Potts does corpus-based work on implicature and other phenomena of interest to philosophers of language. In my dissertation, I test claims in moral psychology (versions of situationism, claims about gender differences in moral orientation) and claims in ideology critique (about the class interests represented by conventional morality) using an annotated corpus of spoken American English.Report

Arianna Betti at the University of Amsterdam is working on a project to track conceptual change over time using digital humanities methods.

I’ve also found the search functionality of http://www.nietzschesource.org valuable in making arguments about his philosophy. A lot of Nietzsche scholarship is a cesspool in which people make unsupportable claims about trends, terms, etc. The Nietzsche source is a good way to squash such claims.

P.D. beat me to mentioning his work. The other philosopher I know of who has used ngrams in their work is me, in “The Rise of ‘Analytic Philosophy’ ” https://www.academia.edu/25598597/The_Rise_of_Analytic_Philosophy_When_and_how_did_people_begin_calling_themselves_analytic_philosophers_ . This paper uses ngrams to address the questions “when and how did people begin attaching the label ‘analytic philosophy’ to philosophical work, and using the term ‘analytic philosopher’ to describe themselves and others?”
This is a chapter in the forthcoming book Innovations in the History of Analytic Philosophy, edited by Sandra Lapointe and Chris Pincock.Report

I do this too! See my How intuition exploded (http://onlinelibrary.wiley.com/doi/10.1111/meta.12127/full) which was discussed last year on Daily Nous (http://dailynous.com/2015/04/08/rise-of-the-intuitions/). As previous comments note — if you want to do any precise analytic work using ngrams data then you need to download the data rather than rely on the web interface.Report