Thomas Pogge, the Leitner Professor of Philosophy & International Affairs and Political Science at Yale University, has published a response to allegations he sexually harassed and retaliated against a student, Fernanda Lopez Aguilar.

Pogge begins by noting that he is limited in what he can say, and then summarizes his defense: 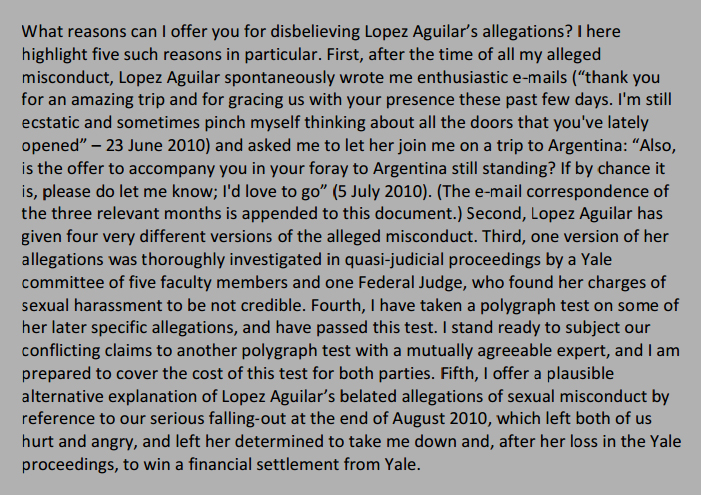 The last matter, which is gone into in some detail, regards the letter from Pogge to Lopez Aguilar offering her employment as a junior fellow in Yale’s Global Justice Program.

In his statement, Pogge claimed Lopez Aguilar’s assertions had already been disproven: “One version of her allegations was thoroughly investigated in quasi-judicial proceedings by a Yale committee of five faculty members and one Federal judge, who found her charges of sexual harassment to be not credible.”

The panel’s actual finding was that there was “insufficient evidence” with which “to corroborate either Ms. Lopez’s or Mr. Pogge’s differing accounts.”

On his Facebook page, Pogge said he was making “another attempt to see” whether BuzzFeed “will allow the other side to be heard.” He did not reply to requests for further comment.

• Jonathan Jenkins Ichikawa (UBC), in “The Presumption of Innocence,” writes:

The presumption of innocence is rightly considered a pillar of civilised society. But people have a tendency to over-apply it in irrelevant cases. The presumption of your innocence means that the state can’t punish you for a crime unless it proves that you committed it. That’s it. It has nothing to do with how one individual should treat or think about another, or whether an organisation should develop or continue a relationship with an accused individual. The presumption of innocence doesn’t protect you from being unfriended on facebook, or shunned at conferences, or widely thought by other people to be a criminal. It just protects from being criminally convicted…

The admonition not to pass judgement about the allegations is simply the admonition to ignore them. “Don’t believe anything unless it’s been proven in a court of law.” But this is just a ludicrous epistemic standard. Do you care whether powerful men in academic philosophy are using their stature to coerce students into compromising sexual situations? Then you should be interested in credible testimony to the effect that this one has been. Don’t be tempted by the fallacious inference from it hasn’t been proven in court to you have no way to tell whether it’s true.

• Eric Schliesser (Amsterdam), in “On Pogge, Polygraphs, and Pseudo-Science,” writes

“Most psychologists and other scientists agree that there is little basis for the validity of polygraph tests”… It does not follow that Pogge’s denials are wholly false. But it does follow that his offer to pay for additional polygraph tests, while perhaps sincere, is based on bullshit.

UPDATE (5/23/16): Pogge has posted a new version of his reply to the allegations by Fernanda Lopez Aguilar that includes the emails he had mentioned in the original version (alternative link here).

Note: comments require a social media login or a working and accurate email address. Pseudonyms are permitted, but do not use ones with “anonymous,” “anon,” and the like in them; and use only one. For more details, please see the comments policy.