“I love being a professor. I have been a professor my whole life. I don’t know what I am going to do.” That’s Pamela Ryan, who has been a philosophy instructor at Morehead State University for 15 years. This past Friday she was called into the office of the Dean of the Caudill College of Arts, Humanities, and Social Sciences at Morehead, M. Scott McBride, and told that her contract would not be renewed and that her position is being eliminated. Unless something changes, this coming Friday she will be out of a job. Because she was a contract employee, she says, she will not qualify for unemployment benefits or health insurance.

Professor Ryan says that over the course of her career at Morehead she was among the “top-rated” teachers on campus and that her recent peer and student evaluations have been excellent. Indeed, the elimination of her position doesn’t appear to have anything to do with her performance. She was an excellent instructor, but excellence provides no protection for contract academics.

In this case, the university claims to face a budget crisis—it even decided not to pay its faculty and staff over Spring Break to save money. Part of its plan to get out from under its $9.7 million budget deficit is to eliminate some positions, based on a study of academic programs there. In an email to faculty and staff, Morehead University President Wayne D. Andrews said:

“These position eliminations were not an easy decision to make and I recognize the grave difficulty this will impose on 30 of our current employees and their families… We will follow our personnel policies related to position elimination and reduction in force as we implement these cuts and provide appropriate support to those individuals impacted.”

In the meanwhile, supporters of Professor Ryan have started an online petition to save her job (the text of it contains an error—she was at Morehead for 15 years, not 25). Many students have shared their thoughts about her on the petition site. For example:

I had 1 class to completion with Pam Ryan, and had it on recommendation from some friends as a good class to fill my schedule. I cannot say how thankful I am for the course as it allowed me to think of concepts not covered in my usually STEM fields, how to think critically, how to be a good person, and how to view the world through compassionate sunglasses. I was a self-centered, hateful, and angry young man with no real aspirations of helping people. After taking eve the base level class with Pam an interest in philosophical thought flourished that is still a key virtue of my character. The people that know me best know that I would not be the person I am today without the guidance of Pam. If any professor is an amazing asset it’s her.

On one reading, Professor Ryan’s career may just be the casualty of politics and poor budgeting. In March, the governor of Kentucky, Matt Bevin, said he would be cutting $1.95 million (4.5 percent of the state’s appropriation to the school) during the fiscal year that ends June 30th, and the university had to respond. Even so, it is important to recognize the real and detailed consequences of these large decisions. Politicians and administrators planned poorly, and as a result a philosophy instructor’s career is on the line.

But there may be more to the story. For over a decade she was the only woman on the philosophy faculty. While she taught, presented work at conferences, and published, she says, “as a single mom of two young children, [my male colleagues] simply could not understand why I could not publish more or travel more. When a tenure track position came open, this was held against me.” She adds, “By the time my kids were old enough to allow me to do more of my own work, the opportunity for publishing and getting into TT jobs was passing by. I hadn’t been able to publish anything in a while between trying to keep my job and take care of two kids. I often reflect on how different my life would be if I were male.”

I have been told not to raise ‘holy hell’ about this. I have never raised holy hell. I am insulted… I’m not supposed to ask or complain. I am constantly encouraged to be paid less, do more and be grateful about it.

I don’t know if it is possible to stop Dr. Ryan’s position from being eliminated. But if you are interested in trying, you can add your name to the several hundred signatories here, and write to Morehead University President Wayne D. Andrews at [email protected]. 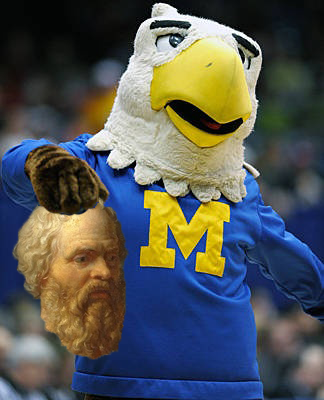 The issue here is, I think, the intersection of the issue of the precarious position of adjunct faculty (which may well be a symptom of a broader failure to see any value in education, rooted in good ol’ American anti-intellectualism) and the precarious position of female scholars. Adjunctification hurts everyone in the field, and it hurts women most. She’s getting the double-whammy. This is why I think that feminism has to be part of the solution to our broader issues as a discipline.Report

Dr. Ryan was exploited and then fired by Morehead. It is that simple. Adjuncts, learn your lesson. Get out now. Sadly, American education will suffer as only the most desparate adjuncts will dominate the teaching pool, the ones with absolutely no other marketable skills or ability to negotiate with other humans.Report

There is another narrative that might be put around this situation than Starfish’s, which is that other members of Dr Ryan’s profession might try to mobilise and support her in this situation, and apply pressure on her employer to reconsider their decision. There but for the grace of God, etc.Report

In reaction to some of the arguments libertarians had been giving for keeping adjunct pay low, I’ve been asking economists who work on pay issues in industry (profit and nonprofit) about adjunct pay. They are struck by how low-paid adjuncts are, even though they bring in so much income for a University through teaching. (Adjuncts are “cash cows.”) I’m now pretty convinced that Universities and Colleges do not make budget decisions very well (not even when they attempt to measure output) and wonder if, in schools with faculty governance at least, some of the methods used by those who can analyze pay might not be learned by faculty. If so, it could be one way to point out pay that is not standard (too low for what other industries offer people who bring in so much income) and budget decisions that are not even economically efficient. It would be something for meeting expectations or basic decency fails to work.Report

Dr. Ryan is not an adjunct. She is a non-tenured lecturer. She has benefits, and is full time. Having said that, I am very distressed to see what is happening to her. Administration, in times of financial crisis, does not trim administration, or the salaries of the highest paid. They go after the low hanging fruit-non-tenured people, part-timers, and anyone else low on the totem pole. It’s very sad, and really inexcusable. Pam is a friend of mine, and my husband and I both had classes with her. I hope MSU reconsiders this wrong headed decision, but if not, I hope she finds something better.Report

This scenario for Pam is egregious and heart-breaking all the way down. I hate it. But I am a little troubled by the suggestion that it is primarily due to gender. Rather, it seems due to terrible work-life balance expectations. I know many pro-children male colleagues in the same exact scenario–they are very frequently looked down upon and passed over as ‘uncommitted’ or ‘unreliable’ for being involved in their children’s lives at cost of travel and publishing. Pam seemed to suggest being looked over for these behaviors would not be the case if she were male. But in fact, it still is the case. Caring about kiddos is not a female thing, its a human thing, and job markets/hiring committees would do well to realize they have to make room for people who care about their children, regardless of male or female. You get dinged if as a male because people think you’re not supposed to be an active parent, and you get dinged as female because you’re not committed to the job. Horrible either way. It is atrocious that our market is one in which the extent to which you care about your kids is the extent to which your academic success will be hampered. That said, we need to make it okay for both men and women to care about their kids, rather then seeing them just unreliable or uncommitted.Report