CORRECTION: It appears that, contrary to what I initially posted, Professor Tooley did not write the report mentioned in this post. I was provided a link to the report by a source who prefers to remain anonymous, was told it was by Tooley, and it is hosted on Tooley’s site. However, according to this page, the author of the report is one James Murphy. My apologies to both Professor Tooley and to James Murphy for this mistake. I have edited the post to correct this.

UPDATE (12/17/14): Since some have asked, let me say that I do not know who James Murphy is (this letter,also posted on Tooley’s site, suggests that he is or had been unknown to at least some members of the CU philosophy department, too). Professor Tooley informs me that “James Murphy” is not a pseudonym of his. Nor, contrary to this comment, do we have any reason to believe that the James Murphy in question is the James Murphy of LCD Soundsystem.

UPDATE 2 (12/17/14): I would like to note that the document that’s the subject of this post (at least the original version, which has been removed from the Professor Tooley’s website and is reportedly being revised) is, it seems, authored by someone who is using a pseudonym. That is one’s prerogative of course, but I don’t think it is unreasonable to be somewhat more cautious in accepting controversial claims when they are made anonymously (cet. par.). For example, the document contains an accusation about the members of the APA CSW site visit team that, as far as I know, are not only unsubstantiated but also have been explicitly denied by those involved with the site visit. Specifically, the document contains the accusation that the site visit team broke a “confidentiality promise” to the department when it provided a copy of its report to CU Dean Steven Leigh and Provost Russell Moore. Yet members of the site visit team have said that they were directly told that Dean Leigh, Provost Moore, and Chair Forbes had jointly commissioned their report, and as far as I know there is no reason to doubt this.

(Let me add that I initially found the document newsworthy because I was under the mistaken impression that it had been authored by a member of the department who had personally witnessed the events at Colorado, who, in virtue of that, could provide some insight into them, and who would take responsibility for making the claims, clarifying and defending them as needed. Had I realized it was a document authored by an unknown someone outside of the department, it would have not received this kind of publicity.)

James Murphy has written a 12-page report entitled “The Colorado Sex Scandal: How Ideology, Incompetence, and Abuse of Power Ruined a Great Department,” hosted on University of Colorado professor of philosophy Michael Tooley’s website (note: this part of Tooley’s site is currently down, and there is a note here explaining that the document is being revised). In it, he recounts the various events at Colorado that have been discussed here and elsewhere, occasionally with some new details, and provides background commentary on the approach of the U.S. Department of Education’s Office of Civil Rights (OCR) to Title IX enforcement and how he takes sexual misconduct to be viewed and treated in academia. He interprets many of the recent relevant actions by the CU administration to be designed to “create publicity supporting their intended ‘national leader’ image” on Title IX issues and “to deflect blame away from themselves” (p.2) He also complains about the lack of due process protections for the accused in campus sexual misconduct proceedings.

Murphy claims that the university threatened to “shut down the entire department, firing everyone” following the 2013 site visit by a team from the American Philosophical Association’s (APA) Committee on the Status of Women, and “has maintained the ‘shut down’ threat since then, but with the conditions for dissolving the department left vague, so that department members are left in a general state of fear concerning anything that might displease the administration” (p.6). The local chapter of the AAUP investigated and reported that the administration’s tactics “perpetuate a climate of fear and disregard for the academic freedom and due process protections of faculty at the University of Colorado” (p.7).

Below I reproduce the penultimate section (pp.11-12) of Murphy’s report on what he takes the “long term consequences” of these events to be for Colorado’s department of philosophy. 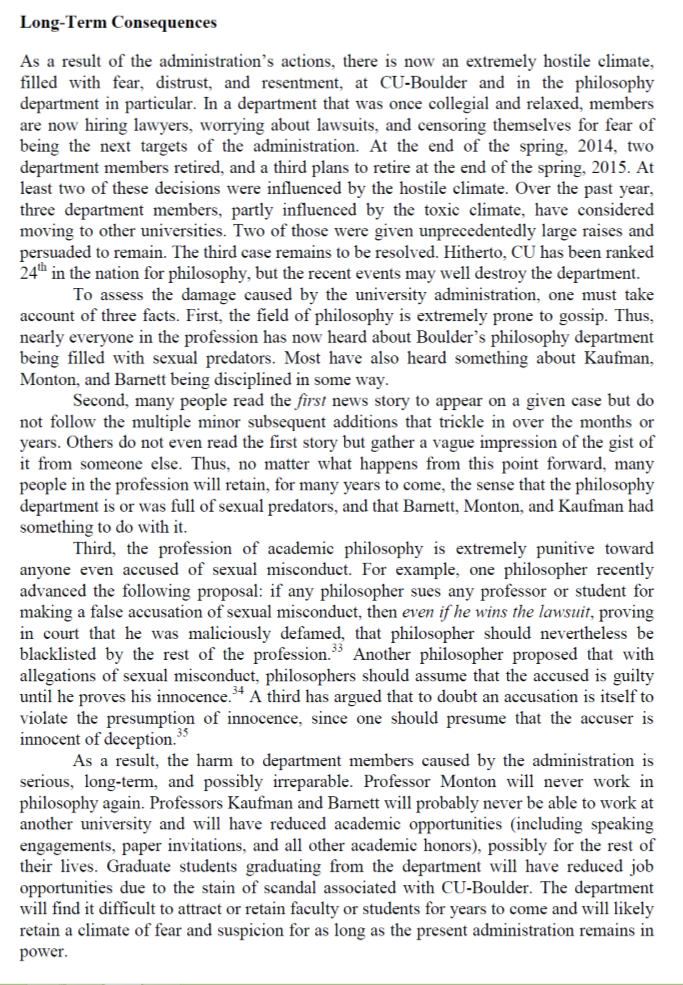