As reported a few days ago, Marquette University philosophy graduate student and instructor Cheryl Abbate has been the subject of defamatory and hostile politically-motivated blog posts by Marquette associate professor John McAdams. The story has predictably spread across the internet, and has now appeared on the Fox News website with a lying headline, typical slant, and a slew of comments you should not read if you ever again want to have the will to get out of bed in the morning (references to the “girl professor’s thought control agenda,” “militant gays,” “Stalin,” and, of course, “Obama” are just the tip of the iceberg). As a result, she has been receiving quite a bit of hate email. Here is one representative piece: 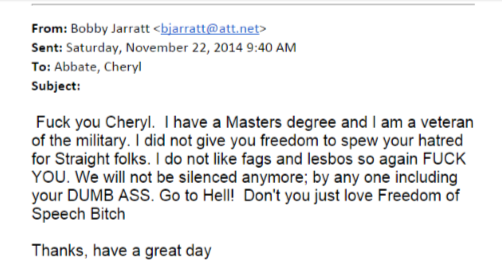 Fortunately, support for Ms. Abbate is coming from several quarters. People have been writing administrators at Marquette, including the president, Michael Lovell (email him at [email protected] or tweet to him at @PresLovell @MarquetteU). I sent in a letter. David Boonin wrote an excellent letter to the dean. John Protevi posted his great letter here. If you wish to, you are welcome to post your letter, in whole or part, in the comments below (though don’t feel any pressure to do so).

Local support is growing, too. The chairs of several departments met about the issue and sent a letter to the Marquette University administration, which is posted here.

I hope that others at Marquette and elsewhere voice their support and that the university, at the very least, takes a public and official stand on the matter.

I want to reiterate those points to the entire Marquette community. We are dedicated to uphold academic freedom and to maintain an environment in which the dignity and worth of each member of our community is respected, especially students. We deplore hatred and abuse directed at a member of our community in any format. Please know that we listen to any member of the campus community who expresses concerns alleging inappropriate behavior. As stated in our harassment policy, the university will not tolerate personal attacks or harassment of or by students, faculty and staff. To be clear, we will take action to address those concerns. ​I understand that emotions may run high during discussions and debate, inside and outside of the classroom. But let’s not lose sight of the need to maintain respect for each other.

Also posted on the original story (I just saw this new post), but here is my letter of support for Cheryl:

I am a fellow graduate student of Cheryl Abbate. I am also a lecturer in the philosophy department, and teach Applied Ethics in the Health Sciences and Theory of Ethics. Cheryl and I entered Marquette’s Philosophy program together in 2011. I can say, perhaps with more certainty than anyone, that Cheryl is an exemplary scholar, teacher, and member of the Marquette community.

To put things into perspective, this is Cheryl’s fourth year at Marquette. In her short time here, she has secured six publications in very prestigious philosophy journals. She has served as an academic role model for me for the past 3 1/2 years, and I would not be where I am without her. She is an irreplaceable member of the philosophy department. Marquette should be honored to have her as a student.

Cheryl is also a very dedicated and hard working teacher. She goes above and beyond in her ethics class, in which she teaches the contemporary application of ethical theories and also challenges her students to be ethical in their everyday lives. That her pedagogy has become the center of such a harmful political smear campaign is a disgrace to Marquette, and a threat to academic freedom and our right to moderate classroom discussion. I know that what happened to Cheryl could have happened to any of the other graduate students in the philosophy department.

Marquette philosophy graduate students teach the majority of the Phil 1001 and 2310 classes. We are thus very important members of the Marquette community, as we teach important core courses that are a fundamental to the Marquette curriculum. Your silence on the issue of the attack against Cheryl is deafening.

John McAdams and his blog have in the past caused harm and controversy that is a stain on Marquette’s image. This time he has taken it to a whole new level when he attacked a graduate student–threatening her national image and her future job prospects. The FOX news article has led to Cheryl receiving awful hate mail. This is something no student should have to experience, especially at a Catholic, Jesuit University. That Marquette has not taken any public stand against this man and his actions is unbelievable to me. McAdams previous conflicts with the philosophy department aside, his attack on a student is a public disgrace.

You can still do the right thing–you need to publicly condemn McAdams actions and assert your support for Cheryl. As an exemplary student and teacher, Cheryl deserves nothing less than Marquette’s full support.

McAdams is something of a crank and has been known as such for many years. A quick glance at his recent blog where he comes close to advocating for intelligent design shows as much. But for those in need of more evidence: