A philosophy graduate student and instructor at Marquette University is the target of a political attack initiated by one of her students, facilitated by a Marquette political science professor, and promulgated by certain advocacy organizations.

Cheryl Abbate, a Marquette PhD student working on a dissertation in ethics, has provided me with information about the series of events leading to the campaign against her. She currently teaches an ethical theory class. At one class meeting in October, the topic was Rawls’s equal liberty principle. To help elucidate the principle, Abbate asked her students for examples of policies that would violate the principle. Suggestions from students included a ban on marijuana use and seat belt laws. One of the students also suggested that a ban on gay marriage would violate this principle, since it involves denying a group of people a basic right the granting of which would not at all limit the liberties of others. Other policies were then discussed.

After class, a student approached Abbate and complained that she had not allowed a discussion of gay marriage and so he was not able to voice an objection he had to it. His objection concerned research which purported to show that children raised by same-sex parents turn out worse than children raised by heterosexual couples. Abbate pointed out that adoption by same-sex couples had not been under discussion, and that, further, there was no sound empirical research she knew of that supported his claim. She invited him to email her references to such research. She also noted that certain objections to gay marriage would be offensive to homosexual students in the class.

At the next class meeting, Abbate, thinking that other students might have thoughts similar to the one who approached her, decided to address such concerns directly. She mentioned the objection, described her replies to it, elaborated on the criticisms of the study the student had been referencing (by Mark Regnerus, which has been thoroughly discredited), and noted that class time is limited and that there isn’t time to adequately discuss all topics of interest.

A couple of weeks later, Marquette associate political science professor John McAdams wrote a blog post about the incident. He apparently based his post solely on the report of the complaining student. This is how he describes what happened in class: “She listed some issues on the board, and came to ‘gay rights.’ She then airily said that ‘everybody agrees on this, and there is no need to discuss it.'” That is not merely a condensed version of the events; it is entirely misleading. McAdams continues in his blog post to heap scorn on Abbate. He accuses her of being the type of person who thinks that “opinions with which they disagree are not merely wrong, and are not to be argued against on their merits, but are deemed ‘offensive’ and need to be shut up.”  She is described as having “intolerant views.”  The post rails against “the politically correct world of academia” and the idea that we should be concerned with offending people and yet laments that “Christians and Muslims are not allowed to be ‘offended’ by pro-gay comments.” He adds: “it is a free fire zone where straight white males are concerned.”

The Foundation for Individual Rights in Education (FIRE) picked up on the story and simply took McAdams’ account as accurate. The Catholic Education Daily did the same. FIRE describes this as an episode of “free speech being chilled.” Thus, basic classroom management, as well as one of the key characteristics of philosophical pedagogy—keeping the discussion of a question focused on the question without veering onto tangents—becomes the focal point for a complaint about political correctness, and in the process, a graduate student’s reputation is threatened.

The university is committed to maintaining an environment in which the dignity and worth of each member of its community is respected, it will not tolerate harassment of or by students, faculty, staff and guests or visitors…. Harassment is defined as verbal, written or physical conduct directed at a person or a group based on color, race, national origin, ethnicity, religion, disability, veteran status, age, gender or sexual orientation where the offensive behavior is intimidating, hostile or demeaning or could or does result in mental, emotional or physical discomfort, embarrassment, ridicule or harm. Harassing conduct can be either a single incident or a persistent pattern of behavior. Harassment includes not only offensive behavior that interferes with a person’s or group’s well-being or development, but also such behaviors that interfere with one’s employment, educational status, performance, or that create a hostile working, academic or social environment.

There are certainly interesting pedagogical questions about how to discuss potentially offensive topics without violating harassment policies (and I encourage such questions be taken up in the comments). However, the event at the center of this controversy does not appear to be one of speech being shut down because it is offensive. Rather, the comment was off-topic and based on false claims, and the instructor needed to make a decision about how to use limited class time, especially given the topic of the lesson and the subject of the course (which is ethical theory, not applied ethics). Further, as any professor knows, points may be made in offensive and inoffensive ways, and particular students may be more or less skilled at putting their ideas into words that make for a constructive contribution to the lesson. In light of these factors, it is well within the rights and responsibilities of the instructor to manage classroom discussion in a way she judges conducive to learning.

An additional and important issue here is what Marquette University is or is not doing to protect Ms. Abbate. Not only are false and damaging things being said about her by a professor at her own university (not the first time this professor has attacked people online; see this) and by various organizations parroting his claims, but she has now become the target for viciously hostile comments on some websites. Here is a screenshot from one: 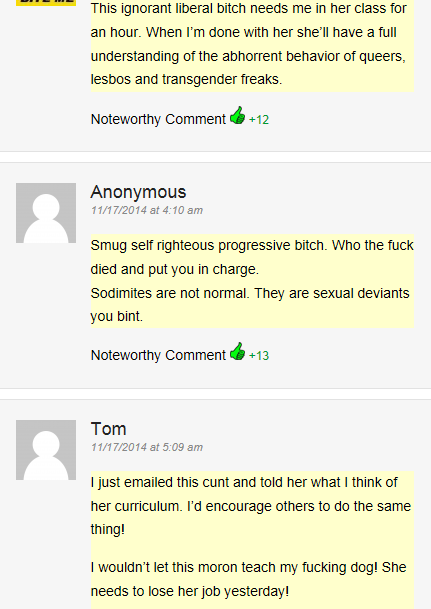 (Notice the upvotes on these comments.) [update: The above is a screen shot from IOTW Report.]

Abbate reports that her department has been supportive but I am not aware of any positive steps that Marquette University has made to publicly declare their support for Abbate and defend her against these attacks.

UPDATE 2: In addition to writing to the aforementioned administrators, readers may be interested in signing on to an open letter in support of Ms. Abbate that has been posted at John Protevi’s blog.

UPDATE 3: Susan Kruth of FIRE (Foundation for Individual Rights in Education) responds to this post here. My reply is here in the comments, below.

UPDATE 4 (11/19/14): McAdams states on his blog that he wrote to Abbate and asked for her side of the story. He wrote her at approximately 9am on Sunday, November 9th and published the original piece on his blog 9 hours later. One might think that the professor would know that this is an insufficient window of time, for it would be wise for a graduate student instructor to consult her chair or other administrators at the school (about school policy, or FERPA, good teaching practice, etc.) before divulging information about student behavior, in writing, to a third party such as himself, and that people sometimes are difficult to contact or check their emails less frequently on Sunday. If he was really interested in hearing her side of the story, he would have waited to hear back from her. What was the rush? Let me also share that his email (which I have a copy of) begins with the line, “I’m working on a story about an after class confrontation you had with a student.” Notice how this assumes there is actually a news story here, prior to hearing from Abbate. That doesn’t quite inspire confidence in the fairness or accuracy of his reporting. Finally, let me add that McAdams sent this email to Abbate from his official university email address, and in doing so gives the impression that his inquiry is official university business. This makes it all the more imperative for Marquette University to make a public declaration of support for Abbate and to explain that it does not condone professors using university resources to conduct politically-motivated witch hunts that target its students.

UPDATE 6 (11/21/14): Fox News has picked up on the story. The article, posted today, starts with a lying headline and is clearly meant to rally the troops. Ms. Abbate has written to tell me that she has already received hate mail as a result of the Fox News article. As of now, Marquette has yet to make any public statement supporting Ms. Abbate. I have been informed that the decision to release any such statement will have to come from the university level, and so I urge concerned parties to write to Marquette University President Michael Lovell at [email protected] asking him to step up and publicly support Ms. Abbate.