The above photo is a detail from a large, hand drawn chart entitled “Mathematical Logic and Foundations, 1847-1947.” It was made in 1976 by Joel Friedman (I believe this Joel Friedman, emeritus at UC Davis). A print of it has been hanging up in the University of South Carolina Department of Philosophy for as long as anyone here can remember. I do not know whether it was widely distributed or how many copies still exist. I photographed it (two photos, stitched together, owing to the size and detail), and you can view the whole thing here.

UPDATE (10/29/14): Dana Tulodziecki (Purdue) writes in: “I saw your post about the Math Logic poster and thought the two attached letters might be of interest to you.  They were found in Ted Ulrich’s old office (now mine).” And what she attached was a letter that Joel Friedman, the chart’s creator, sent along with copies of the chart, and an accompanying note from— wait hold on a sec, I just got an email—

Well, tollens my ponens will you look at that, it’s an email from Joel Friedman! Just as I am typing this update! Seriously! I had written him the other day but hadn’t heard back yet. Let’s see what he has to say…

“Yes, I am the author of the ML Chart you have posted.” Check.

“Apparently your website is so popular that four of my own UCD Philosophy colleagues emailed me about it afterwards.” [Blushing.]

” I have about 20 copies left.” A few folks contacted me about wanting to purchase copies; now’s your chance! (Contact Friedman, not me.)

Was it ever published?

At the very beginning, I tried to get my Chart published by a number of publishing companies, but alas, they all concluded it would not be cost effective.  Even Prometheus Publishers, after doing a marketing analysis, concluded they couldn’t make it cost effective, even though they liked the Chart very much.  Perhaps this problem can now be overcome.  I don’t know.  In any case, I copyrighted this Chart and self-published it long ago.

And now for the chart’s background and creation:

I finished my doctoral dissertation at UCLA in 1966, in logic and foundations of set theory, providing a new theory, called STC (“the set theory of proper classes”), which turned out to be stronger than the von Neumann/Bernays/Goedel theory of sets and proper classes.  (For example, Tarski’s Axiom of Strongly Inaccessible Cardinals can be derived in my STC.)  My doctoral supervisor was the prominent logician and philosopher of mathematics, Abraham Robinson.  He was a real prince of a man, as well as a great mathematical logician.  From 1966 to 1971, logic and foundations was my exclusive field of research, and I was hired at UC Davis in 1967 to teach various courses in this area.  After 1971, I branched out into other areas of philosophy, over the decades, primarily philosophy of mathematics and science, metaphysics, philosophy of mind, and early modern philosophy (Descartes, Spinoza, and Leibniz).  Over the last 15 years, during my retirement, I have focused my research primarily in modal logic and philosophy of mathematics and science, developing a new philosophy called Modal Platonism (MP), first begun when I was a Visiting Fellow at Princeton University (1998-99), working with Bas van Fraassen.  I can tell you this MP project is still thrilling to me.  Lately during the last several years, I’ve been consulting about MP, with my old teacher/mentor at UCLA, David Kaplan, who was also on my doctoral committee with Robinson.  Altogether van Fraassen, Otávio Bueno, Kaplan, and Bernard Molyneux (a UCD colleague) have been most instrumental in spurring me on to the completion of this project.  My latest draft paper is called: “Modal Platonism is a Threat to Platonism”.

Anyways, logic and foundations has remained my passion periodically, in one form or another, especially since 1965, nearly 50 years ago, when I began working on my dissertation under Robinson. But at some point, around 1975, I got the idea of making an ML chart while living in San Francisco for the summer.  The idea was to make a chart of the greatest mathematical logicians (including mathematical foundationalists), during the Golden Age of ML, from 1847 to 1947, listing their main technical results inside the “bubbles” under their names.   What is unique about my Chart is that you can estimate the importance of each great mathematical logician by the size of the bubble containing his/her results.   Note that De Morgan and Boole are giants in the Chart, because they are first, but the real giants are Frege, Cantor, Russell, Hilbert, Post, Skolem, Tarski, von Neumann, and Goedel, at least according to the bubbles in the Chart.  After writing up a final draft of my Chart, in my own poor handwriting, I hired a philosophy graduate student, Christina Waters [here?], to write up this same final draft using her wonderful penmanship in India ink.  I then had the first hundred copies printed by a professional, using his Heidelberg Press.  In its day, that was a high-tech machine.

Professor Friedman seems pleased that his chart has been given a “new life.” Pretty neat! Anyway, where was I? Oh yes, apart from the aforementioned letter from Friedman (which the above excerpts from his email render largely superfluous) there was an accompanying note from a fan of the chart: 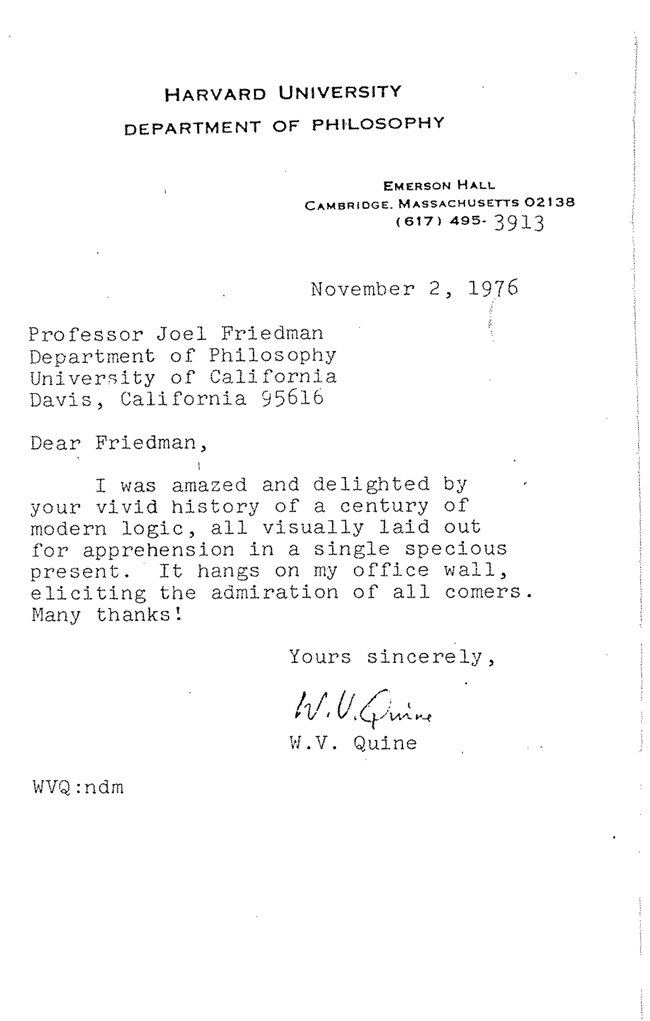 Thanks to Dana Tulodziecki for sending this along, and to Joel Friedman for filling us in on the story of his wonderful chart.

UPDATE 2 (10/31/14): Josef Kay (UC Davis) comments below: “Joel Friedman and I are meeting tomorrow to discuss the possibility of making the chart available as a print for online order. David Goldman has recommended looking into society6.com as a means of selling prints, which seems like it might be a good choice. If anyone else has any advice or recommendations for how to go about doing this (e.g. if there is a better alternative website), I’d appreciate the input. I’ll report the outcome to this blog.”

UPDATE 3 (10/31/14): Friedman sent Christian Koons (Bowling Green) a photo of a photocopy of his diagram of Spinoza’s Ethics, which he passed on to me—thanks, Christian!—and which I post below. If anyone wants to send a higher res version along, I can post that, as well. 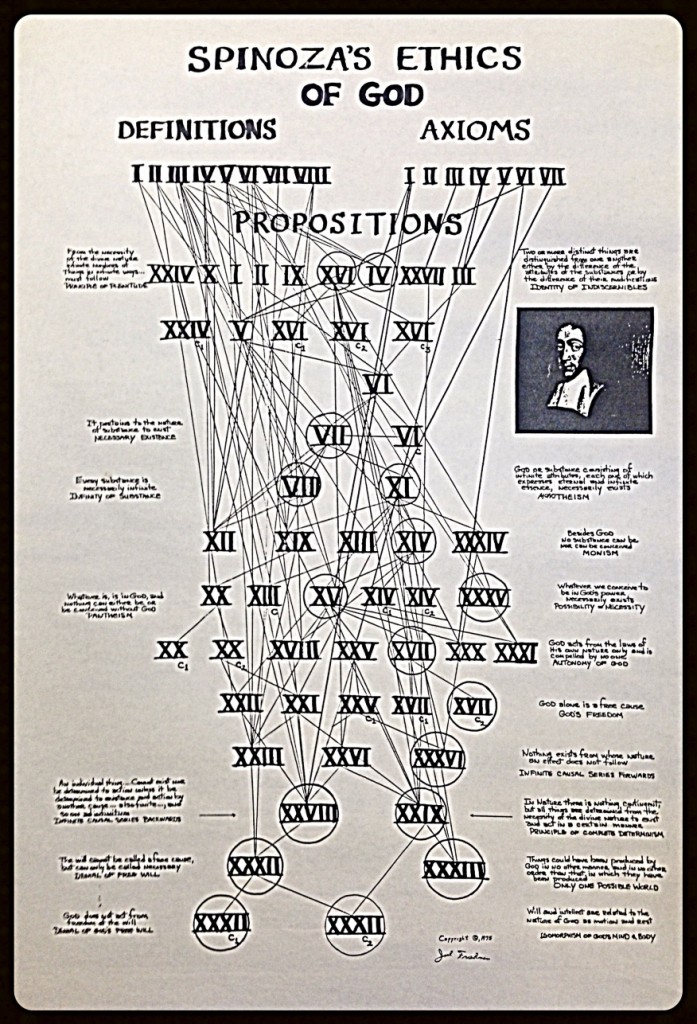 For what it’s worth, there’s a copy of this up in the department in Buffalo as well. It’s really a pretty helpful document.Report

There was a copy at Virginia Tech when I was a student there a few years ago. I bet it’s still there.Report

The copy at Virginia Tech was there in 92, and I know i’ve seen it elsewhere…Report

Anyone have a picture of that?Report

It dates back to the early 90’s at least. It was circulating around Indiana U at the time. (I wonder if Michael D brought his over to USC.)Report

I didn’t, but now that you mention it, I do remember seeing it at IU as well.Report

If he’s still interested in publishing this as a poster, there are plenty of websites out there (society6.com, for instance) that let you upload an image and sell prints. I’m guessing a pretty good-quality scan would be necessary. They handle all of the production and the actual transactions (and, I assume, take a hefty cut of the sales).

I don’t know about what they’re like to interact with from the artist’s side, but I have ordered prints from society6 in the past and they were very well-produced. If Friedman is interested in making this more widely available (and it sounds like a lot of people are interested), it might be worth looking into.Report

Joel Friedman and I are meeting tomorrow to discuss the possibility of making the chart available as a print for online order. David Goldman has recommended looking into society6.com as a means of selling prints, which seems like it might be a good choice. If anyone else has any advice or recommendations for how to go about doing this (e.g. if there is a better alternative website), I’d appreciate the input. I’ll report the outcome to this blog.Report

It was on a pillar next to a cash register at the IU bookstore for years, until around 2002. A friend convinced them to let her copy it, so I’ve had it hanging on my wall for a decade. The reason the bookstore took it down, an employee said, is that they became annoyed by all the requests for copies.Report

Hi. Any news about the poster being able to order the poster online ? Would be great.Report

Sam Duncan on Philosophy's Most Beautiful Sentence or Paragraph

Some other people have already quoted a lot of the prettier lines from Kant, so I'll go with two that, while not beautiful, are quite […]

Julia on Going To Grad School Despite the Odds

My fallback plan was to be a philosophy high school teacher in Germany. I went to undergrad there and took all the necessary classes for […]

BLOGIC is an interactive online textbook covering the standard syllabus in logic taught by most American philosophy departments. Topics include: Symbolizing argumentsTruth tablesNatural deduction for propositional logicModels for […]

Rollo Burgess on Going To Grad School Despite the Odds

For what it is worth and to offset some observations here about survivorship bias: I was doing a Masters and was considering doing a PhD, […]

Simplicissimus on Article Spotlight: "The End of History" by Hanno Sauer

It seems that the background assumption of the paper is that philosophy has made some kind of progress, and that today we stand in a […]

It hasn't been updated in a while, but the bottom half of my teaching page has a cluster of resources for undergraduate students about academics

Preston Stovall on Teaching and Writing About Abortion in Idaho (and elsewhere?)

Maybe I'm missing some glaring detail, and I confess that it's late on St. Vaclav's day so I'm not at my level best. But why […]