A recent survey of publications in experimental philosophy provides a picture of the field’s growth and range.

X-phi has undergone roughly four developmental stages over the past two decades, namely, the initiation period (2000–2005), the development period (2006–2010), the expansion period (2011–2015), and the plateau period (2016–2020). Although works in the first period had paved the way for later development of this experimental approach to philosophical inquiries, the key umbrella term “experimental philosophy” did not come into widespread use until 2006. Since then, it has remained at the center of heated discussion. Over the next fifteen years or so, x-phi evolved from negative research programs with the slogan of “burning the armchair” to the more positive and interdisciplinary projects that embrace more armchairs, becoming a fascinating part of the broad enterprise of cognitive science. This characteristic change of x-phi is showcased in part by the wide array of research topics covered in this area and in part by the diverse academic journals that host the scholarly output on these topics.

Let’s turn to the data. Here’s a look at x-[hi’s growth, in terms of numbers of publications, since 2000:

Annual number of publications in x-phi in all categories, 2000–2020. (From “Twenty Years of Experimental Philosophy Research” by Jincai Li and Xiaozhen Zhu.)

The most popular of x-phi’s subfields is ethics, Li and Zhu find, followed by epistemology and philosophy of mind: 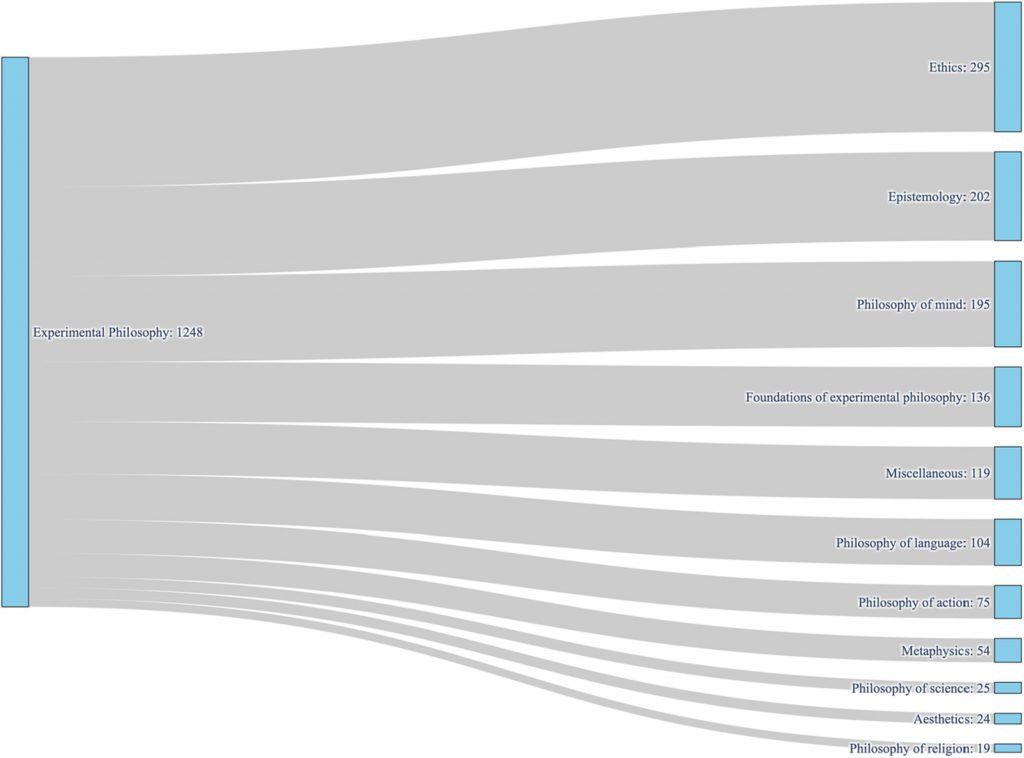 Number of experimental works in each subcategory published in the period 2000 to 2020. (From “Twenty Years of Experimental Philosophy Research” by Jincai Li and Xiaozhen Zhu.)

In which journals is x-phi typically published? Philosophical Psychology, Review of Philosophy and Pyschology, and Mind and Language lead the list, report Li and Zhu:

The authors also provide a list of the thirty most “influential” publications in experimental philosophy, using citation rates adjusted to take into account the “time effect of publishing”. Their metric, “relative citation rate” (RCR) is arrived at by dividing the number of citations of a work by the average citations of any paper in the same year it is published. Here are the top ten from that list:

In discussing their findings, Li and Zhu say that “To move out of the plateau stage and make further progress in a sustainable manner, experimental philosophers need to expand their research territory and upgrade their tool kits.” You can read the whole article here. Discussion welcome.

Yes, I had the same question. I thought the Railton paper fell on the latter category, but I might be misremembering.Report

I hope the authors of this paper will join the conversation themselves — and it will certainly be very helpful to hear their thoughts on all of these issues — but the answer to this particular question seems to be pretty clear from the description of the methods within the paper itself.