December 2022 saw the publication of the first two issues of the Journal of the History of Women Philosophers and Scientists (JHWP). 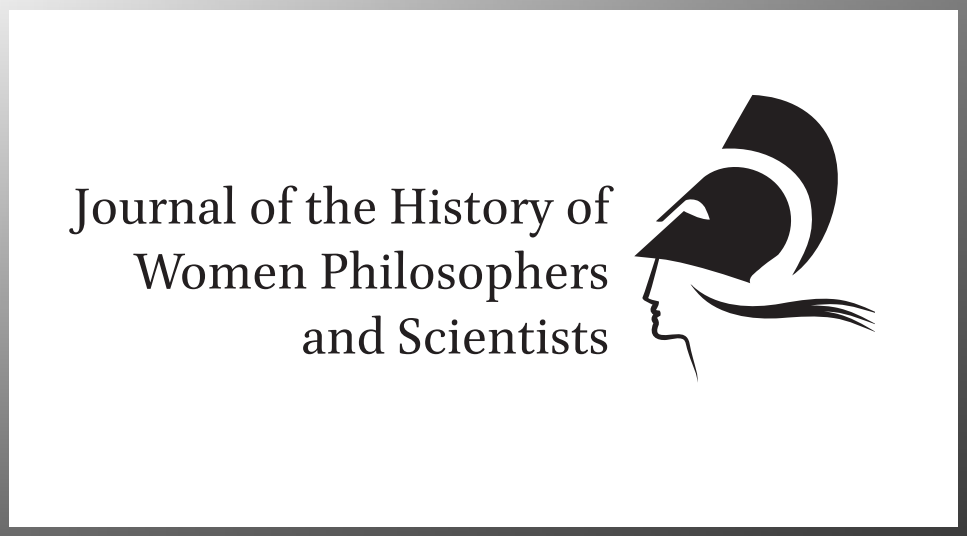 The journal, which makes use of double-anonymous peer review, publishes two issues per year, with each issue focusing on a particular theme so that “each issue is a collected anthology of continuing interest.”

While the journal is not entirely open-access, several pieces are unpaywalled, and the publisher is providing individuals with free access to all of the journal’s content through the end of 2024 with the use of a token (explained here).

In their foreword to Issue 1, Volume 1, Professors Hagengruber and Waithe write:

Anyone who studied philosophy with open eyes could not fail to notice that from the very beginning, women philosophers have had an important function in the history of philosophy. How could we philosophize without starting with Plato and Socrates, and ignoring Socrates’ female teachers? And yet this has been the reality in the institutions of philosophy teaching, in universities, schools and academies, worldwide.

Philosophy and its traditions have been taught only in part. It was as if Newton had only measured every other planet to determine the dynamics of dependencies. How was it possible that so many famous names were mentioned but not taught? Theano, Diotima, Aspasia, Hildegard of Bingen, Teresa of Avila, Margaret Cavendish, Elizabeth of Bohemia, Anne Conway, Émilie Du Châtelet, Olympe de Gouges, Mary Wollstonecraft, and Harriet Taylor Mill never completely disappeared, even though they had been eradicated from the patriarchal canon of institutional teaching. Early in the 1980s Mary Ellen Waithe started to bring these ideas and their authors together in a four-volume set, compiling much of the knowledge that was accessible before the creation of the internet. Waithe documented the biased philosophical approach to philosophy’s history. While many great philosophers did not care to name the women by whom they had been influenced, Plato, Descartes, Leibniz, Kant and Mill did name them, yet even today, some ignore that reality. Not all philosophers are right. The history of philosophy itself needs to be critically examined. One of the most important factors contributing to rewriting the history of philosophy in a more reliable way is to bring in women’s ideas. That will demonstrate the epistemological gain of works that have long been suppressed or ignored. No loss of knowledge is good.

While the ideas of women have been presented separately and cut off from the canon for many decades, now is the time to bring it together, to rewrite a history of philosophy that is more complete than it has been up to now. Working together for now and the future, we participate in the creation of anthologies, translations, encyclopedias, conferences, symposia, research programs and curricula devoted to reclaiming, restoring and reconsidering what women’s contributions have been to our discipline.

Philosophy is the mother of all theoretical academic disciplines. Accordingly, the net we cast through this, the Journal of the History of Women Philosophers and Scientists, is necessarily broad. We welcome contributions on the whole history of philosophy, from antiquity to the present day, and we also welcome discussions on women philosophers who do not belong to the Western tradition of philosophy.

The field of philosophical disciplines here at stake includes all traditional fields that belong to the field of philosophical discipline practiced today, ethics, metaphysics, epistemology, anthropology, logic, philosophy of language, philosophy of science, mathematics, philosophy of religion, and so forth. Here, however, we stretch even further. Precisely because women have often and for so long been excluded from academic philosophy, and consequently have published in and were contributors to related sciences, their texts and analyses find their space here. The Journal of the History of Women Philosophers and Scientists provides a scholarly venue for discussing works by women who have made significant contributions to what is now the academic discipline of philosophy as well as to the theoretical foundations of other disciplines, including the physical sciences, mathematics, social sciences, medicine, economics, religion, and so forth. We are the venue for examining the ideas of scientists such as Ada Lovelace or Grete Henry-Hermann, and theories developed by theorists from Mary Sommerville to Florence Nightingale, from Hildegard of Bingen to Oliva Sabuco, from Hazel Kirk to Charlotte Perkins-Gilman. We welcome also articles on philosophy of religion ranging from Rabiy’a al ad’Wadia to Julian of Norwich, and from ‘A’isha al-Ba’uniyyah to Teresa of Avila. We also welcome articles about women’s contributions to philosophy of law and jurisprudence. Articles about aesthetic theory as articulated by women in the fine arts and performing arts are likewise desired. Although pedagogical material does not fit the framework of this journal, articles about educational theories developed by women, for example, the educational theories of Maria Montessori and Mary Everest Boole are within our scope.

You can learn more about the journal here.