If you’ve been at least somewhat on Twitter for a while, the past couple of days may have made it worth it. The confusion is comic, the resignations dramatic, the uncertainty exciting, and on top of that some people are doing an excellent job creating hilarity out of the broken verification system (feel free to share your favorites in the comments).

Some folks are moving from Twitter to Mastodon, a similar kind of social media platform, though (for now) with less corporate interference (algorithms, ads) in what you see. Mastodon is somewhat decentralized, which means that when you sign up for it, you sign up for one of its servers (sort of like a neighborhood in Mastodon). Which server you pick doesn’t seem to matter in terms of who you can follow or interact with, but it does form part of your Mastodon address.

From what I can tell, many of the philosophers and other academics joining Mastodon appear to be doing so through the zirk.us server, and that’s what I just did. My address is [email protected], and you can find me here. 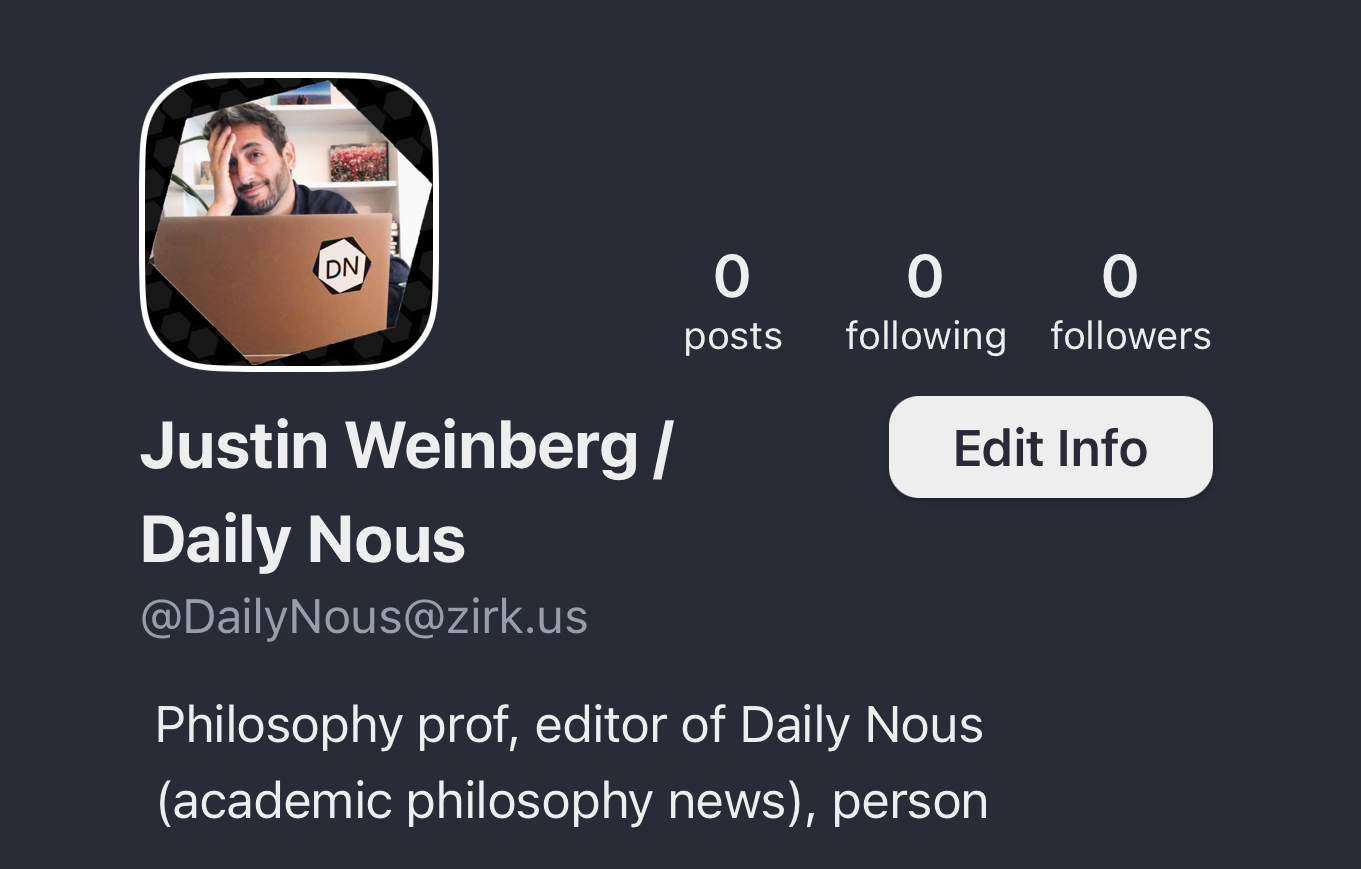 I’m sticking around on Twitter (here) for the time being, but I’ll also be trying out Mastodon.

Will Twitter disintegrate into uselessness? Will Mastodon take off? Who knows? According to Kelly Truelove, who keeps track of, among other things, data about philosophers on social media, 3% of philosophers with at least 1000 Twitter followers have added a Mastodon address to their Twitter bios (one way of letting their followers know how to find them on Mastodon). We’ll see if that number increases over the coming days.

Have a good weekend, philosofriends.

Hi philosophers, if you’re thinking of moving to Mastodon, but haven’t chosen an instance (a server where your account is hosted; you can interact with accounts on other servers no matter where you are, but it does change the @domain part of your handle), may I introduce you to: https://fediphilosophy.org/about
It’s a Mastodon instance dedicated to philosophers and other scholars whose work engage with philosophy. It’s owned and managed by me. Completely nonprofit (in fact, negative profit).
If you are new to Mastodon, you can read this guide that I wrote https://www.notion.so/Fediphilosophy-server-guide-and-rules-f698f52c7262482a8810f6da42cdbb9f#4f60d05a7e06447ca8fe743cf51b1844
Otherwise, please consider joining the party!
Note that this is a real-identity server.
Here are some other features:
– character limit on posts is 10k, which is ~2500 words. you can write your APA submission here!
– Right now it’s a little barren, but you can follow other folks on other Mastodon instances too
– There’s no ad. Your timeline is entirely posts by whoever you follow, in reverse chronological order.Report

Quick update: it seems that sometimes my Notion page is flagged as dangerous. I migrated the server guide onto this github page https://github.com/xiyudu/fediphilosophy (Xiyu Du is the co-owner and the developer of fediphilosophy.org)Report

I’ve had an account on the Mastodon instance scholar.social since 2017. Though I post sparingly, there are many things I like about Mastodon. Here are some things to keep in mind if you decide to try it.

Mastodon is a network made up of many independently owned and operated instances (servers). Most instances are maintained and moderated by volunteers and financed either by the instance’s owner or through crowdfunding. Generally speaking, users of one instance can interact with users of other instances. Nevertheless, what instance you join does affect what you see, for two reasons. First, different instances have different moderation policies. You cannot follow accounts on instances your instance’s moderators have “suspended.” Second, in addition to your home feed, which shows posts by people you follow, Mastodon gives you two other feeds, the local timeline (with all public posts on your instance) and the federated feed (with all public posts by people followed by people on your instance, except for people on instances your moderators have “silenced”). The federated timeline looks different on different instances. On large, general-interest instances, the public timelines are overwhelming. I recommend choosing an instance with at most 10,000 users and moderation policies you like.

Timelines are chronological. Giving a post a “favorite” tells the author you like the post, but it does not affect the number of people who will see the post. The way to increase a post’s visibility is to “boost” it, which is like retweeting or reblogging. Boosting a post expresses agreement or positive interest. There is no equivalent of the quote tweet (and thus no equivalent of the outraged quote tweet).

Mastodon has a content warning feature. If a post has a content warning, material “below the fold” does not appear unless the reader clicks “show more.” People on Mastodon use content warnings a lot. They are used for sensitive images, of course. They are also widely used for mentions of death or violence, posts about politics and current events (with headings such as “ukpol,” “US elections,” or “Ukraine”), high-conflict topics of all sorts, mentions of Twitter or Facebook, posts about food, selfies (especially selfies with eye contact), ASCII art, and spoilers. Sometimes people use a CW simply because a post is long. Sometimes people use a CW to hide the punchline of a joke.

Social norms on Mastodon, including the norms about content warnings, are contested. The influx of new users will doubtless cause some of the norms to be renegotiated. Keep in mind that many people who started using Mastodon before October 2022 joined because we wanted an environment that is not like other social media platforms.Report

I can’t see Mastodon really making it. This whole decentralized server aspect will worry many. The look and feel are from the nineties and few folks want to join a group with 474 users. That’s called a chat room. Hopefully, some deep pockets will come to properly challenge Twitter. In fact, I’m surprised no one yet has. The technology is all there to boot.Report

I don’t know if it will succeed or not but the whole “different servers” thing is misunderstood and way overblown: it’s just a way of spreading the costs and moderation duties out to volunteers in manageable chunks. Interoperability-wise it’s mostly just like having email addresses on @gmail.com vs @outlook.com etc – there’s no barrier for finding and communicating with people on other servers*. It just gives you an optional extra feed for your local server as well as your personal one generated by your follows (there’s also a “federated feed” that’s just a firehose from everywhere). So if you join a particular server based on your interests or location you can use it to encounter interesting new people and ideas, or you can mostly ignore it except for logging in purposes.

*Though there are some minor quirks and limitations at the moment, e.g. when using the web interface you can’t always see a full list of follows/followers on the accounts of other users (if they’re based on third party servers), but some of the mobile apps work around this transparently and limitations like this are gradually being resolved anyway I think.

If you’re looking for an informative and amusing guide to what has been happening at Twitter over the past two weeks, this is good.Report