Five boxes of previously unknown transcriptions of lectures by G.W.F. Hegel have been found. 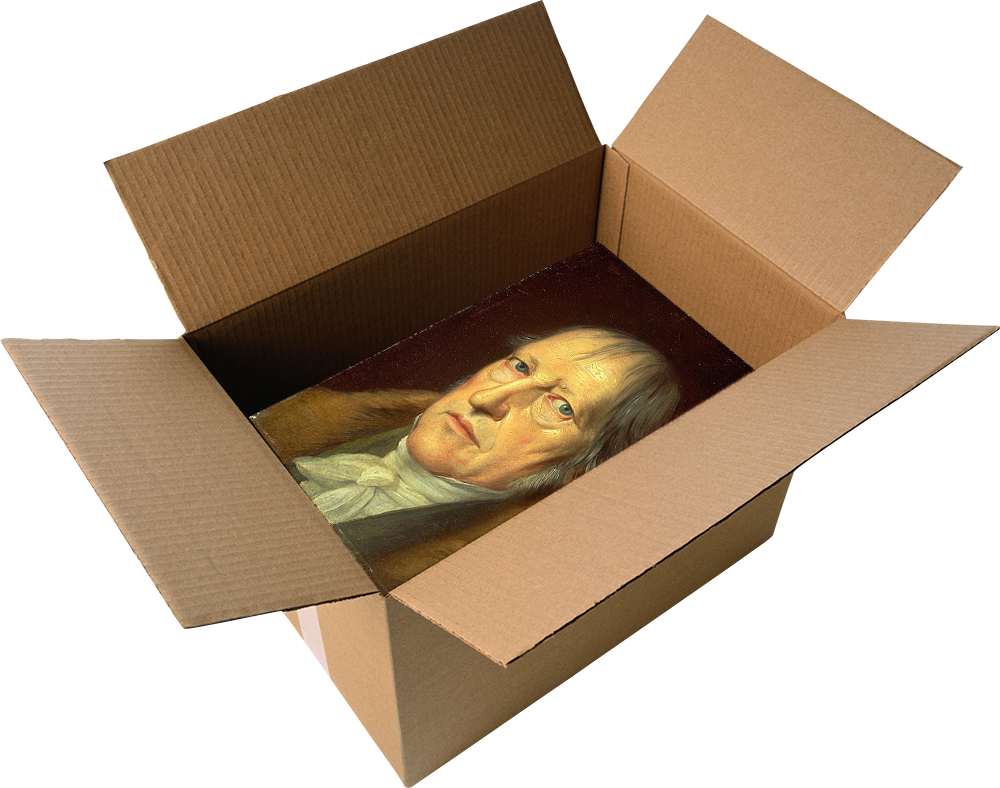 The materials were discovered by Klaus Vieweg (Jena) in the archives of the Archdiocese of Munich and Freising. The lectures, transcribed by Friedrich Wilhelm Carové, were delivered between 1816 and 1818 when Hegel was a professor at Heidelberg. Among them is an apparently complete lecture on aesthetics, as well as lectures on other topics.

According to Frankfurter Allgemeine Zeitung (the following is a Google-translation):

The philosopher Klaus Vieweg from Jena found five boxes with numerous transcripts of lectures given by Georg Wilhelm Hegel in Heidelberg in the archives of the Archdiocese of Munich and Freising. Hegel taught at the university there in his first professorship from 1816 to 1818. The hitherto completely unknown transcripts are from the hand of Friedrich Wilhelm Carové.  Born in Coblenza in 1789, Carové first studied law and worked in the Prussian customs service before beginning his philosophy studies in Heidelberg in 1816. In 1818 he followed Hegel to Berlin.  Carové was one of the few Catholics to take part in the student Wartburg festival and belonged to the foreigner-friendly and non-anti-Semitic part of the German fraternity, a commitment that later cost him the opportunity to become a professor.  In 1852 he died as a publicist in Heidelberg.  His manuscripts, which have now been found, cover almost all parts of Hegel’s encyclopedic system, from the Logic through several transcripts of natural philosophy, the philosophy of subjective and objective mind to the history of philosophy.  The archbishopric’s boxes contained, among other things, a long-sought and probably complete lecture on aesthetics by Hegel from Heidelberg.  The manuscripts are now to be published as an annotated edition by an international team of experts at the University of Bamberg, with the participation of the philosopher Christian Illies.

UPDATE (11/27/2022): Via Godehard Brüntrup, a “preliminary translation” of an article that recently appeared in Süddeutsche Zeitung:

A century-old treasure has come to light in the diocesan library of the Archbishopric of Munich and Freising: Transcripts of lectures by the philosopher Georg Wilhelm Friedrich Hegel (1770-1831), which had not been evaluated before, have turned up, according to the press office of the archdiocese. The documents open up new approaches to the thinking of the man who is considered the most important representative of German idealism.

Hegel biographer Klaus Vieweg of the Friedrich Schiller University of Jena came across five archive boxes with closely described folders and papers in the library, according to the statement. These had not been examined closely by researchers for nearly 200 years. The scientist was enthusiastic: “Such a highly surprising and fortunate discovery probably only happens once in a lifetime and is comparable to finding a new Mozart score.”

Various parts of Hegel’s philosophy were mostly documented only by lecture notes, they said. They allowed insights into his philosophizing as a “work in progress.” The transcripts, which run to some 4,000 pages, were penned by Friedrich Wilhelm Carove (1789-1852), one of Hegel’s first students at Heidelberg University. The Catholic writer, publicist and politician was one of the leading intellectuals of his time. The manuscripts are reportedly part of the estate of the theologian Friedrich Windischmann (1811-1861), a cathedral chaplain and vicar general of the archdiocese of Munich and Freising from 1846 to 1856. He was the son of Karl Joseph Hieronymus Windischmann, a professor of
philosophy and medicine in Bonn who was in contact with Hegel and received the transcripts as a gift from Carove.

The manuscripts comprise almost all parts of Hegel’s encyclopedic architectonics, including a long-sought transcript of a lecture on aesthetics in Heidelberg, about which no other records exist. They are to be prepared for a comprehensive edition under the title “Caroves Hegel-Mitschriften” as part of a scholarly project lasting several years; accompanying studies are also planned.

Hey! Can you supply me with a link to the FAZ-Aritkel? 🙂Report

The link to  Frankfurter Allgemeine Zeitung doesn’t contain the original article where this is published. Could you please provide the link to the article itself? I can’t seem to find the article through Google searches and nor through the magazine website.Report

I, too, could not access the online article. Rather, what was shared with me was a screenshot of it. Here it is.Report 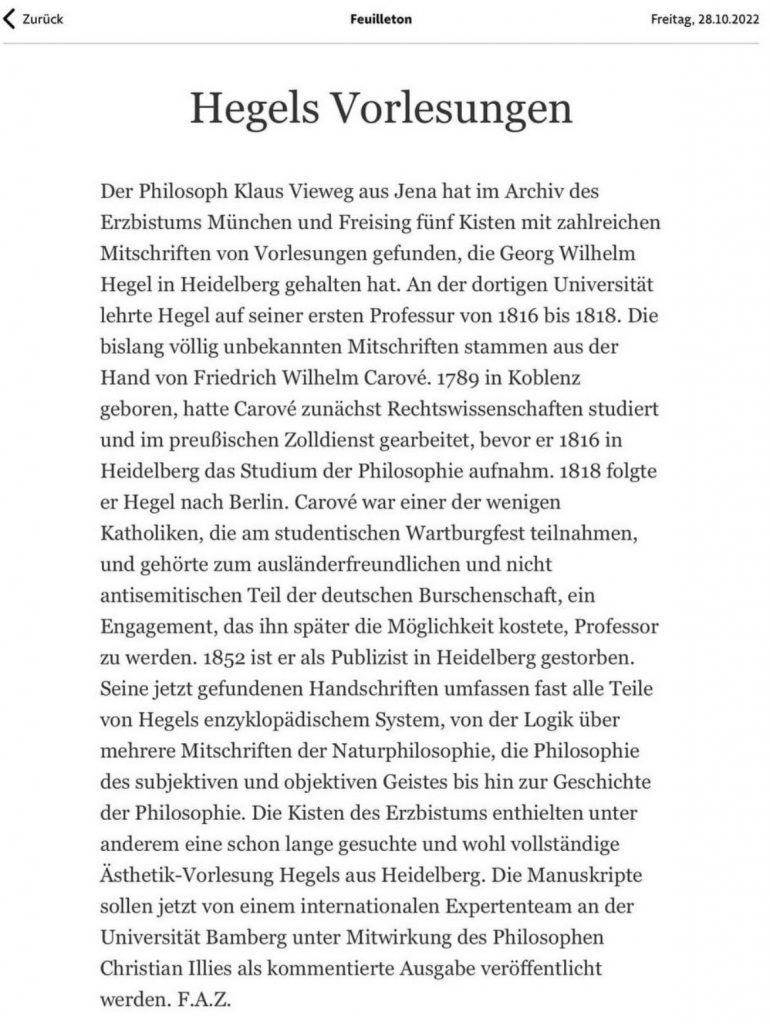 Already got it. Cheers, though. Great!Report

So somebody who knew shorthand did a live transcription of a Hegel lecture?Report

Yooo! I am so hyped.