A large selection of W. V. O. Quine’s correspondence—4495 pages of communication between Quine and 153 other philosophers—has been made online available at the Virtual Archive of Logical Empiricism (VALEP), a digital humanities initiative based at the Institute Vienna Circle (IVC) which provides an open-source database of digitized materials from and on the history of logical empiricism.

The collection is the result of a collaboration between Christian Damböck (Vienna), who founded VALEP, and Sander Verhaegh (Tilburg), who scanned the documents when doing research for his book Working from Within: The Nature and Development of Quine’s Naturalism (2018). 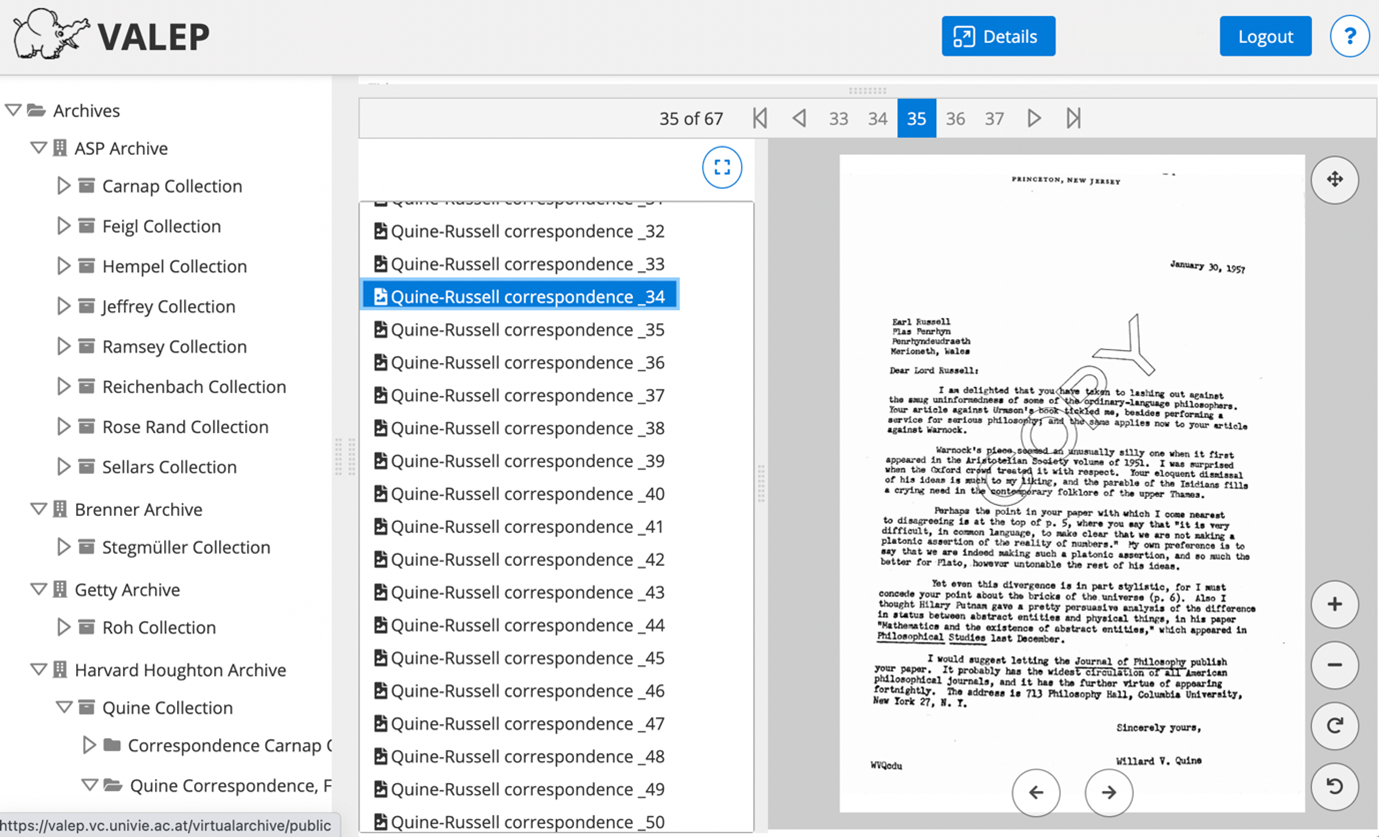 Screenshot of the VALEP interface

They provide some details about it:

The database contains a large number of letters that illuminate Quine’s philosophy and development, including almost 150 pages of correspondence between Quine and Donald Davidson; one of the only surviving letters from March 1933, when the young Harvard logician spent a month in Prague to visit Carnap; and a voluminous correspondence on set theory and (modal) logic with Alonzo Church. 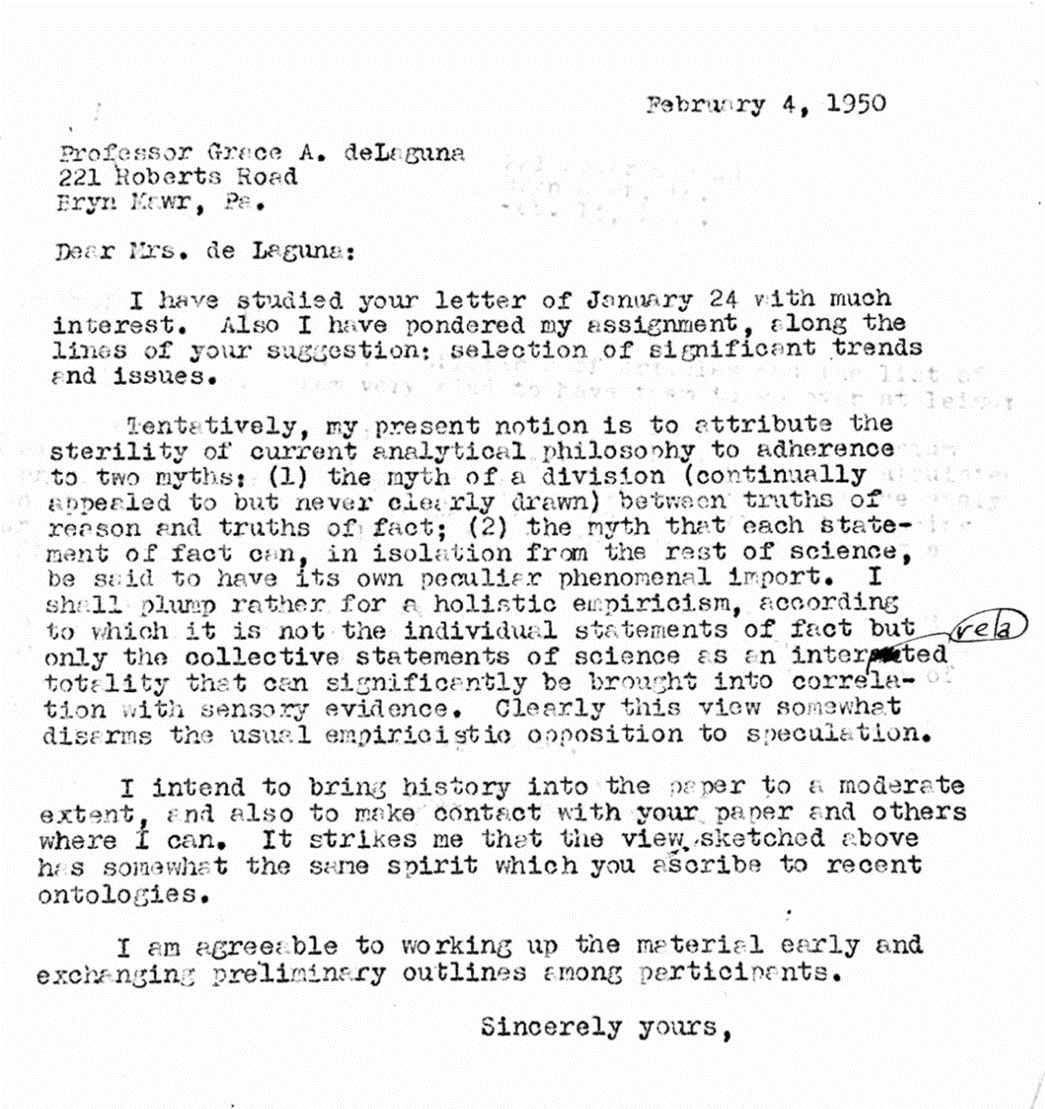 Quine sketches his plans for a talk on trends in recent philosophy (later published as “Two Dogmas of Empiricism”) in a letter to Grace de Laguna.

As I noted in an earlier post about VALEP, its interface takes a little getting used to, and it can take a few moments for results to appear. There are some tips for first-time users here. There is also a video, which is findable by clicking on the arrow next to “Filter”, selecting “Video,” and waiting for links to the videos to appear in the window below.

If you have questions about VALEP and its materials, get in touch with either Professor Damböck or Professor Verhaegh.

I was startled that among the list of names of philosophers included that Nelson Goodman was not listed. I assume that this is because those who made up that list didn’t consider Goodman an interesting philosopher to list, for surely Quine did correspond with Goodman.Report

There is an entire folder on the Goodman Quine correspondence. The list in the post is partial.Report

I’m speculating a bit here, but from the standpoint of appealing to the widest possible number of people, it’s probably a good idea that VALEP decided not to limit this to Quine’s correspondence with philosophers.

Of the names listed in the OP that I recognize (and I don’t recognize every single name), Chomsky, Conant, Skinner, Jakobson, and Herbert Simon were not philosophers (Conant and Skinner were definitely not, though the other three perhaps someone could quibble about if they wanted to).Report

P.s. Kuhn wasn’t either, though maybe he’s labeled a philosopher of science?Report

Are Quine’s letters as good as (that is as fun to read and as rich in philosophical content) those of David Lewis? (I reckon a graduate reading class featuring one or two of DKL’s letters per session would be a very valuable. Students could pick a letter investigate the intellectual context, and give a presentation explaining David’s arguments and concluding comments of their own. They would learn a lot.) If Quine’s letters are as good as Lewis’s , something along the lines of the two-volume Letters of David Lewis (though perhaps featuring talk-back from Quine’s corespondents) would be a worthwhile publication. I am pretty sure that I would buy it.Report

For what it’s worth (and for those reading this thread who are unaware), the Quine-Carnap correspondence is already published, edited by Richard Creath as Dear Carnap, Dear Van, published in 1990 with University of California Press. I cannot say it is as fun as it is rich in philosophical content, but it is rich in philosophical content, including in addition to the correspondence Quine’s lectures on Carnap at Harvard in 1934 and an unpublished reply by Carnap to Quine’s “Two Dogmas.”Report

Whenever I click a file, an error comes up which says:
“Could not load file
Sorry! You do not have access to this file”
I am unable to access any of Quine’s correspondences. I double click the files from the left hand side and it comes up in the pdf/image viewer, but can’t show me anything. Anyone know how to fix this?Report

I have the exact same problem.Report

I am having the same problem. This is a truly dreadful set up. It is so user-unfriendly. Have the creator of it never met a human being before?Report

You need a (free) account to access the material. You can request a login by sending an email to prof. DamböckReport

I’m assuming that the correspondence with Grace De Laguna concerned a special issue of Phil Review, of January 1951, which included a series of articles outlining the current state of things in Philosophy. There was a piece by Frankena, for example, about Moral Philosophy at MidCentury, as well as De Laguna’s on Main Trends in Speculative Philosophy. Quine’s contribution was “Two Dogmas” but perhaps it was intended as a summary of main trends in Analytic Philosophy. De Laguna might have been concerned about the potential for overlap between her contribution and Quine’s.Report