Donald Marquis, professor emeritus of philosophy at the University of Kansas, has died. 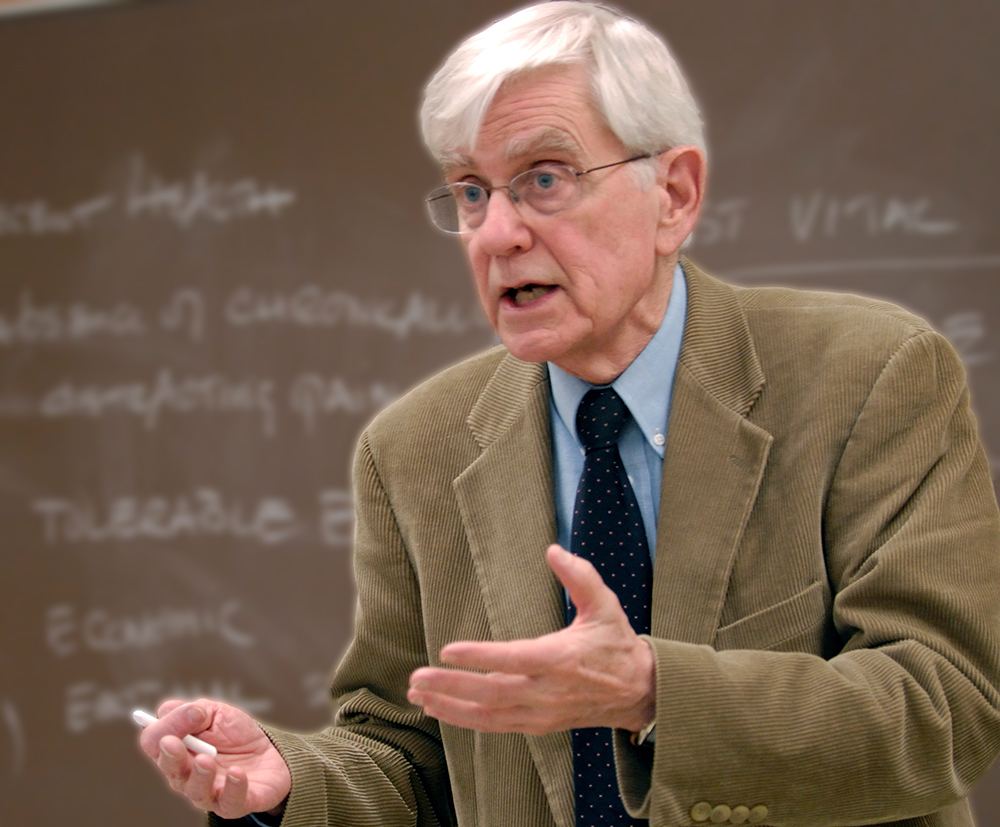 Professor Marquis was known for his work in biomedical ethics, especially for his article, “Why Abortion is Immoral,” which originally appeared in the Journal of Philosophy in 1989, and has since been widely anthologized. He also wrote about ethical issues concerning clinical trials, the morality of physician-assisted suicide, and philosophical questions about death, among other topics. You can view some of his works here.

Marquis joined the faculty at the University of Kansas in 1967 as an acting assistant professor of philosophy, as he was finishing his PhD from Indiana University. Prior to that, he earned an MA in history and philosophy of science from Indiana and an MA in history from the University of Pittsburgh. His undergraduate degree, at Indiana, was in anatomy and physiology. He was recognized multiple times over the course of his career for his excellence in teaching, and from 2007-2008 he was at Princeton University’s Center for Human Values as the Laurance S. Rockefeller Visiting Professor for Distinguished Teaching.

I’m very sorry to hear this. I’ve known Don for many years, and always enjoyed his company. One of my first publications in graduate school was a response to his famous abortion paper. When I first met him, a couple of years later, at a local conference (the Southwest Philosophical Association) when I was in my first job (at SMU in Dallas), I was very nervous, but he was gracious and friendly. I saw him many times at conferences, and when I visited Kansas or he visited Boulder. He had excellent taste in Scotch (which I consider to be one of the more important virtues). Although I disagree with his position on abortion, I always enjoy teaching that article. It is a model of clarity, and pretty much the only anti abortion paper worth taking seriously, at least for those of us unmoved by religious considerations (as was Don).Report

Alastair–save for the scotch (never had the opportunity) my experience with Don mirrors yours. He and I were at the ROME conference on multiple occasions, and he asked good questions in response to my talks, and sought me out during down time. He was curious about Kant, and asked probing but respectful questions during our conversations. And I too, despite disagreeing with his conclusion, very much enjoy teaching his article on abortion. That it is written so clearly really helps the students both appreciate Don’s reasoning, as well as the criticisms that I give in response.Report

Very sorry to hear this – Don was one of my undergraduate professors at KU: a charismatic, clear, dedicated and engaged teacher. He was one of the first of a wave of academic philosophers to work in bioethics – his original dissertation was on the scientific realism debate, I believe. But in the late 60s pressure was felt by many to move into more “applied” ethics – including of course bioethics. Don was in large part responsible for saving me from the Davidsonian philosophy of language that was popular at the time. He was independent minded, holding less common combinations of views (e.g, atheist, but anti-abortion, in favour of universal health care, opposed to the higher brain definition of death, etc.) I will miss arguing with him.Report

I didn’t know him personally but did have one telling email exchange with him. I was teaching his paper on abortion, and my students raised an interesting objection and we wondered how he might respond. I took a risk and sent him an email asking, and he replied. This gave us something interesting to discuss at the next class meeting.

I was excited that he was willing to respond to a query like this from an unknown like myself, and it seemed to demonstrate the desire for clear and productive discussion about controversial issues. Like his paper, the exchange was a great demonstration of how we can do better at such things even when discussing things we disagree strongly about.Report

Curious to know what the objection/reply was (since I’ve often taught the article myself).Report

It wasn’t anything Earth-shattering but it was a good way for my students to practice their argument skills and to engage with an author they were reading.

Students just wondered how he could say that the prima facie (I suppose he might have meant pro tanto) wrongness of killing was not overridden in the case of killing abortion doctors (as they thought he should want to say) while also allowing that the prima facie wrongness of abortion was overridden when continuing the pregnancy put a pregnant woman’s life at stake (as he suggests as a possibility in his paper). They thought he faced a dilemma: he either has to say his principle (suitably specified) implies abortion is NOT all-things-considered permissible even when a pregnant woman’s life is at stake, or he has to say that killing abortion doctors is (at least sometimes) all-things-considered permissible. I talked them through some of the options for ways he could reply, and we were just curious which one he’d take (because they didn’t find any convincing and thought this pointed to a problem with his principle).

If I recall, he demurred and reiterated that he wasn’t trying to specify precisely when the prima facie wrongness of depriving someone of a future of value was overridden, noting that people who were religious (unlike himself) might want to use something like the Doctrine of Double-Effect to try to do so.Report

I had first met Don in the early 80’s at a SWPS meeting. We remained good friends in all the years since. I will miss him greatly.Report

I will miss Don. When I was a student at Kansas, Don was the only one of the professors to play on the philosophy department softball team. He was great fun, and he always came out for a beer with us after the games. Great guy.Report

A really nice guy and fun to talk philosophy with.Report