It might be useful to hear more from those at “blended” departments about the advantages and disadvantages of that kind of arrangement. Blended departments may be more common than you think, and restructurings inspired by budgetary needs or the career ambitions of ascending administrators may make them even more so.

A new report from the American Philosophical Association (APA) provides details on the proportions of independent and blended philosophy departments at different types of institutions, and in different parts of the United States. 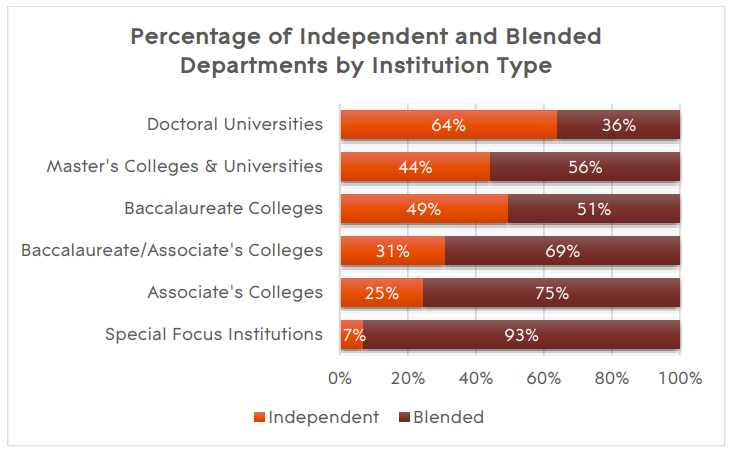 Breaking down the data on doctoral universities by Carnegie Classification, the report says: 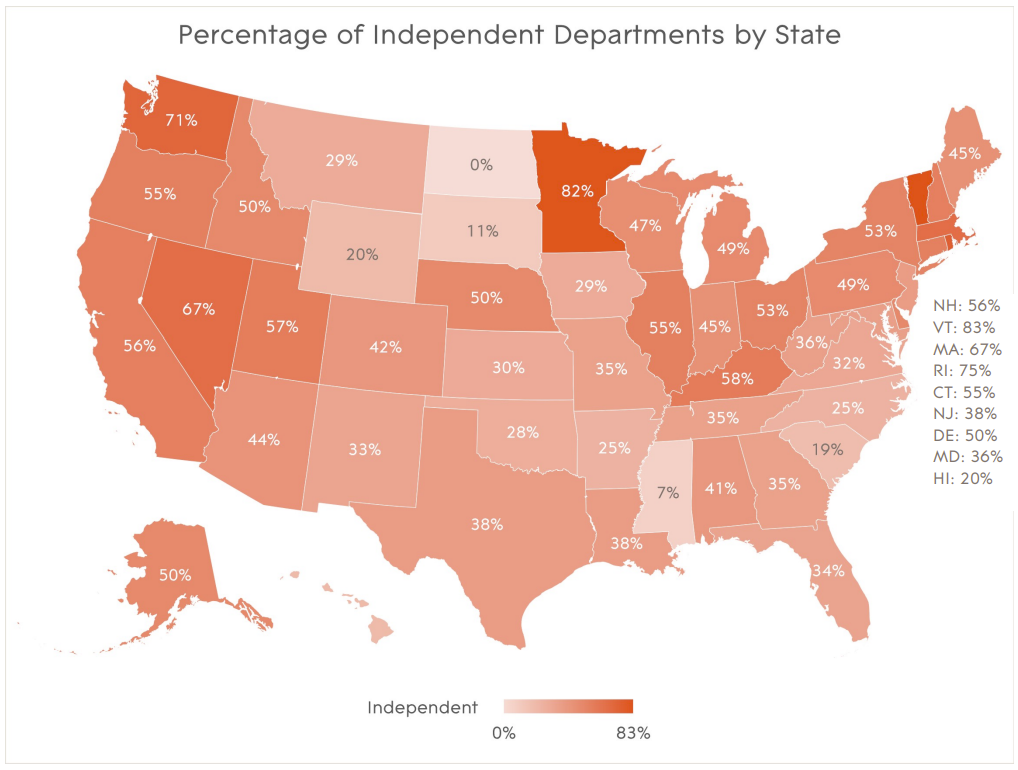 Geographic distribution of blended and independent philosophy departments in the U.S., from “Report on the Prevalence of Independent Philosophy Departments” by Jaehyun Hong.

One thing I wondered while reading the report is how my own department was counted. In practice, it is a completely independent philosophy department. But the name of the department on paper is “Philosophy and Humanities” (and its official abbreviation is PHUM). I believe that this name is being changed now as part of the major reorganization of the university (the Colleges of Sciences, Geosciences, and Liberal Arts are being merged into a single College of Arts and Sciences, among other things).

If I’m in a department whose name reflects a time when the structure was slightly different than it is now, I wonder if there are a significant number of other institutions where this is the case, and also whether transitions from a blended department to an independent one or vice versa are more common.Report

Interesting stuff. I think the the map contains an error, though. It puts Alabama at 7% independent departments, but the data from the report shows 9 independent depts out of 22 total (41%).

Working in Alabama made me suspicious that the percentage would be that low.Report

You might want to practice your geography. That state labelled 7% on the map is Mississippi.Report

Ha! So it is. A good lesson on the dangers of dashing off quick comment.Report

I fall under a similar but not identical category: I teach logic and philosophy at a K-12 school. Other teachers fill in a single lower grade critical thinking course, but I teach all the middle-high school classes, so in a sense I am the Philosophy Department. I also teach Latin, so I’m the one full time member of the Foreign Language Department 🙂 You can think of my job as analogous to, say, a 7/7 load at a community college with zero research expectations.

The big advantage is that there’s no barrier of entry to talking to teachers from other disciplines. I carpool with the math and religion teachers, often have lunch with the chemistry and English teachers, etc.

We have a very particular approach to teaching, so there’s a strong sense of a united teaching front and conversations about pedagogy are common. We’re all teaching the same students, so if so-and-so is disengaged, I can chat with their math teacher on the way home and problem solve.

Also, at the middle-high school level, our school tends to hire people who are at an MA or higher in their field and give on the job pedagogy training. (Some are also current or former professors.) So, although to my knowledge I’m the only one engaged in active research, there’s a sense of collegiality that reminds me of a college department. We’re all passionate about what we teach and make an effort to learn more, and we all respect each other in their fields. I frequently talk philosophy with the religion teacher, and learn math from the math teacher. This has certainly enriched my intellectual life in general and, I think, has also made me a better philosophical writer and researcher. It’s greatly enriched my classes.Report

I have remarked on this before. Don’t recall reading about it elsewhere until this post. The distinction(s) between philosophy and religion are superficial when we consider that both are emanations of human thought, desire, hope, and yes, belief. Blending of philosophy and or /or history, therefore, seems to have some logic about it. I don’t have the same level of comfort with some other blending we now see. But, that is not Mr call.Report

An Australasian perspective: almost all departments of philosophy are standalone here. But they are not standalone in a crucial sense, because almost all have their budget controlled at a higher level, in between the department and the Faculty: the ‘School’. Here at Adelaide the Department of Philosophy is one of 5 in the School of Humanities; at Monash the Philosophy Department is based in the School of Philosophical, Historical and International Studies; the Philosophy program at VUW is part of the School of History, Philosophy, Political Science and International Relations; etc. This obviously has some disadvantages in terms of the autonomy of the department.

But the advantages are real, especially for small departments. (And sadly, most departments in Australasia are now very small.) The administrative load is much smaller without a budget to arrange, and many committees are also typically run at school level. So HoD is not such a burdensome task, and admin generally is easier for a small department to resource. Annual variation in enrolment is directly tied to budgets here; in a small department, these annual swings would cause havoc in budgeting which are smoothed out across the bigger school (so while philosophy might be having a bad year, many of those enrolments lost might only have leaked to other humanities disciplines). When administrators are looking to cut, as they always seem to be, being part of a school that is in the black can help a department which is temporarily in the red. And there are genuine benefits, especially on the pedagogical side of the job, from being able to exchange ideas with colleague in other disciplines, which is facilitated by having committees, etc., at the school level.Report

Just to belatedly follow up on Ant’s point about schools, I’ve often wondered how widespread this “schoolization” phenomenon has become. In Australia, many of our universities have amalgamated departments into larger entities known as “schools”. The schools are often divisions within faculties, so that, for example, Philosophy at Melbourne is now a discipline within the School of Historical and Philosophical Studies, which is one of five schools in the Arts Faculty. My sense is that not all New Zealand universities have formed schools, though clearly the example of VUW is one in which a school has been formed. To what extent has this phenomenon occurred elsewhere, e.g., the UK, the US, Canada, other parts of the world, etc.? There was some resistance to this trend, but it does seem to have resulted in at least some instances in greater financial stability (as Antony indicates). I take it, by the way, that this is a separate issue from the original question, which related to departments in which philosophy is combined with some other discipline, such as religious studies. (Not clear where HPS fits into that, by the way.)Report