In the wake of controversies over Philosophia‘s publishing of articles on “Jewish Influence” (see here), its editor’s decisions regarding referees (see here), and its editorial processes (see here), the journal will soon have a new editor. [See update, below.] 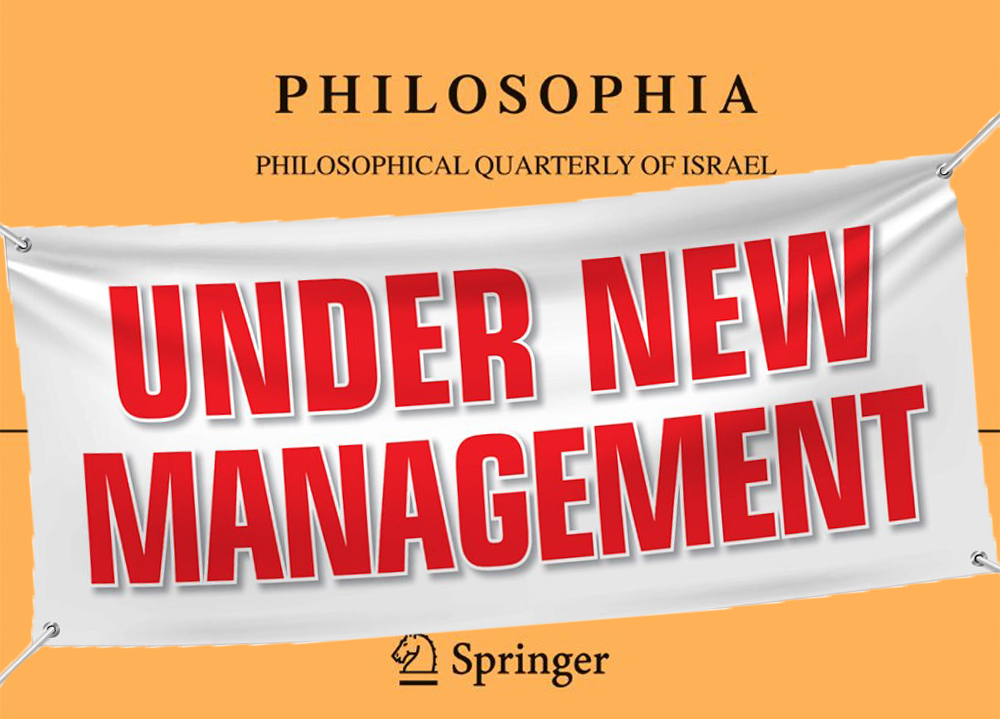 Mitchell Green, professor of philosophy at the University of Connecticut, will be taking over the journal as editor-in-chief, replacing Asa Kasher (Tel Aviv), who (according to his website) has run the journal for over 50 years.

The journal Philosophia, which has been published continuously since 1972, is pleased to announce a new Editorial Staff effective 1 September, 2022:
• Mitch Green (Connecticut), Editor-in-Chief;
• Emma Gordon (Glasgow), Associate Editor;
• Iris Vidmar Jovanović (Rijeka), Associate Editor;
• Jan Michel (Düsseldorf), Associate Editor;
• Linda Radzik (Texas A&M), Associate Editor;
• Kaley Rittichier (Connecticut), Managing Editor.
Longtime Editor Asa Kasher will remain as Co-Editor-in-Chief with Mitch Green until stepping down at the end of 2022, and Associate Editor Amir Horowitz will remain in that position until the end of 2022. It is expected that two more Associate Editors will be appointed in the coming months. Philosophia remains a general philosophy journal and welcomes broadly accessible submissions on all topics of current philosophical interest. Philosophia will continue to commission Author-Meets-Critics symposia, and starting in 2023 will commission state-of-the art essays accessible to a wide audience. Due to the growing number of high-quality submissions, the journal has moved from publishing four issues per year to five. For more information, please visit Philosophia’s homepage, or contact Mitch Green ([email protected]).

UPDATE (12/8/22): The phrase “in the wake of” means “after or because of.” I used that phrase in the opening sentence of the original version of this article because it was neither confirmed nor denied that the change of Philosophia‘s editorial team was owed to the controversies about the journal’s editorial actions that had been reported on previously. Today, Professor Kasher wrote to me to say that the change in editorship of the journal was part of a long term plan of his to retire as editor-in-chief after having run the journal for 50 years, and not in any way connected to the publication controversies at the journal over the past couple of years. He says:

Each and every claim or hint to the effect that Springer decide to replace me as Editor in Chief and that that replacement was made in connection with the above-mentioned controversies are blatant lies. Long ago, I decided to retire from my position as Editor in Chief of Philosophia when I would conclude 50 years of tenure. I also informed Springer that I would go on working on papers already submitted to the journal for publication but won’t process newly submitted papers, effective July 1, 2022. At the request of Springer and Prof. Green the date was postponed to August 1, 2022.
Professor Kasher also draws my attention to a “farewell editorial” he authored, “The Spirit of Philosophia: 50 Years in Retrospect,” which, among other things, contains some remarks on how the journal has changed over the years, particularly in regard to the kind of philosophy it will publish, as well as some “behind the scenes” descriptions of what’s involved in running a journal.

This looks great – glad to see the new and promising team in place — an appropriate move, and best wishes to the journal going forwardReport

Finally!! It was time the journal moved in a different direction – good luck to Prof Green and his new teamReport

Thank you for the kind words, Erin!Report

Linda mentioned to me the other day that she had taken on this role – I was a little concerned given everything I knew about Philosophia, but seeing that this is part of a major overhaul, I’m now a lot more optimistic. Putting out a big announcement like this is probably a good way to help prevent the journal from sliding back to the kinds of submissions and practices that it had developed a negative reputation for before!Report