The administration at St. Olaf College has ended, one year early, the appointment of philosophy and religion professor Edmund Santurri as director of the College’s Institute for Freedom & Community. 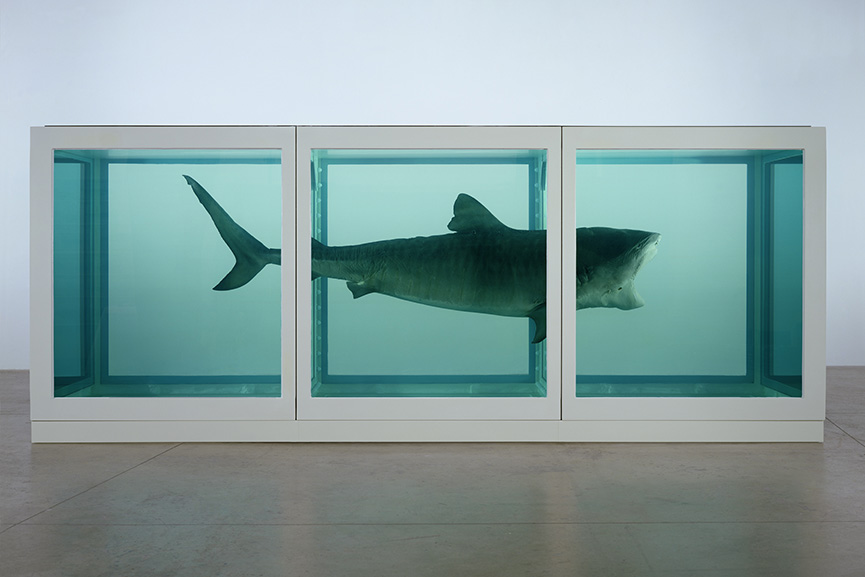 [Damien Hirst, “The Physical Impossibility of Death in the Mind of Someone Living”]

Professor Santurri’s directorship of the Institute was supposed to run through August of 2023. Why was his term ended now? One possibility is that the administration and faculty are unhappy with his choices of guest speakers for the Institute’s public lecture series, which is one of its main programs. Recent Institute events, such as talks by Peter Singer (Princeton) and others provoked objections from faculty and students at St. Olaf.

It seems quite apparent that the precipitating cause of this decision was the controversy on campus surrounding Professor Peter Singer’s public lecture at the Institute in the spring of 2022, though we understand that there has likewise been concern expressed about other speakers brought to campus by the Institute.

Professor Whittington notes that “no member of the faculty is entitled to hold such an administrative position,” however, “it is a grievous assault on the intellectual climate of the college for the director of a scholarly center to be precipitously dismissed from his post because the intellectual activities of the center offend members of the campus community.” He writes:

This sudden termination of Professor Santurri’s appointment as Director sends a clear message to the campus that some exploration of ideas will not be tolerated and that the college’s stated promise that the faculty will have the full freedom to pursue the truth in accord with their scholarly judgment is a hollow one. Professor Santurri has been professionally and materially damaged by this decision, and other members of the faculty have learned that there are intellectual boundaries that they dare not cross.

The letter concludes by calling for the College to “pay all stipends on top of his base salary as promised in his letter of appointment and to grant his request to be appointed by the chair of the St. Olaf College Board of Regents as a member of the Institute Advisory Board.”

upcoming change in leadership at St. Olaf College’s Institute for Freedom and Community is not the result of the current Institute director’s decision to host any single speaker. As the Academic Freedom Alliance’s letter notes, the Institute hosted its full, planned lineup of speakers this semester with the most recent event taking place on April 21. St. Olaf College fully supports the institute and its mission of exploring diverse ideas, encouraging free inquiry and promoting civil discourse through a wide range of programs and events. The college is searching for a new director who will support that mission and seek to build the institute’s profile, effectiveness and impact on our students.

You can view the 2021-22 program of speakers here and the previous year’s lineup here.

UPDATE (4/27/22): Joel Pust (in the comments) notes that the Foundation for Individual Rights in Education (FIRE) has also written to the St. Olaf administration. Details here.

UPDATE (4/27/22): Professor Santurri is interviewed about the situation on the “Banished” podcast. (via Joel Pust)

St. Olaf’s statement to IHE says the change in leadership is “not the result of the current Institute director’s decision to host any single speaker.” Though claims of differential causal relevance are difficult to spell out, this seems entirely consistent with the allegation in the AFA letter that the “precipitating cause” was the invitation to Singer. Put another way, the St. Olaf letter doesn’t deny that Santurri’s removal was the product of the invitation to Singer and one other (slightly objectionable) speaker.Report

More specific allegations in this letter from FIRE.

Why’s Singer so provocative to them?Report

Cheez – that line-up of speakers is most impressive. What possible objection could there be to them?