William E. Mann, emeritus professor of philosophy at the University of Vermont, died on March 8th, 2022. 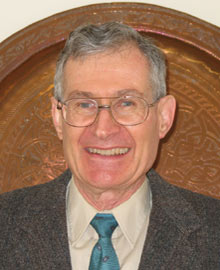 Professor Mann was known for his work on philosophy of religion, medieval philosophy, and Augustine. You can browse some of his writings here.

An obituary in the Burlington Free Press is here.

Bill was an excellent philosopher, a superb department chair, and a delightful human being. He created an environment in which we all felt that we were engaged in an exciting and cooperative enterprise. We read drafts of each others’ papers as soon as they were written, and we talked philosophy endlessly. And we had a great time doing it. Bill had a wonderful sense of humor which just added to the fun. Those of us who were fortunate enough to be his colleagues, and all who knew him, will sorely miss him and cherish his memory.Report

For nearly fifty years the Department of Philosophy at the University of Vermont has been regarded as one of the strongest undergraduate philosophy departments in the United States. During that time the one constant was the presence of Bill Mann. His rigorous scholarship, devoted teaching, steady administrative leadership, and unwavering personal integrity inspired generations of his colleagues. He was a model of professorial excellence, who was beloved by his family and admired by his many friends, myself included.Report

Bill Mann began his teaching career at Saint Olaf College in the Fall of 1967. A year later, in the Fall of 1968, I was a freshman at Saint Olaf. I was a very raw and unsophisticated student. I fancied myself to have an interest in philosophy, although I didn’t have a very clear idea of what philosophy was. In September 1968 I signed up for Introduction to Philosophy and it was my great good fortune to find myself in Bill Mann’s class.

I found the readings and topics for the class, Plato’s Euthyphro, Descartes’s Meditations, free will, and arguments for the existence of God, extremely exciting and engrossing. Within a few weeks, I was spending more time working on his class and reading philosophy than all of my other courses put together. Bill made it clear from the start at that philosophy was all about analyzing arguments and giving arguments of one’s own. He put formal versions of the arguments that we were discussing on the board and class time was devoted to analyzing them. His classroom was a place for disciplined thought. Some students found this dry, but serious students loved Bill’s classes and knew that he was giving them something rare and special.

When I began college, my writing skills were very deficient.  Bill was critical of my initial work for him, but he was also very generous with his time outside of class and helped me a great deal. I took two other classes with Bill my Freshman year – one on Plato’s ethics, the other a general introduction to ethics. At the end of my freshman year, Bill wrote a personal note on my last paper for him, a paper that I still possess. He said that he had enjoyed having me as a student and encouraged me to continue taking philosophy classes. He also gave a very favorable assessment of my philosophical talents. That note meant a great deal to me. I resolved that I would go on to graduate school and become a philosophy teacher. I have never wavered in the course I set then and I have been fortunate to fulfill that ambition. The trajectory of my life and career would have been very different were it not for Bill’s wonderful courses and his help and encouragement, which came at just the right time for me.

It didn’t work out for me to take any classes with Bill as a Sophomore or Junior, but, as a Junior and Senior, I helped run discussion sections for Bill’s course on Ancient Philosophy and attended his lectures. It was a marvelous class; the lectures were wonderfully clear and lucid. I noticed that he was developing his stage presence and using his wonderful sense of humor more and more in the classroom. He and I started playing tennis regularly during my sophomore year and developed a friendship outside of the classroom.

During the last semester of my Senior year, Bill taught a seminar on Mediaeval Philosophy. It was a special treat to take a class that centered on Bill’s area of special expertise and interest. We had a very good group of students and many fine discussions. It was a wonderful capstone to my college days which began and ended with Bill Mann.

Since then I have only seen Bill only intermittently at APA conferences, but I have always followed his career with great interest. I’m happy that he has spent almost all of that time in the wonderful Philosophy Department at the University of Vermont – a department that he helped to create and did more than anyone else to sustain.