Yitzhak Melamed, professor of philosophy at Johns Hopkins University, has been declared a “persona non grata” by a rabbi of the Portuguese Jewish Synagogue of Amsterdam, following a request to record footage at the synagogue for a project on Baruch Spinoza.

An Israel television network is making a film about Spinoza, who was excommunicated by this congregation in 1656. The producer of the film had planned to record Melamed in the synagogue and looking through its archives, and asked the synagogue’s officials for permission to do so.

Melamed, a leading Spinoza scholar, shared on Facebook the harsh letter he received from Rabbi Joseph Serfaty in response to this request.

In it, the rabbi notes that “Spinoza and his writings” were excommunicated “with the severest possible ban, a ban that remains in force for all time and cannot be rescinded.” Further, he cites Melamed’s scholarship on Spinoza as the reason he is unwelcome: “You have devoted your life to the study of Spinoza’s banned works and the development of his ideas.” He says the filming request “is incompatible with our centuries-old halachic, historic and ethical tradition and an unacceptable assault on our identity and heritage.” 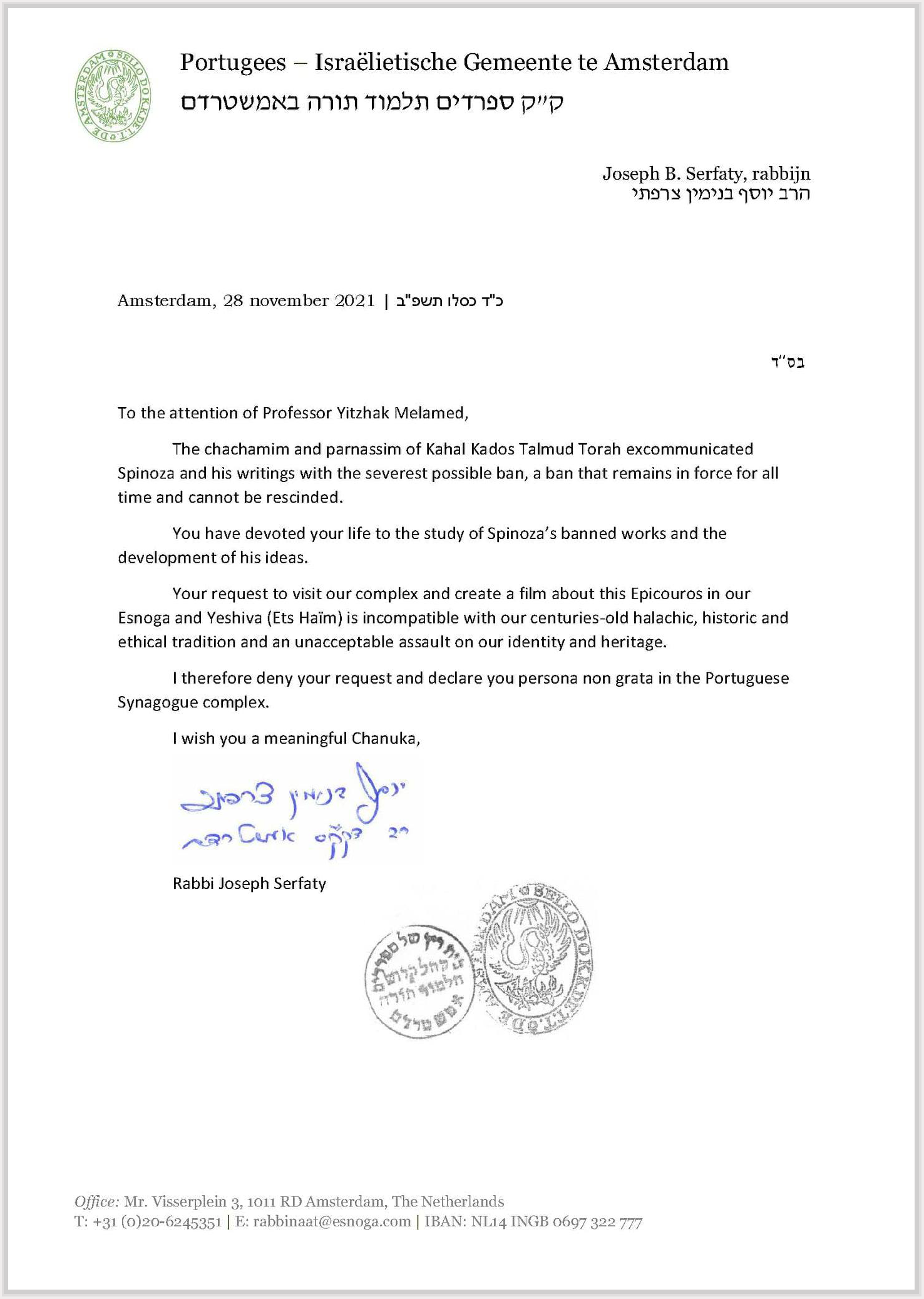 Melamed says he has responded to the rabbi, but the content of that response has not yet been made public.

UPDATE 1: Eric Schliesser (Amsterdam) defends the rabbi’s position (not his tone, though):

as I suggested in a different context… I am all for minority groups to have the right to decide on their often illiberal and sometimes immoral entry-requirements, not just membership, but also including their houses of worship (as long as Exit is relatively straightforward). The Portuguese Jewish Community of Amsterdam is very small, decimated by the Holocaust and emigration. It doesn’t just have every right to avoid facilitating a movie that however intelligent and sober still will aid in the glorification of its greatest Heretic, but in many ways it has a duty to do so.

UPDATE 2: The Times of Israel picks up the story.

UPDATE 3: The synagogue has written back to Professor Melamed, saying that Rabbi Serfaty did not have the authority to ban him, and expressing “regret that a perfectly normal request to visit the premises of the Portuguese Synagogue in order to work on a documentary for Kan Israel Broadcasting Corporation has led to an international uproar.” The say they hope Professor Melamed will visit and that the filming will take place. The full text of the letter is below. 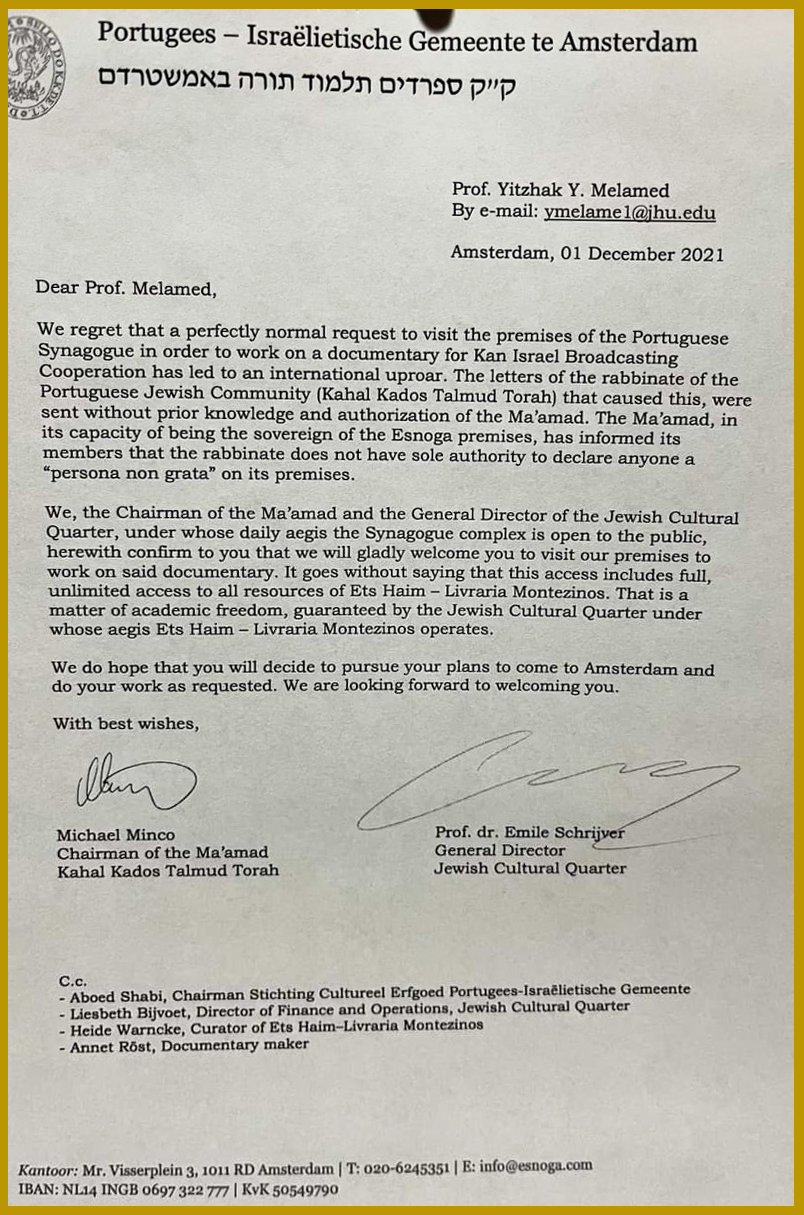 What a badge of honour for Prof. Melamed!Report

Spinoza and his followers are defenders of God and science in actuality.Report

Good for the synagogue. Spinoza,’s pantheism negated the martyrdom of 100K Jews during 1648-49 by disavowing Divine reward and punishment.let melamed use the grave site.Report

Agreed – anyone who is associated with or works on Spinoza should be treated this way – not just of course, Spinoza himself.Report

If your organization does that because of a centuries-old decision to forbid the reading of books that no members have read in living memory, then the organization is even more absurd. There is no heritage or ‘identity’ so special as to make such a move respectable.

It’s a pity that Professor Melamed will not be able to visit the complex. However, what he has received from the rabbi speaks volumes about what Spinoza was up against. Remarkable that the same show is still going on almost four hundred years later.Report

That is what the letter cites, but of course the letter is just making that stuff up. Itzik Melamed has devoted his life to Torah study, his children’s chinuch and their moral and emotional development, his parents, his wife, charity, and stuff like that.

He is also a leading expert in situating Spinoza and the European Haskalah generally in their historical and conceptual space, not because he is some sort of neo-Spinozist or maskil himself, but because the world benefits from that understanding and because Yiddishkeit can better understand itself by understanding how it was affected by and how in its traditional form it persevered through the Haskala.Report

Melamed’s life can be devoted to all of the things you mention and the study of Spinoza and the development of Spinoza’s ideas. So why think that the letter is insincere in the reason it cites?Report

“If your organization does that because of a centuries-old decision to forbid the reading of books that no members have read in living memory, then the organization is even more absurd. There is no heritage or ‘identity’ so special as to make such a move respectable.”

So in order to continue to forbid the texts that they themselves are forbidden from reading, they should read the forbidden texts?Report

The Gander
Reply to  Jen

“So in order to continue to forbid the texts that they themselves are forbidden from reading, they should read the forbidden texts?”

Jen
Reply to  The Gander

Would you prefer that the ridiculousness of the suggestion be overlooked? If so, you’re not like me: I prefer to root out nonsense.Report

The Gander
Reply to  Jen

Nothing in Justin Kalef’s original remarks implies an affirmative answer to your question. You’re not as smart as you seem to think you are, and your imperious behaviour on this blog is off-putting.Report

Last edited 5 months ago by The Gander
25
Reply

Jen
Reply to  The Gander

I neither said nor believed his comment implies it, but apparently you thought I did. Why? Do you not know the difference between implying and suggesting, or do you have trouble comprehending what you read? And do you too underestimate your opponents’ abilities while overestimating your own?

Perhaps now, with my guidance, you can finally understand why I asked the question I asked, in order to solicit information toward rooting out nonsense.

My behavior toward him is off-putting to him and the likes of you, but it’s certainly not imperious. Judging by your remarks here, the same would be true if I were to direct my behavior toward you.Report

(1)
This sentence: “Perhaps now, with my guidance, you can finally understand why I asked the question I asked.”

Is next to this sentence: “My behavior [is] certainly not imperious”

(2)
“Know Thyself” was inscribed on the Temple of Apollo at Delphi.Report

Two sentences and one question.

Isn’t the difference between these sentences useful for undermining the point you tried to make?Report

Perhaps the practice of the rabbis is inconsistent with liberal intellectual norms (which norms I endorse) but if I had to bet on who will be laughing in another 400 years, it will be the rabbis and not the liberals.Report

Isn’t the closing line “I wish you a meaningful Chanuka” a little off key,
coming immediately after declaring someone persona non grata?
Jus’ sayin’ …Report

Yeah. Honestly my main objection to this is how American passive aggression has been exported to Europe.Report

Since I get a lot of enjoyment from reading old texts, I’m not only upvoting this but emphasizing how American passive aggression was exported to ancient Rome and Medieval Europe and, most especially, Iceland in the 11th century.Report

The closing line “I wish you a meaningful Chanuka” is actually, in the context, unintentionally funny. (I laughed when I read it, at any rate.)Report

Can anyone explain the rabbi’s reference to Epicurus?Report

It’s not really a reference to Epicurus. It just means ‘heretic’ in the rabbinic literature.Report

Yes, although etymologically they’re related. Epicurus said that the gods have no interest in human affairs and that there is no afterlife. So apikoros is derived from “Epicurean,” but it just means “heretic.”Report

Thanks both; that is fascinating! I had no idea that ‘Epicurus’ was used as a general term for heretic in rabbinic literature. As the saying goes, you learn something every day 🙂Report

If you’re curious about this topic, check out Yaakov Malkin’s
book Epicurus and Apikorsim. The most important source for the term Hebrew term “epikores” is Mishna Sanhedrin 10:1.Report

Turns out there was a bit of a misunderstanding: the initial letter wasn’t sent by, or with the permission of, the folks who actually have authority over visitors. Melamed posted this new letter on FB today.Report 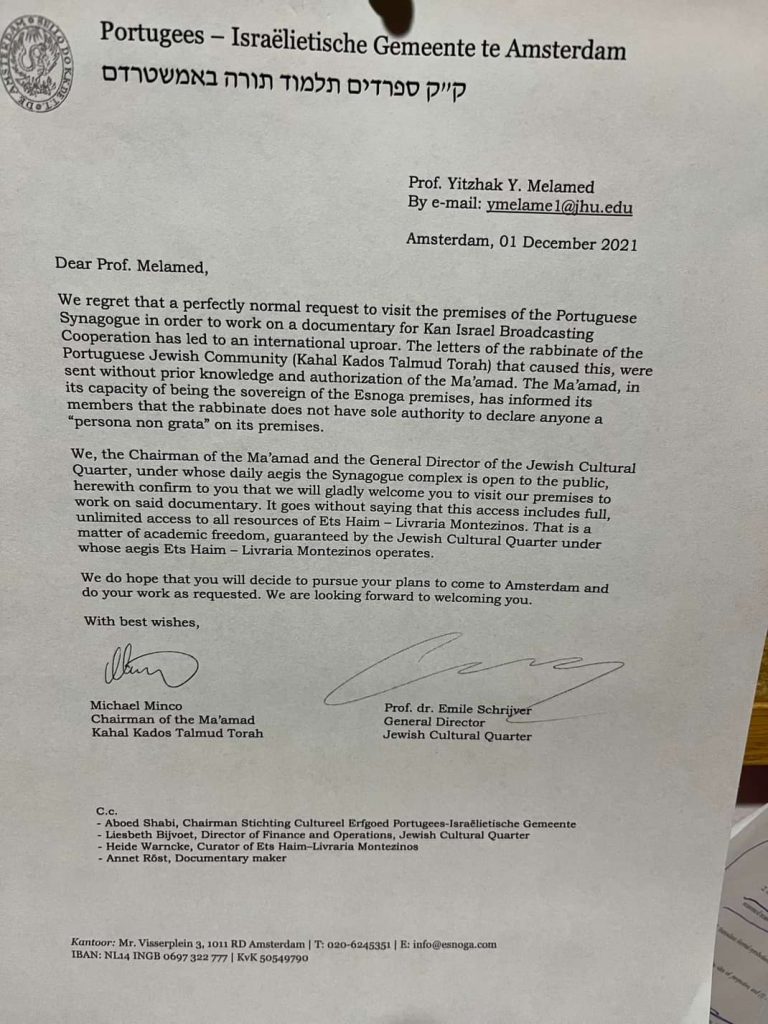 Not sure exactly what this comment is referring to, but I will say that, for my part, my comments were directed (a) at those with […]

I am very happy with this thread. It was a substantial discussion that remained relatively cordial in spite of the disagreements and the stakes. I […]

Hi Uli,   You say: “My results show that there is some small amount of valid variance in race IAT scores but this variance is highly correlated […]

Thanks for this, Lee. I had read elsewhere that nobody had ever succeeded in showing any significant correlation between IAT scores and discriminatory behavior in […]

Thanks, Chandra. I agree that your recent comments repeat what you already said in your original comment. What I've been asking all this time has […]

someonefromchina on New: Journal of Social and Political Philosophy

The comments to Peter Finocchiaro’s post are shocking. I was saddened to learn that we who have a Chinese background or/and want to pursue an