“I don’t think the computers will ever replace the people when it comes to interpreting philosophical texts. It’s rather that we humans can use computers to help keep ourselves honest and unearth patterns that would be difficult to detect if we did everything manually.”

How can those studying and intepreting figures in the history of philosophy avoid approaches that “warp or distort the philosopher being interpreted”?

Mark Alfano, associate professor of philosophy at Macquarie University, who studies Nietzsche, shares a technique, called “distant reading,” in response to a question from interviewer Richard Marshall at 3:16AM:

The basic idea is extremely flat-footed and simple-minded: I come up with a list of concepts or constructs that, based on my reading of Nietzsche over the years as well as my familiarity with the secondary literature, are probably important for him. Then I associate each concept or construct with the German words (actually word stems) that he uses to refer to or express it. For instance, the concept of  virtue  is associated with anything beginning with ‘tugend’. Some concepts are associated with only one word stem, others with multiple. This is made a bit difficult because Nietzsche updated his spelling in the mid-1880s. For instance, in his earlier work, he uses ‘instinct’ and ‘affect’, but later he uses ‘instinkt’ and ‘affekt’. In order to get all and only the word stems you want, you need to be aware of the text at a detailed level. Once I’m satisfied with the list of word stem(s) associated with a given concept, I then run an algorithm over the entire corpus to find out which passages contain which concepts. I initially did this all by hand via www.nietzschesource.org , which is an outstanding resource. It took months. But then I met a computer scientist by the name of Marc Cheong who figured out how to do it automatically in the course of about a minute. We eventually published a tool that anyone with minimal coding skills can use to replicate and extend what I did in the book.

The next step is really the one you asked about: how to use distant reading to complement close reading? There are two main uses. First, this kind of analysis makes it possible to answer questions of the form, “What does Nietzsche talk about when he talks about X?” So for instance, what else does he talk about when he talks about virtue, or about courage, or about contempt, or about conscience? In the book, I visualize these interrelationships with (what I think are) pretty pictures using Gephi. 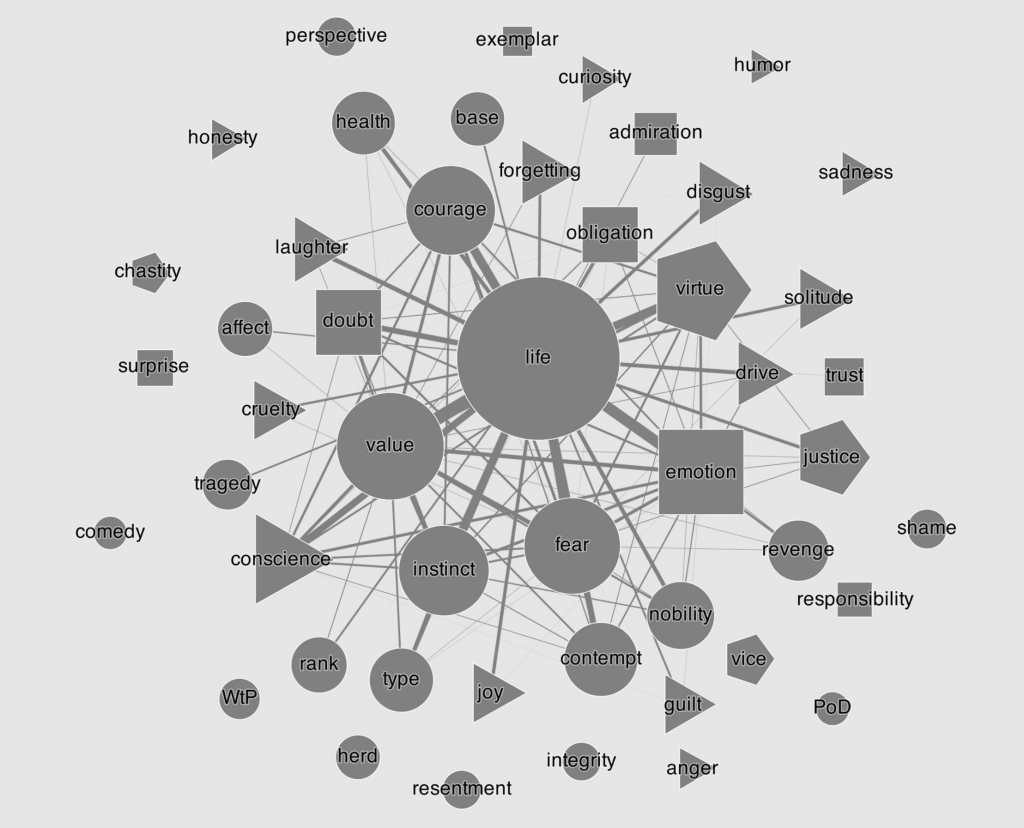 But the actual analysis is entirely structural and mathematical. Answering that question on its own doesn’t tell you how Nietzsche relates various concepts, but it strongly suggests that he does  relate them. This leads to the second thing, which is guided close-reading. The idea is that if Nietzsche keeps talking about X and Y in the same passage, he probably thinks they’re related in some way. So then I go through all of those passages with an eye specifically to the relationship between those concepts. This was a new way of reading for me. Previously, I’d either read cover-to-cover or would have a hunch and search for one or two relevant passages. Forcing myself to engage with all and only the passages in which concepts of interest crop up led me to formulate some new ideas, especially when it came to Nietzsche’s thoughts about perspectivism, about having a sense of humor, and especially about what he calls ‘solitude’.

I want to be clear that I don’t think the computers will ever replace the people when it comes to interpreting philosophical texts. It’s rather that we humans can use computers to help keep ourselves honest and unearth patterns that would be difficult to detect if we did everything manually. But we are the ones to offer the interpretations, and our interpretations will always need close, careful, and contextualized reading. That (along with the pretty pictures) is what I think distant reading is or at least should be about.

Related: A Semantic-Network Approach to the History of Philosophy

This practice has been known to classicists and ancient philosophers for decades due to the incredible Thesaurus Linguae Graecae, a searchable corpus of Greek literature from Homer to the Byzantine era.Report

Yes! Classics are way ahead of us.Report

That’s an excellent point. I did my BA in Latin and my PhD in medieval phil. The techniques I learned in my classics degree were invaluable for my dissertation research, when I was tracking a few concepts across a 2500 page Latin tome!Report

And even before an electronic TLG, individual authors of importance had complete words indices prepared for them. The same is the case for the Hebrew and Greek Bibles, where every single use of any given word is catalogued. It certainly helps to have digital search tools to replicate the same automatically for unindexed authors or to collate the use of terms in hundreds of other sources all at once, though.Report

This study by Brian Weatherson, involving computer automated classification of papers from a dozen journals over the course of the 20th century, was similarly interesting, in finding an exhaustive list of papers that used particular terms, rather than just the paradigmatic ones that come to mind from personal reading or citation: http://www-personal.umich.edu/~weath/lda/Report

Jeff on How Do You Teach Your Students To Read?

I mean a few different things. Sorry for the confusion. In a class where contemporary issues are discussed (say in an applied ethics course), I […]

Becky Vartabedian on How Do You Teach Your Students To Read?

I ask my students how they read, to identify strategies do they use, and to indicate any tricks or habits they have developed in their […]

Neil Levy on How Do You Teach Your Students To Read?

At least their professors keep up with the latest serious thinkers (Bertrand Russell). In other news, “Harald Karlsson” is having a lend if us.

Derek Bowman on How Do You Teach Your Students To Read?

For many of my classes, I give my students reading guides with guiding questions organized section-by-section or paragraph-by-paragraph. I modeled it off of the individual […]

Matt L on How Do You Teach Your Students To Read?

I try to teach them to read slowly, one sentence at a time, thinking about each one, and not going on to the next until […]

Sergio Tenenbaum on How Do You Teach Your Students To Read?

I did nearly all my reading in college while listening to music, and throughout graduate school (and till the last of the pre-pandemic days) I […]

Eric Steinhart on How Do You Teach Your Students To Read?

Ruth Sample on How Do You Teach Your Students To Read?

I usually have my students write a 250 word précis of the assigned reading, but this semester, I am assigning a more focused “reconstruction” of

Justin Kalef on How Do You Teach Your Students To Read?

Agreed, Harald. It may be possible for some of us experienced readers to read with loud music on. But we're talking here about students who have […]

Kenny Easwaran on How Do You Teach Your Students To Read?

I was definitely curious about this point. How did the study define "reading"? I consume most of my media on digital devices, and get most […]

Kenny Easwaran on How Do You Teach Your Students To Read?

Kids these days, with their boomboxes and Rolling Stones!