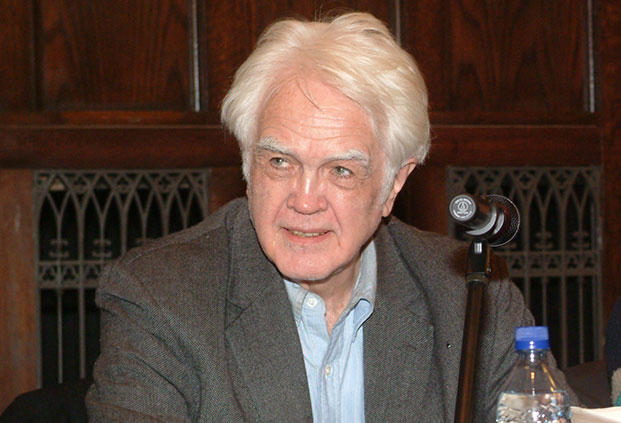 Professor Marsh joined the faculty of Fordham in 1985. In the fifteen years preceding that, he was a professor at Saint Louis University. He earned his Ph.D. from Northwestern University and his undergraduate and Master’s degrees from Gonzaga University.

His work was described as fusing “Marxist critical theory, phenomenology, process metaphysics and transcendental Thomism in critically constructive ways that counter the canon of modern secularism while issuing a sustained, sophisticated argument for social justice,” at a Fordham ceremony recognizing his achievements. His books include Post-Cartesian Meditations (1988), Critique, Action and Liberation (1994), Process, Praxis, and Transcendence (1999), and Unjust Legality: A Critique of Habermas’s Philosophy of Law (2001). You can learn more about his writing here.

Professor Marsh was known as a dedicated pacifist, and helped found the Peace and Justice Studies program at Fordham.

He died on June 20th owing to complications resulting from a series of strokes.

An obituary at the Fordham University website provides more information about his life and work.

Jim was my teacher and wrote me a letter of recommendation for graduate school. He was a wonderful teacher and he was intense and passionate about philosophy. You got the sense in his classroom that philosophy meant something, that doing philosophy was not a game, and that doing it right was a worthwhile and meaningful endeavor. I spent many hours in his office debating one or another fine point of something we went over in class, which now that I’m a professor myself I realize was an incredibly generous gift of his time. His passing is a sad event; he is a legend and a giant, and will be missed.Report

Marsh was a systematic, deep and radical thinker who walked the walk. Absolutely one of a kind who worked out his philosophical system in three volumes over decades-his updated version of Hegel’s takes on subjective, objective and absolute spirit under the heading of ‘dialectical phenomenology’. these, alongside interventions in debates in critical theory and the ‘modernism/postmodernism’ debate were most influential on me personally. One funny anecdote involved him being kicked off the Grannies for Peace protest line because the slogans he was trying to get people to chant were ‘too radical’ for them. Arrested many times for acts of civil disobedience against the crimes of empire, Marsh was an exemplar of a kind of politically committed philosopher. RIP to a great one.Report