While considering the state budget bill for 2021-22, the Arizona House of Representatives last month approved an amendment to it that would have required the state’s Board of Education to work with the University of Arizona’s Center for the Philosophy of Freedom and others to develop a civic education standards for high schools emphasizing “the blessings of liberty” and “portraits in patriotism.” 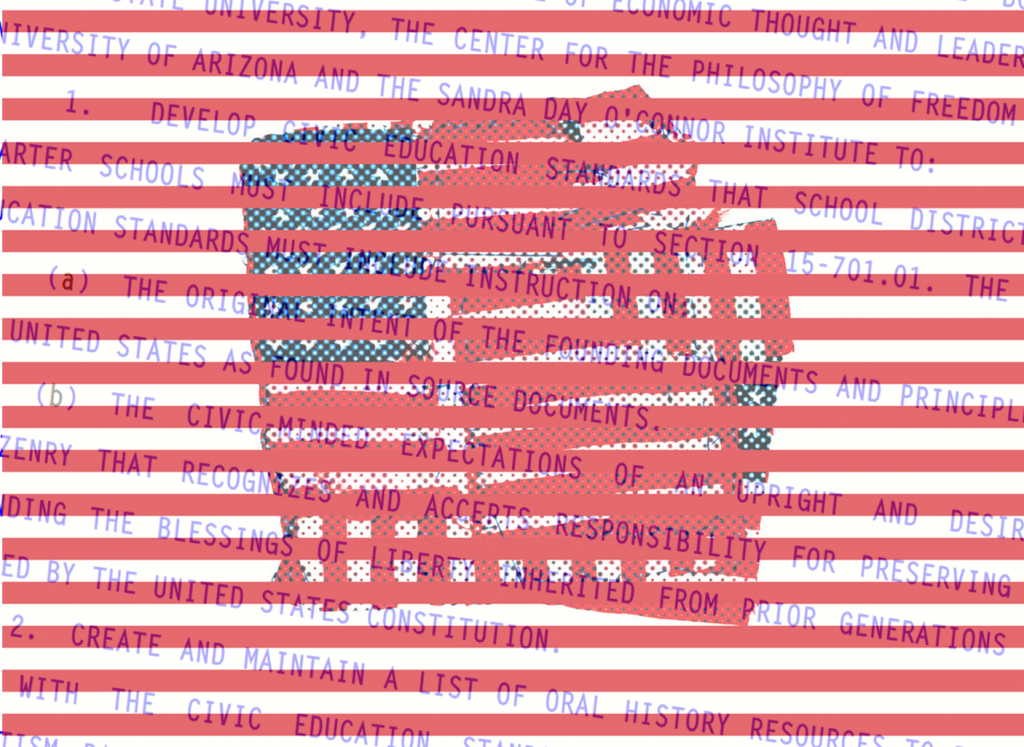 The amendment, from Representative Judy Burges, would have added an “American civics education” to the competency requirements for high school graduation that includes “a comparative discussion of political ideologies, such as communism and totalitarianism, that conflict with the principles of freedom and democracy essential to the founding principles of the United States” (section 15-791.01). The amendment elaborates on this requirement and how it would be developed:

To help families, civic institutions, local communities, school district governing boards and charter schools prepare students to be civically responsible and knowledgeable adults, the State Board of Education shall work with the School of [Civic and] Economic Thought and Leadership at Arizona State University, the Center for the Philosophy of Freedom at the University of Arizona, and the Sandra Day O’Connor Institute to:

(a) the original intent of the founding documents and principles of the United States as found in source documents.

(b) the civic-minded expectations of an upright and desirable citizenry that recognizes and accepts responsibility for preserving and defending the blessings of liberty inherited from prior generations and secured by the United States Constitution.

You can read the entire amendment here. The current Arizona school standards in history and social sciences are here.

Though the amendment passed in Arizona’s House, it was removed during negotiations in the Senate and was not in the final budget bill recently signed by Arizona governor Doug Ducey. Included in the budget bill, though, was continued state support specifically for the Center for the Philosophy of Freedom—$1.5 million for the coming year (this funding itself has been a subject of controversy).

What to make of all this? On the one hand, having philosophers help develop a state’s K-12 curriculum might have been an interesting and highly visible example of a type of public philosophy. On the other, the proposed legislation appears to push for a rather constrained and propagandistic set of standards, and seems of a piece with other recent efforts by state legislatures around the country to limit critical discussion of the United States in schools.

When I asked David Schmidtz, director of the Center for the Philosophy of Freedom, about the Center’s inclusion in the amendment and what he or others had done to make that happen, he said he had not been consulted or informed about it and that he did not know how the Center would have complied with the proposal had it become law, but that the Center is pretty well-known locally.

[image: manipulation of the cover of “Standards” by Tortoise]

It’s one thing to mandate collaboration with experts (although I would have thought political science was more appropriate). But to mandate collaboration with a specific body which was founded for ideological reasons and with high-profile Koch money, for purposes which are nakedly partisan and propagandistic, and whose starting premise is obviously flawed and transparently bullshit?

I’d recommend mandating collaboration from ideologically-neutral, clearly unpartisan groups, such as all the overtly left-wing centers than none of you think are problematic.Report

This is a throw-away tu quoque response that completely ignores the serious concerns that this matter raises. Given that you are a loud libertarian and a member of the Center in question, you ought to be able to offer a better defence than nothing at all, if you want to contend that this proposal is indeed defensible.Report

I am not a member of the Center and I didn’t defend the proposal. I am just laughing at you and mocking your concern trolling about the Center being “founded ideological purposes with high-profile Koch money,” a statement which is dismissive and also false. (In fact, the Center got a small amount of Koch money long after it was founded.) The reality is that the Freedom Center people have continuously gotten harassed by intolerant, ideological partisans both inside and outside the university.Report

You’re laughing at and mocking me, not Mike.

I understand that our first names are similar, but they’re not that hard to distinguish.Report

Jason, fwiw, you are currently listed as “research faculty” on the Center’s website. I make no comment on the larger issues here, and just want to note this possible source of confusion.

Jason Brennan | Center for the Philosophy of Freedom (arizona.edu)Report

I think it’s a bad thing for *legislation* to require state agents to use a particular think tank or private interest in this way, especially to the exclusion of publicly-funded resources. It would be a net bad, for instance, for election law to require state officials to consult with Dominion Voting Systems about accessibility issues. Or for Congress to have to talk to Halliburton or Raytheon representatives before they can decide on matters of defence. I see nothing wrong with requiring them to consult experts (which might tr out to be DVS or Halliburton or whatever); it’s the narrow specification of that expertise in the text of the legislation that I think is problematic.

Embarrassing for the centers to be called out by name by these representatives, which strongly suggests they are viewed as being sympathetic, or potentially so, to the cause of introducing jingoistic horseshit into the curriculum.

Hopefully the legislators don’t come to the math department for a consultation on that Arizona “recount.”Report

Looks like there is some history here, which might explain why the legislature had specific centers in mind.