Joseph Margolis, professor of philosophy at Temple University, has died. 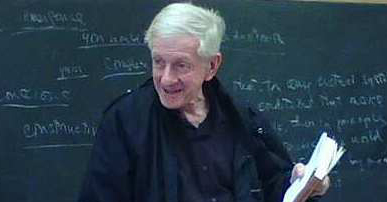 Professor Margolis worked across a range of areas in philosophy, including aesthetics, pragmatism, relativism, and various topics in applied ethics, writing over 30 books. You can learn more about his writings here, and read an interview with him here.

UPDATE: The Philadelphia Inquirer has published an obituary for Professor Margolis.

As you may know, the philosopher Joseph Margolis passed away on June 8th, 2021. Temple University is preparing a memorial event on Sept. 17th and in conjunction with this, I’m compiling a set of video comments from scholars and former students influenced by Margolis and his work. After some light editing to fit comments from as many people as possible, these video comments will be played at the Temple University memorial event on Sept. 17th.

Invitation: You are invited to produce a video of about 1-2 minutes in length in answer to the question, “What did you learn from Joseph Margolis?” I will then compile and lightly edit these videos into a roughly 15-25 minute presentation to play at Margolis’s memorial event. I welcome anecdotes but more importantly would like to hear reflections on the most important philosophical lessons (either most important overall or just for your own work) that you believe can be gleaned from Margolis’s work.

Where to send it:
My email address: [email protected]

Spread the word!:
If you know scholars influenced by Margolis, or former students of Margolis, please share this announcement with them.

UPDATE 3: Further details about the memorial for Joseph Margolis: 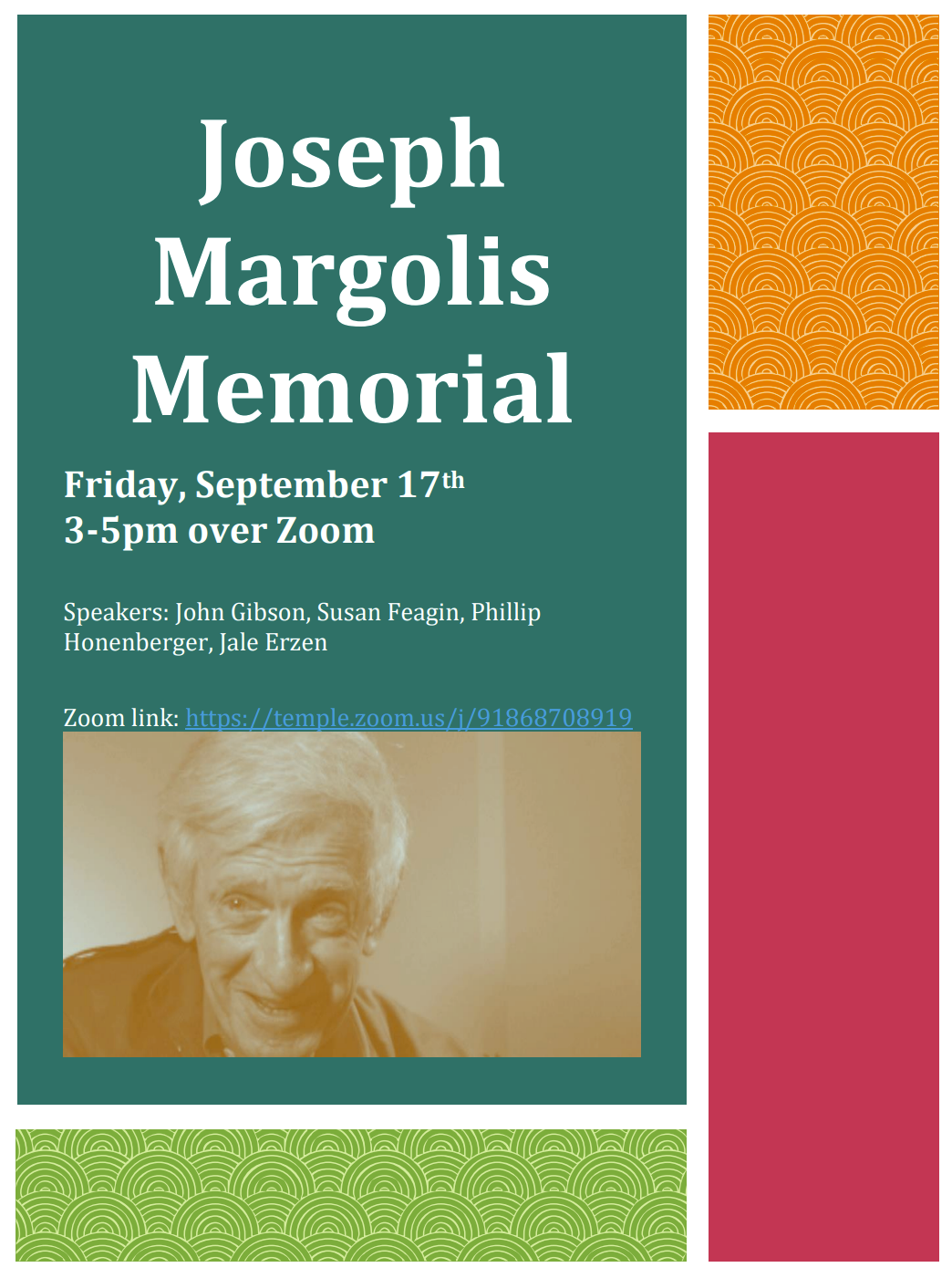 Margolis knew more about 20th century Western philosophy — analytic, continental, and American pragmatist — than anybody else. He crossed all lines, schools, and subject matters (aesthetics, ethics, logic, epistemology, metaphysics, etc.), and deeply, not superficially. Unique. He also gave his smile and his time freely to any idiot who asked (like me). End of an era. Good night, Joe.Report

Hi — quick correction — Joe Margolis was NOT emeritus — he was still teaching when he died. He was planning to retire at the end of next year. At 98. Extraordinary but true (verified by Temple University). Best, AiliReport

Hi Aili. Thanks. I’ve made the correction.Report

I was Joe’s colleague at Temple. I retired at age 62 and asked him when he would retire. He said “I would never give Temple that satisfaction.” Then that wonderful Margolis grin.Report

Joe exhibited physical and professional as well as intellectual courage. His wit was as sharp as his intelligence and his smile as affirming as his spirit. Though he could be appropriately critical Joe was large in spirit and nurturing toward those open to learning.Report

Architectonic – The pieces were precise, the scheme consistent and coherent and the views expansive. Margolis was a model of sweeping and organized thought – he spoke as he wrote, in beautifully organized sentences and paragraphs leading inexorably to broad, but nevertheless precise conclusions. Thank you, Joe Margolis, thank you for so much!Report

I find it to be both a pleasure and a privilege to have had classes and discussions with Dr. Margolis on numerous occasions. His approach to teaching philosophy, accompanied by his charm and vast knowledge of the field, propelled me to grow as a philosopher and as an individual. Even several years post-grad, I still vividly recall his lectures and the lessons that challenged and impacted my way of thinking and how I live out my life.

Dr. Margolis — you will be sorely missed, but the memory of you will undoubtedly live on in the hearts and minds of many, many people. Goodnight, Dr. Margolis, and may you rest in peace.Report

He was my philosophy professor for two years at Temple University, 07-08’, and I’m the one who uploaded that picture to Wikipedia. It was the most perfect moment when I took the photo with my flip phone, his hands extended outwards with a book in one, smiling as he did when making points and speaking in general. Scribblings behind him on the chalkboard. I immensely enjoyed every minute of his classes and his teaching style, he was so incredibly eloquent and as somebody else said in this comment board he spoke as he wrote, in long sweeping sentences that were beautiful and challenging but inexorably lead to deeply insightful conclusions. I went out of my way to always elect for his classes and had numerous moments of one on one interactions with him. I was essentially in awe of him and knew that I had to continue to listen to what he had to say and learn from him. I imagined he would live forever and be writing books into his 100’s. My father recently passed away suddenly and I just wanted to leave this comment to let anybody else out there reading this to see that I expressed my appreciation for this individual in a public forum so others can know how much he meant to me in my life, as my father meant so much to me. They both inspired me to be a lifelong learner and lover of philosophy and education, and I will always be grateful.Report

Joe was a paratrooper in WWII, and he took some pretty serious risks to carry out his missions. He remained one in philosophy. He would take his keen intellect and storehouse of knowledge of different Western traditions and parachute right into the heart of “enemy” territory, never worrying about what it might cost him in professional esteem to challenge reigning orthodoxes. He may have viewed himself as a neo-Protagorian, but he was certainly a descendent of Socrates on the courage front. He was indomitable.

A Joe story. Apel was giving a lecture at a conference which involved defending his transcendental approach to language. The blackboard was covered with details explaining his position. People asked questions. And then Joe took his turn. He asked his question. When Apel seemed a bit confused by it, Joe smiled and then said, let me ask it this way, why do you need any of this? (Not the exact words, but close enough.)

Joe’s courage was matched by his kindness, humor, and good-natured willingness to support junior colleagues. He fretted over the impoverishment of our intellectual and political cultures. His response? Keep writing and teaching for as long as possible. He managed to continue until he was almost a hundred. He will be so missed.Report

I was sad to learn last evening that Professor Joe Margolis died a few days ago. Like many here who have posted memories of him, I was privileged to be his student. I was a sophomore undergraduate major in Philosophy at Temple University when in 1968 Dr. Margolis joined what was then one of the outstanding departments in the country. I fondly recall his 1970 Honors seminar in the Philosophy of Language where the magnitude of his intellect was immediately apparent to everyone. In one session, he told us how foolish he felt when he was an undergraduate himself and had misused the word erstwhile in front of his professor. I have no idea why that story sticks in my mind to this day, but thanks to Professor Margolis I have spent the past 51 years making damn sure I knew the meaning of erstwhile and pretty much everything else that came out of my mouth.Report

A friend to all who engaged with possibilities of our shared reality, as Joe was a romantic and traveling Gypsy. He loved to have a good time at conferences, while being serious about philosophy as a way of life. I am truly sad he has gone on without us… I hope to find his spirit again. Good bye Joe, and God bless.Report

Joe had one of the most formidable minds that I’ve ever encountered and one of the biggest hearts. He was a dear friend, huge inspiration, and a model for the philosophical profession. I will miss him sorely .Report