Student evaluations of teaching have their problems and limitations, but if they allow for comments, at least there’s a chance that you’ll come across a helpful observation, a bit of appreciative praise, an amusing insult, or even potential advertising copy for your course. 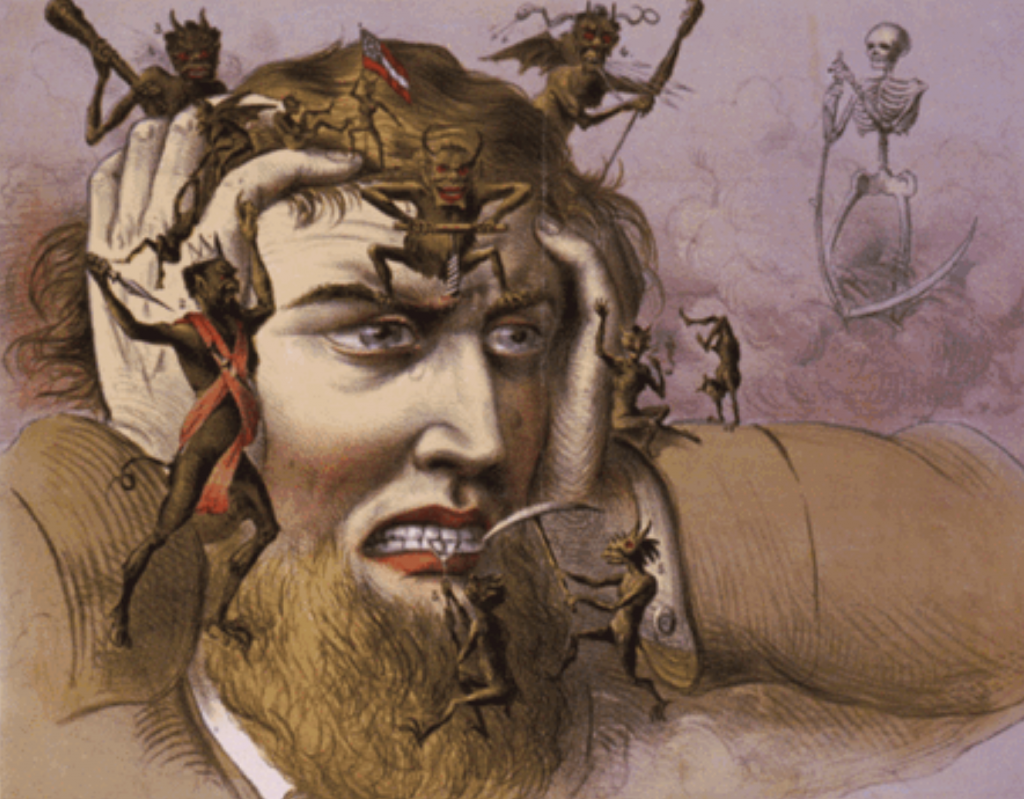 [from an ad for Wolcott’s Instant Pain Annihilator]

Take a moment to share a favorite student comment or two—positive or negative—from your courses from the past few years.

I have a hunch that there will be a surprising number of references to headaches in what philosophy professors take to be positive comments—a student recently described one of my courses as “brain throbbingly challenging,” which I count as a win—but maybe some other patterns will emerge.

“This course made my girlfriend dump me. I tried explaining to her that I was no longer sure she was a person, and it did not go over well. I learned a lot, but now I am alone.”Report

Terrible. I actually feel like I know less as a result of taking this course.Report

I’ve had pretty much that exact same comment. It made me feel proud.Report

I thought I signed up for a Philosophy course.Report

I came here for an argument!Report

“I love the style of the course. The way that Professor Crews teaches Ethics resembles exactly the way that Socrates teaches in the game Assassin’s Creed: Odyssey (I have no idea if that’s how Socrates was in real life). I would highly encourage anyone to take Professor Crews for philosophy.”Report

In this class, I learned that you can trust no one.Report

From way back in the days when we still used pen and ink to mark up student papers: “He has the handwriting of a five year old child.”Report

From a student who was paying either too much or not enough attention during the discussion of informal fallacies: “Professor begs the most interesting questions.” My first ever set of teaching evaluations also included the remark, clearly meant to be kindly, that “She will be a good teacher someday.”Report

“Would not recommend this course as the material can freak you out.”Report

Two different evaluations from the same Philosophy of Religion course:
1) “When I entered this class, I was a hardcore fundamentalist Christian. Now I doubt all that.”
2) “I came into this class a convinced atheist (having been convinced by Dawkins). Now I don’t know what to believe.”Report

Yeah, that’s exactly what Phil of Religion should do!Report

Two of my favorites (from the same Logic course a few years ago):

“Prof. sometimes wore white pants and/or white shirts while using very inky dark blue whiteboard markers. This made me nervous for him.”

“Professor can be an asshole but a really cool kind of asshole that makes you learn so much and have fun in class.”Report

The old get your friend to be the bad teacher trick worked on these evals for my Logic course, would recommend.Report

My favorite eval comment was the one that said my class was simultaneously the most terrifying and richly rewarding one the student had taken at uni (they were graduating that year.)Report

Elementary Logic has produced some great ones.

A few years ago:

“The infinitely chipper Michael Kremer, in the unholy hours of the morning gets to class 10 minutes early, adjusts his small cotton sweater-vest, and thinks about how to best present a material that is absolutely destitute of joy and happiness, in a fashion that’s somewhat palatable. Sometimes he is successful. More often than not, he fails. I dislike logic. I dislike the concept. I dislike the material. I dislike the authors. My entire attitude towards this course was a resounding “I WOULD PREFER NOT TO”. This has most certainly impacted my opinion of the course and the substance. Every day I would get to class early with a coffee and a book to mentally prepare me for what was about to come, and every day, without fail, I almost fell asleep as the Kremer began lecturing about some of the most boring material in the world. There was a student that always came to class 10 minutes late, sat next to me, and promptly proceeded to fall asleep, his head resting dangerously close to where I liked to prop my shoulder against the armrest. Did I blame him for sleeping? No. Could he have done it somewhere else? I really would have preferred it. Regardless, this is the atmosphere that permeated throughout Elementary Logic: exhaustion, reluctance, and my silent mental screams heard only by myself, begging whatever divine entity that was listening in on my thoughts at that particular time to end my suffering. Towards the end of class, when Kremer had decided he had sufficiently presented the material I would reflect at the circumstances of my suffering, and realize I was insignificant in relation to the cruel, indifference of the universe. That made me feel better about myself, and I usually ended up enjoying the last five minutes of class, as Kremer profusely apologized for having made some miscalculation when completing his 60 line proof. Honestly, Kremer did the best he could and I like him all the better because of it, but my distaste for logic has poisoned whatever motivation” (comment ends without a period)

And then Elementary Logic, over Zoom this year:

“The only solace I found in quarantine.”

You win some, you lose some, I guess.Report

That was absolutely wild and I loved every second of reading it.Report

The joys of Zoom: “Professor was the exact right amount of assertive about his views, but should show his cat to the camera more often.” (The student likely meant my views about my cat.)Report

“Get some new goddam shirts.” This provided the theme for years of Father’s Day gifts from my kids.Report

I know Professor Collins has Ten Year, but he should be fired anyway.Report

“Professor Garrett made this subject seem more interesting than it really is.”Report

Loving the player, hating the game…Report

I will forever cherish one that was a comment on both the TA and professor (who I won’t out but who was also amused!) for an introductory logic course I TA’d for in grad school, which was something like:

“Horrible teachers, math geniuses, and absolutely nonapplicable material make this class the worst I’ve ever taken. The class climaxed at the very last lecture in… learning how to add two plus two. Ground-breaking stuff here in (University X).”Report

“I literally hate philosophy and this turned out to be one of my favorite classes.”

That’s either high praise for my course or a really disparaging claim about every other course this student took. Report

I suspect I’m not interesting enough to garner really positive or really negative student evaluations. But I well remember one of the professors I TA’ed for in the mid-1980s. He had a framed student evaluation form on the wall of his office. (These were, of course, handwritten back in 20th century.) It said simply:

THIS CLASS MADE ME THINK. I HATE TO THINK.Report

I love my students, and they left such nice, thoughtful comments this year (e.g. “What I liked about the course was her book which was interesting…” 😍). But I find it amusing that I bring a critical eye to even these comments. I am guessing other philosophers are the same way; it is in our blood. This one, for example, I read as somewhat negative (“to the best of her ability”), even though I am pretty sure it was intended as fully positive: “I believe this instructor has done an amazing job to teach her students the course to the best of her ability, especially during a pandemic.10/10. Thank you.” It is silly that a student can say 10/10 and that I read 8/10. I sometimes with I could turn that off.Report

Every time I come to your course, I feel like you put an Alkaseltzer in my brain 🧠.Report

“I would have appreciated it if we covered the topic of Morality.”Report

An international law course (I teach both philosophy and IL):
“F*ck you, I’m a pirate.”
I think the student was interested in the Law of the Sea.Report

“Dasgupta has an unfair advantage over my other professors. He has an interesting accent and cares about his content.”Report

It was only recently that I’ve finally realized and admitted to myself that I hate (physically) being in class. This is nothing against [APC] by any means, but I credit this class with being the one to help me come to this revelation. I’ve always felt like my life was being drained away with every second sitting their [sic], just listening to someone talk at me for about an hour, always thinking about getting out. It sapped me of any energy, and for whatever reason, this class seemed to do that exceptionally well.Report

My all-time favorite evaluation simply stated, “She’s not as funny as she thinks she is.”Report

A student wrote only “get a belt” on the comments section of the eval. No other comments or boxes checked.Report

“started the semester awkward” on an otherwise blank page.Report

For Intro to Philosophy: “All we did was discuss and debate different topics!”Report

‘Instructor is a malignunt duarf’. I am (evidently) unsettlingly short in stature. Also I correct misspellings on papers.Report

From Rate My Professors, not a student evaluation. Combined Derek Jarman’s Blue and Satantango into one film. But I felt it really captured the essence of my Philosophy of Film class:

the guy is clearly crazy. he likes this movie that is just a blue screen and 17 hours long. apparently his ta’s have both watched it… seriously? he also makes u read emma and compare it to clueless which is a bad combination for any guy that doesn’t like chic flicks or jane austen (90% of dudes?)Report

A colleague reported that he received this same exact comment ten years apart: “This course is too hard for the average student to get an A in.”Report

From rate my professor:

“All of the assignments were created by him, so say goodbye to quizlet for this class.”Report

“Give the man whatever he wants. He knows his stuff”Report

After a Rousseau seminar: two different students. 1) “This course made me a Marxist” 2) “This coure made me appreciate fascism.”Report