In the following guest post*, Eric Schwitzgebel (UC Riverside) shares data he and other philosophers have collected on the percentages of philosophy students and degree holders in the U.S. who are black, in an attempt to understand the causes of the relative lack of black philosophers in the country.

A version of the post first appeared at Professor Schwitzgebel’s blog, The Splintered Mind. 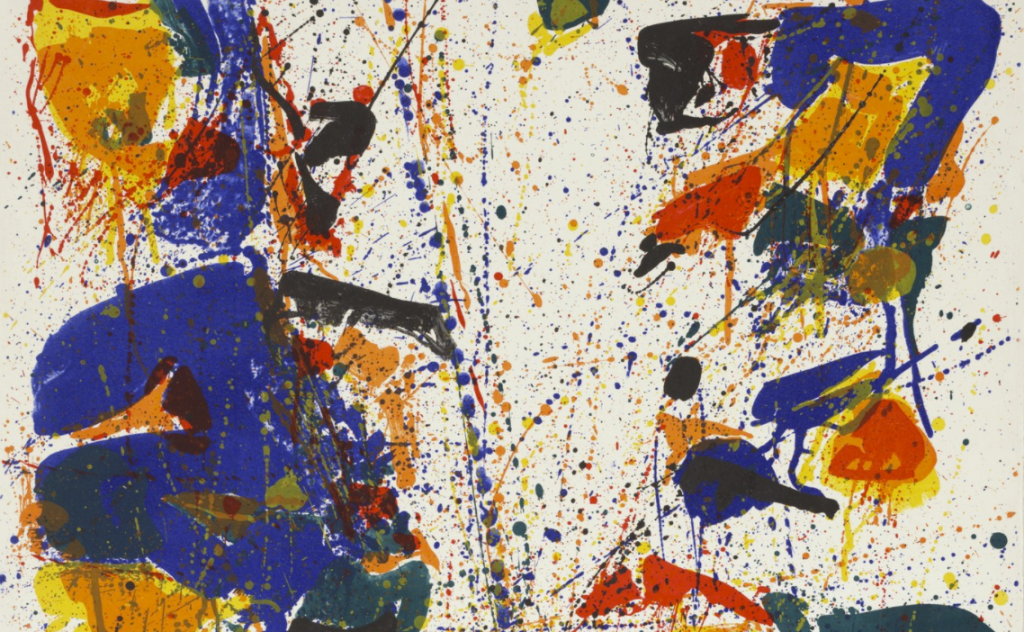 The Leaky Pipeline into Academic Philosophy for Black Students in the U.S.
by Eric Schwitzgebel

Liam Kofi Bright, Carolyn Dicey Jennings, Morgan Thompson, Eric Winsberg and I have a paper forthcoming in The Philosophers’ Magazine on the racial, ethnic, and gender diversity of philosophy students and professors, and how it has changed since the year 2000.  We look at data from first-year intention to major through entry into the professoriate, drawing on several large data sources. 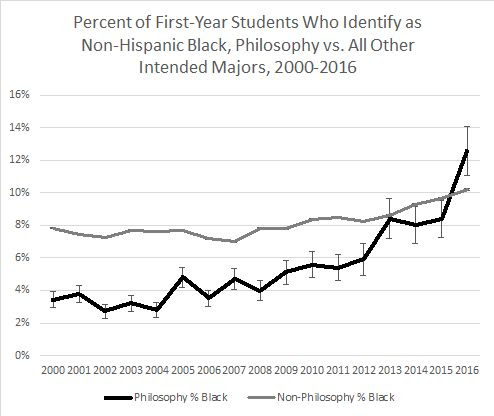 In this first figure (drawing on the HERI CRIP database), note the sharp increase in first-year intention to major from 2000 to 2016.  By the end of the period, first-year students intending to major in philosophy are about 10% non-Hispanic Black, similar to their overall representation in the undergraduate population. How about bachelor’s degrees awarded? 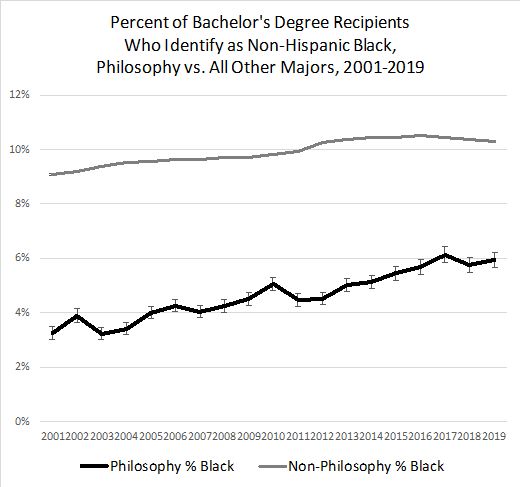 Here (drawing on the NCES IPEDS database), things are quite different.  It does appear that the percent of philosophy bachelor’s recipients identifying as non-Hispanic Black is rising — from about 4% in the early 2000s to about 6% more recently.  But it still remains far below the 10% non-Hispanic black among bachelor’s recipients overall.  This might partly reflect a lag in the data.  Students entering in 2015 or 2016 (the final two years of the first figure) wouldn’t normally be receiving their bachelor’s degrees by 2019 (the final year of the second figure).  Other possible explanations include a tendency for Black students disproportionately to exit (or not enter) philosophy, difference in the questionnaire items or methods, or sampling problems in the HERI database.

We see further falloff at the PhD level (drawing on the NSF SED database): 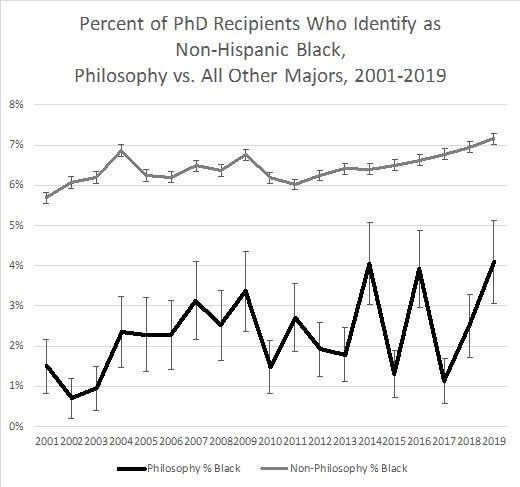 Non-Hispanic Black students are currently receiving only 1-4% of PhDs, with a weakly increasing trend at best.  Temporal offset might again play a partial role, but it can’t be the whole story.  Even if we take bachelor’s recipients from 2010 and 2011 as the approximate cohort to receive PhDs in 2018 and 2019, there’s a falloff from about 5% to about 3%.  It’s unlikely that sampling problems could explain the difference, since both datasets capture the large majority of degree recipients.

The most natural explanation is a “leaky pipeline”.  Philosophy is increasingly drawing Black students’ initial interest.  However, for whatever reason, as their education proceeds from first-year to bachelor’s to PhD, Black students are disproportionately likely to exit.

My theory: Competition from other careers, largely put forth by AA.

1) Philosophy is a difficult career in which to “succeed” in society, as the term is commonly defined. Although of course philosophy can be broadly useful, and a few shining stars make money writing… there are not many careers in which one can be “successful” other than as a tenured professor. Ergo, most “successful” philosophers are tenured professors.

2) Tenure-track professors are–as a rule–relatively smart, extremely literate, and extremely well-educated people. Philosophy candidates routinely come in fairly high on SAT, GRE, etc. It isn’t a field for middle-grounders, by and large, at least not if you want to reach the high end.

3) Even outside a top program it’s a lot of work to get a PhD and there’s a lot of competition to get a job.

5) Moreover, for those would-be (smart!) philosophers, it’s much *easier* to become a lawyer (like me) or an MBA, or virtually anything else. Often w/ less school commitment and a higher guarantee of postgrad success.

6) Being smart (see #2) the would-be black philosophers are largely aware of this, and largely go elsewhere. This is pretty rational: 5+ years and some extra work in the hopes of getting tenure, or 3 years of (comparatively easy) law school, and a BIGLAW job paying $150K/year, going up from there? You can’t blame them!Report