Following years of extraordinary mismanagement by administrators, Laurentian University is attempting to address its current financial insolvency by eliminating a shocking number of academic programs and tenured positions. The Department of Philosophy and several of its faculty are among those slated for elimination. 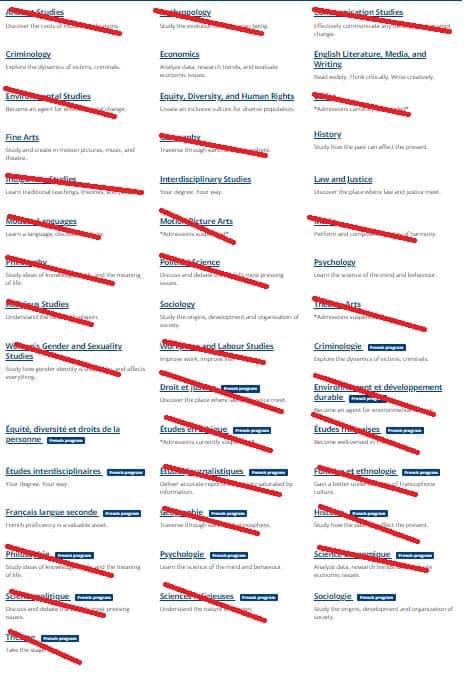 100 professors at Laurentian received termination notices today, and 58 undergraduate programs and 11 graduate programs will cease, the CBC reports. In addition to philosophy, programs in mathematics, physics, political science, anthropology, environmental science and studies, and many other fields were cut. The full list of canceled programs is here.

The Globe and Mail provides the background against which the cuts are taking place:

Laurentian declared insolvency in February just as it was on the verge of being unable to meet payroll. It has debts of nearly $100-million from a building spree that didn’t produce enrolment gains and it ran deficits in the range of $2-million to $5-million a year for several years, according to its court filings. It also spent millions in grants earmarked for research to keep the lights on, owing in part to the practice of having just one bank account where incoming funds from various sources were mixed. [emphasis added]

The university is effectively declaring bankruptcy, seeking protection from creditors as it restructures itself. The Globe and Mail reports:

It’s the first time a publicly funded university in Canada has used a court process normally reserved for private corporations, the Companies’ Creditors Arrangement Act, which gives the court wide latitude to achieve a settlement. The Laurentian Faculty Association, which represents about 380 professors at Laurentian and its federated universities [Sudbury, Huntington and Thorneloe Universities; see here], has criticized the use of this court process for a public institution. The provincial government has so far refused to heed calls to step in to help, despite protests in Sudbury…

The faculty terminations are effective April 30th. Philosophers Brett Buchanan and Gillian Crozier are among those who have publicly shared that they are among the faculty to be laid off.

UPDATE (4/15/21): “A group of students is working on raising funds for students affected at Laurentian University in both Undergraduate and Graduate programs to assist them during this difficult and unprecedented time.”

This is horrific, and will have a devastating impact (economic as well as social and educational) on the region.

Given the fiasco that was the university’s building projects these last few years, I’m not entirely surprised they’re 300mil in the hole, but… holy shit.

It’s worth observing that the university is relatively isolated and in a fairly remote region, and serves some significant underserved (francophone and Indigenous) populations there.

It’s also worth noting they’re trying to cut ties with their federated colleges, which means worse news is probably coming down the line. I also wonder about the future of NOSM (the medical school), which they run in partnership with Lakehead.

Finally, none of the coverage I’ve seen has anything to say about admin cutbacks.Report

The best reporting/analysis on what is happening at Laurentian is by Alex Usher. His blog post from today is excellent https://higheredstrategy.com/laurentian-blues-7-the-process/ (The 7th in an ongoing series.)Report

This is reasonably big news in Ontario (well, among a certain circle of folks, anyways). My heartfelt sympathies to those who find themselves without a job, but with kids, mortgages and life still marching onward.

I want to pick a bone with a quotation from the article, though:

““It feels like the rug has been pulled out from under you,” Prof. Verrelli said. “It’s not easy to get tenure, and when you do it’s such a relief. But today shows it doesn’t mean anything. They can just cut you, cut the program.”

This has the sound of ‘saying the quiet part out loud’.

Of course, that is /theory/ of tenure. We all know that the vast majority of us do research that 99% of people would not bat an eye at, which really just points to the fact that tenure is a class-driven perk for institutionalized intellectuals.

No wonder the line-worker at the factory servicing our Amazon orders rolls his eyes as he fights for paid bathroom breaks. Report

Tenure is indeed primarily an economic protection. Society has decided that education and research are public goods, and has established universities to pursue them. The professorial jobs at these universities require a very long period of study (during which one is not making any money): much longer than needed for an entry level white collar business job, longer than for a law degree or business job with MBA, similar to for an MD or other technical position. For universities to compete for qualified people against these other fields with their much higher pay, in lieu of the huge expense society would incur at a strategy of matching salaries, professorial jobs offer iron clad job security (private sector white collar pay is high in part because insecure jobs require workers to save extensively).

I’m not sure that quite makes the case, though.

A law degree takes on average 7 years (undergrad + grad), while getting a PhD shouldn’t take much longer than 9. But most lawyers getting law degrees do not make much more than a tenured professor at an Ontario university–Bay St tycoons aside.

We also have to take into consideration that any reputable PhD program is funded while the vast majority of lawyers assume substantial debt to earn their degrees (e.g., in Ontario law school tuition rates were deregulated years ago). So most entering the legal profession are likely carrying more debt than assistant professors are, leaving them with lower incomes in real dollars than what appears on paper.

I don’t think the point about competition goes through, either. I suspect that not many academics would compete for white collar, private sector jobs. Some would. But academic work is unique because for some academics, but not all, it is seen as a calling rather than just a job. This typically means that their incentive to work in the university is not primarily financial. Indeed, I think if tenure were eliminated competition for academic jobs would still be fierce–just looking at public teaching jobs in Ontario. And those who would leave academic if tenure were eliminated are likely not as committed teachers anyways.

Finally, the upper-/lower-rung observation is I suspect a false dilemma. Eliminating tenure would leave in tact many of the privileges that academics already enjoy–autonomy, dignified work conditions, good pay, a sense of self-efficacy and purpose in one’s work, and so on.Report

You make a variety of claims in the first three paragraphs: I’m not sure what you are driving at. Perhaps your thought is that tenure either isn’t effective at the purpose I claim it to have, or that there is no need for tenure to attain that purpose, or that tenure has undesirable side-effects to outweigh whatever contribution it may make to that purpose, or that the purpose is not one we should desire. None of that would be relevant to the claim that this *is* the purpose of tenure, in the sense that the tenure system was initially constructed in order to attain that purpose. This last is what I claim.
I don’t understand the relevance of your claim about the ‘false dilemma’. My contention is that inequalities among work conditions should be redressed by improving conditions lower down rather than by worsening conditions higher up. You contend that worsening conditions higher up could still leave inequality. Of course it could. So what?Report

Right, yeah. I think I see what you mean. I realize I’m making a few assumptions here, but I think I can stand by them.

One assumption is that we’ve talking about whether tenure is a justified protection, rather than a protection that some academic workers have regardless of whether they should have it.

I assumed this because in the original quotation I interpreted Prof. Verrelli to believe her termination wrongs her or deprives her of something she is owed–namely a job even when her university is in economic duress–and I think this implies that she believes she is rightly owed this protection.

I then interpreted your post, that tenure is in fact an economic (rather than only intellectual) protection, to be following the same thread, implying that this goes some way towards justifying it and perhaps Verrelli’s position too.

If I got you wrong here, then I do think we’re talking past each other a bit and there’s no real disagreement. My follow-up post is just off-target.

If I didn’t get you wrong, then I think this clarifies my follow-up (and, I think, your initial post too).

For if your argument is something like, ‘In fact, tenure is an economic protection, and that justifies it’, then you would be wrong I think in only two ways: either that’s not true, or it is true but it doesn’t justify tenure.

And I took the latter route, trying to argue that the reasons I understood you to be giving to justify tenure were either overstated (e.g., economic differences between academics and other professionals are in fact not so large) or false (e.g. that universities would be unable to compete for the best candidates if they did not offer tenure).

At risk now of going on, I can see now that I didn’t very clearly lay out the ‘false dilemma’ claim.

My thinking was this: if (as I thought I’d argued) it’s not obvious the economic protection story about tenure justifies, then eliminating it would not wrong anyone (e.g., deprive anyone of something they are owed), and the resources put towards sustaining this perk should be redirected. In other words, there is nothing zero-sum here because we comparing privileges and entitlements.Report

As coverage in today’s Globe and Mail shows, the Ontario conservative government is closing secular institutions and subsidizing religious ones. This process is accelerating. Previous commentators on this article are not Canadians, and apparently do not understand what is going on. https://www.theglobeandmail.com/canada/article-ontario-to-make-two-new-universities-following-laurentian-universitys/Report

I’m Canadian, live in Canada, and about six months ago was aware of the Ontario government’s move to enshrine at least one of these universities.

Though you might be a /bit/ quick here. At least one religious university the Ford gov’t moved in October to enfranchise has not yet been approved by Postsecondary Education Quality Assessment Board: http://www.peqab.ca/CurrentApplications.html

And, as that link shows, that prospective university would be private, not public.

“Lakehead University president Moira McPherson released a statement saying the university was not consulted and is very concerned about the move’s implications.”

The other one is a religious institution. I guess this is the one that you knew was “enshrined”? Report

Yes, for lack of a better word (admittedly). Since it would not be a public university, the government’s omnibus legislation last fall cannot be described in any way as an attempt to ‘subsidize’ the university, but rather to enshrine (or better, accredit) it.

There is no evidence right now the Ford gov’t is moving to de-secularize higher-ed in Ontario.Report

Desecularization is well underway at my institution, and at others as well.Report

Well, perhaps it is. But I’ve no way of knowing unless you provide evidence.

And the evidence you provided for your (slightly different) claim above doesn’t check out, as I’ve tried to show.Report