Kai Nielsen, professor emeritus of philosophy at the University of Calgary, has died. 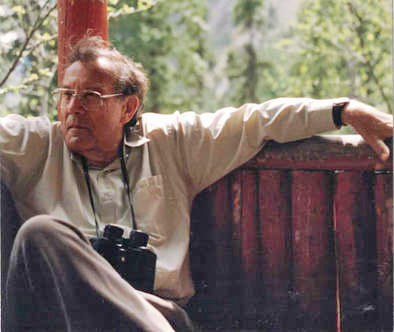 Professor Nielsen was well known for his work in political, social, and moral philosophy as well as philosophy of religion, publishing 21 books and over 400 articles. About his own work, he writes:

I have all my adult life sought to get a cogent grip on the human part of the world, to see and write things that manage to clearly articulate… a grip on how things are and, as far as that is possible, [what] could come to obtain… Would be in a significant and decent way… to be made a significant conception of life… A life that was meaningful and desirable. To have not just such a conception of such a world but to establish its fitting with reality would be a valuable thing, something that it is now far from obtaining… I speak here of a conception of a flourishing world for all where there will be no poor. I want such a world. I seek again and again in various ways to clearly and in a non-evasive way… articulate what this world would be like and how it could be achieved.

You can browse some of his writings here, here, and here.

I did not know Kai Nielsen, but a long time ago I read his 1985 book _Equality and Liberty_. Accessible and worth reading.Report

Kai was one of my teachers when I was a graduate student at U. of Calgary in the early 1980s and the first person with whom I studied Marx. On my first day at Calgary I walked into his seminar on Marxism and Morality in which, in addition to Marx, we read the papers that were soon to be published in a special issue of the Canadian Journal of Philosophy with that same title, which Kai was editing. It was a wonderful introduction to Marxism and to serious philosophical discussion. Kai came prepared each week with a long commentary on the readings. After he read that out, the debate would begin with Kai inviting, and relishing responding to, disagreements. He was also a man who lived his principles. He moved from the US to Canada in the 1960s to protest the Vietnam War and was always politically active. Kai was a warm and generous human being, often holding informal department gatherings and discussion groups at his home. After I left Calgary, I lost touch with him, but continued to read his voluminous writings and sometimes used them in my own classes. The world is a poorer place without him.Report

As my Ph.D. director at NYU Kai Nielsen resuscitated my waning commitment to teaching philosophy as a liberal arts core curriculum requirement. More importantly, he instilled in me a keen awareness of the vital role philosophy could play outside the academy.

I warmly recall, with little success, trying to disabuse him of the idea that ancient philosophy begins with Wittgenstein. However, he often would rightly insist that “It’s time to clean out the Augean stables.”

I also fondly remember that during our conversations he always left room for the serious art of trout fishing.

Losing Kai is like losing and old friend; one of the best parts of my life. He has made his exit, but not out of my life.Report

Kai was my external examiner when I defended my dissertation almost 20 years ago. He was extremely generous and supportive as I took my first steps in the academic world. It is very sad to hear of his passing, but I have many fond memories of our brief time together.Report

Kai was my Thesis advisor, and though our interactions were academic for the most part, I remember him as an incredibly charitable thinker who genuinely considered ideas that were contrary to his. I was working on integrating Heidegger and Gadamer into reflections on metaethics (often via Charles Taylor’s essays), and his inclination was to be suspicious of all the poetic jargon of the German continental philosophers. But he was always respectful, and matter of fact about his skepticism. Usually he would say something like “Why the need for such colourful language? Why not speak plainly?” A Pragmatist to the core.
I still have his chicken scratch notes on my earlier drafts. I cherish the time spent trying to decipher them, and on our meetings where we debated their substance. He was a philosopher’s philosopher, but also a very down to earth thinker. A rare balance indeed. My deepest condolences to his wife and family.Report

This is very sad. He was a fine philosopher and for a long time a very influential one. (I always thought that his 1958 views on the question “Why Should I be Moral?” anticipated Philippa Foot’s 1972 “Morality as a System of Hypothetical Imperatives” . . . but I’m no expert.) He was an essential part of a formidable Calgary department (alongside Charlie Martin, Zeno Vendler, Terry Penelhum, Jack MacIntosh, Verena Dyson, and somewhat later Brian Chellas and John Woods . . . and several other fine philosophers . . . there were no weak links in the Calgary chain). And he was hospitable, generous, and fun to be with.

I had a tough relationship with Kai for a long time. I was too analytic and too “liberal” (ie. not Marxist enough) for his taste. Which would have been fine except that his opinion was rather antagonistically held at times, and interrupted what was a good friendship. Because of him, I didn’t get the job I wanted at the time. (To be fair to Kai, the person who did get it is a very prominent figure now, so I can’t really fault his judgement.) Anyway, Kai was always so genially generous in his manner, and such fun to be with, that as time went by, we became good friends again. I was always happy to run into him and to participate in one of his cheerful and high-spirited intellectual conversations, lubricated by lots of wine. He was a man who did a lot of good, and sometimes a certain amount of harm, but in both cases casually, without much beneficence/malice aforethought.Report

Though I never studied with Kai, I knew his work well, wrote about it, and spent half of a sabbatical at Concordia (Montreal) where he was teaching part time in retirement. We met mostly at CPA meetings, and I came to know him somewhat better through his partner Jocelyne Couture, with whom I served on the CPA executive. While I found him sometimes a bit inflexible in his writing, he was great to talk philosophy with, and was open to chat about anything that had philosophical interest – a bit like Jack Smart. After I wrote one rather critical review of one of his books, he mentioned to me that, while he thought one criticism somewhat unfair, he agreed that the other was right; I was quite struck by his unpretentiousness in this regard. Though we likely disagreed about many things, I respected him for his commitment to get things right, his genuine affability, his clarity in writing, and his openness to discuss.Report

Canada has lost one of its most influential and brilliant philosophers. I first met Kai when I enrolled in his first-year ethics course at the U. of Calgary in 1984. After taking a few more courses (in political philosophy) with him, he convinced me that non-BS (that is, analytical) Marxism was the best way to understand social and political reality. Although I veered away from Marxism long ago, I retain very fond memories of Kai, especially his wisdom, compassion, honesty, and openness to dialogue–rare qualities today. He always had time for my impertinent adolescent questions while he was working away in his office. I have also tried, as a philosopher, to follow his sage advice about writing and teaching with “clarity” in all things. Although I lost track of Kai for many years after I left Calgary, I happily reconnected with him about 5 years ago. I had written a long paper that was critical of his “Why be Moral?” thesis. He extended the greatest flattery possible–he wrote a tough yet respectful reply to my paper! The long face to face conversations that I had with him at his home in Montreal a few years back will always be cherished memories. Farewell, dear friend and teacher.Report