Saul Kripke, Kit Fine, Timothy Williamson, John McDowell, Jonathan Schaffer, Graham Priest, Robert Brandom, and other philosophers are the unwitting stars of films created by an unknown YouTuber who is editing footage of them speaking in order to produce bizarre montages, shorts with augmented visuals and music, and other strange and funny videos. 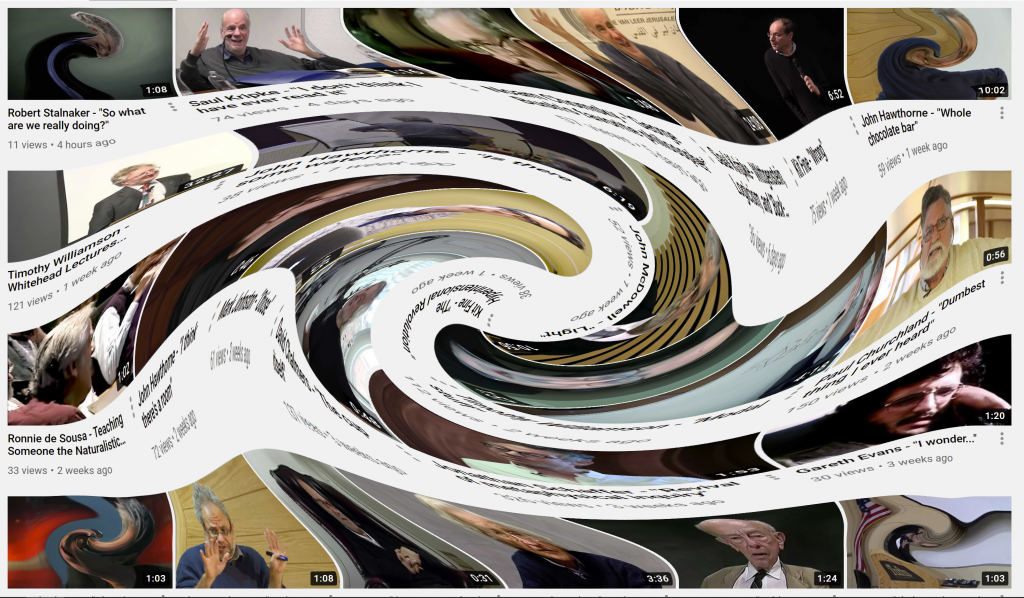 Going only by the nickname “Feallsanachd” (Scottish Gaelic for “philosophy”) and revealing only a location of somewhere in Canada, the maker of these videos has posted about 40 of them since the end of January.

This is niche humor in an absurdist style, but some of it really works.

Here, for example, is a Jonathan Schaffer “metaphysics” supercut:

Sometimes what’s funny to capture is what isn’t said, as in this “talk” by Kit Fine:

…or the highly expressive faces and gesticulations of philosophers, abstracted from their context, as we see here from Saul Kripke:

Occasionally Feallsanachd will add visual and audio effects, as in this supercut of Graham Priest talking about nothing in particular:

The videos provide not only some laughs, but also some perspective on how philosophers might come off to others.

The whole collection can be found here.

Not a single female philosopher in the entire collection???!!! Feallsanachd please up your game.Report

One of the very best they’ve done is JJT: https://www.youtube.com/watch?v=2N7AK9e6hCA, and there’s a short Judith Butler one. But there is indeed a pronounced gender skew.Report

I see now that this post is a year old and the video linked above appeared in the interim. 🙂Report