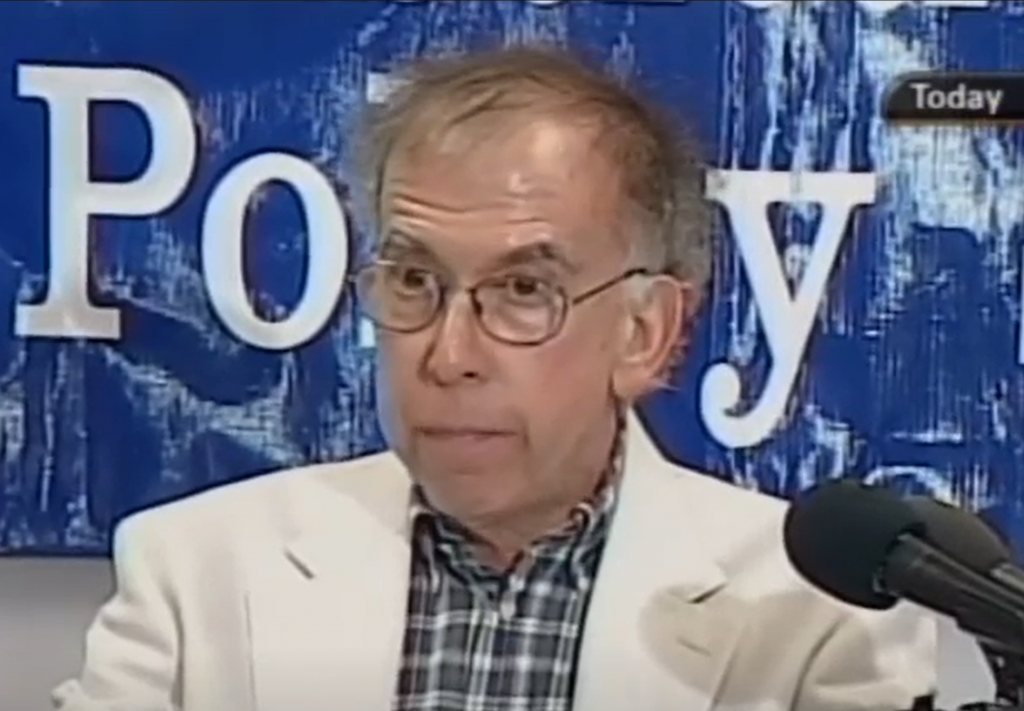 Andrew Levine, appearing on C-SPAN as part of an Institute for Policy Studies panel discussion on the two-party system in the U.S.

Levine was known for his work in political philosophy (you can explore some of his writings here) and as a political writer and commentator, writing regularly for Counterpunch and Huffington Post, and authoring or contributing to books aimed at popular audiences, such as In Bad Faith: What’s Wrong With the Opium of the People. He also had an appearance on The Tonight Show with Johnny Carson, showing off his ability fluently speak backwards in multiple languages.

In a remembrance posted by the University of Wisconsin Department of Philosophy, David Estlund (Brown) writes of Levine:

A strong interest in progressive and radical politics always informed his scholarly work. It emerged more explicitly over time, from his early work on the important affinities between Rousseau and Kant on autonomy (with Marx barely off-stage), (The Politics of Autonomy (1976)) to books on Marx and socialism, (The Future of Marxism (2003)) and critiques of the liberal tradition’s conceptions of equality and democracy. (Liberal Democracy: A Critique of Its Theory (1981). His careful approach to arguments—not a hallmark of mid-century Marxist writing—and his conversance with the most important contemporary liberal theory, anticipated what became a minor movement in the 1980’s and 90’s, “analytical Marxism.” That was a fertile period professionally, partly owing to rich collaborations with his friends Erik Olin Wright, in the Sociology department, and Philosophy colleague, Elliott Sober. (Reconstructing Marxism (1992))

Andy was indeed always skeptical of the academic profession, especially for its pernicious effects on political thought. He believed, and argued in print (most clearly in his piece in the Oxford Handbook in Political Philosophy(2013)), that without any constituency among the real people who were being theorized about, it was no surprise that the reality of their lives had scant influence on the work of academic philosophers. It made sense, then, that after leaving his 30-year stint at Madison, Andy embarked on a second phase of his career, writing more directly political articles and books (which, combined with this academic books, came to a total of twelve). (The American Ideology (2005)). And he began a new intellectual life as a prolific political commentator, unsurprisingly witty and iconoclastic but now for the benefit of a wide following. He told friends that he absolutely loved it and that he had finally found his voice, his intellectual place in the world—not as an academic after all, but as an opinion journalist—not so different (he surely appreciated) from the early career of hero Karl Marx.

Andy was an excellent philosopher and a fascinating person. He had a wonderful sense of humor. He was always very generous with his time too. All of his books are insightful, but especially his two books on Marxism. They should be read by anyone who is interested in Marx — “Reconstructing Marxism”, with Sober and Wright, and “A Future for Marxism?”Report