“Faculty and students majoring in liberal arts fields have consistently to fight back against the idea that these majors are career dead-ends, or, worse, that studying English or History is something only students from wealthy families should do,” write the site’s creators, Aaron Hanlon (Colby College), Eric Hayot (Penn State), and Anna Kornbluh (U. Illinois-Chicago). “Whether you believe these ideas are deliberate lies or simply common misperceptions, if you care about the humanities, you need to push back.”

The site features PDFs formatted in different sizes to print out and display or distribute. For example: 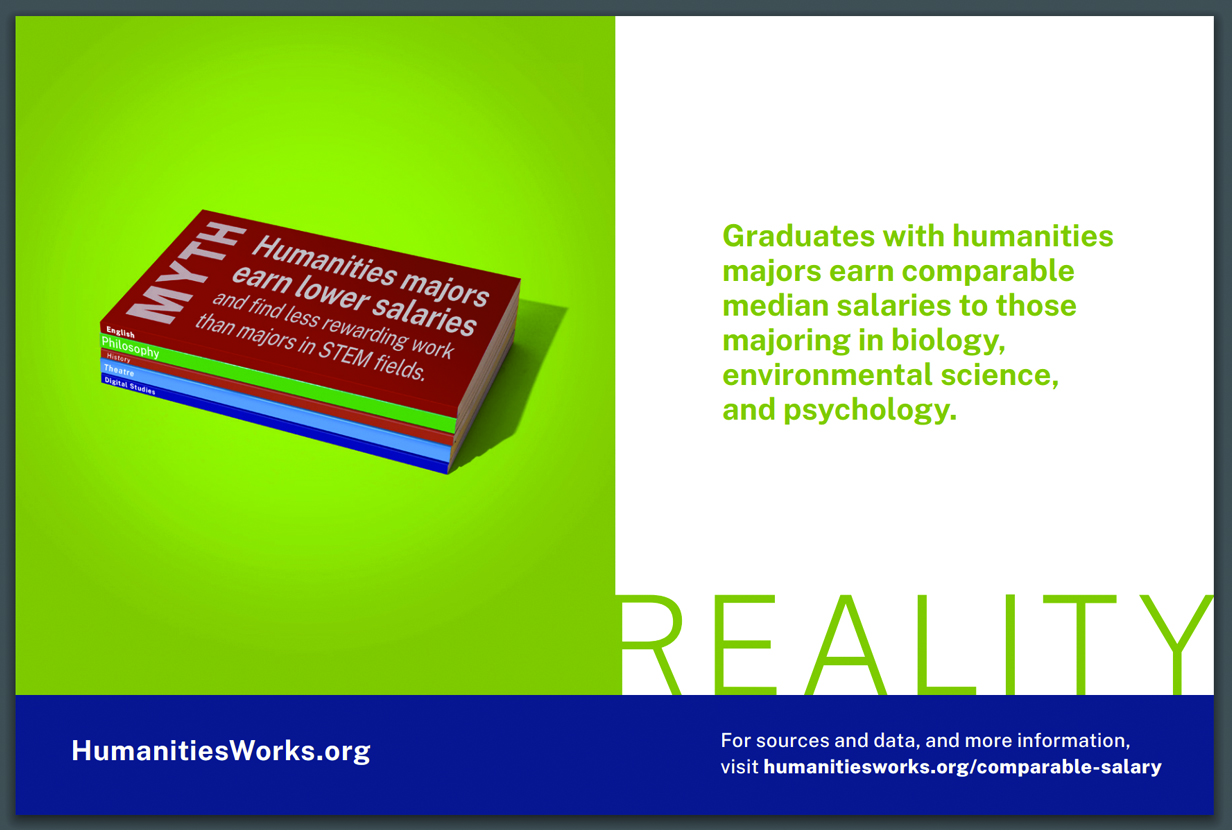 You can check out the rest of the posters here.

It looks like a good idea generally, but on several of these, it seems that the “Myth” is written in a clear font on an appealing background so that it attracts your eye from far away, while the “reality” is in a paler font, with formatting that doesn’t attract the eye. As a result, these posters might have the unintended consequence of reinforcing the myth rather than the reality!

(This is a pet peeve I have about many things contrasting “myth” vs “reality” – in general, I think it’s a lot more helpful to emphasize the truth in a way that succeeds in dispelling the myth for anyone that believes it, but that doesn’t explicitly state the myth again and thus accidentally reinforce it.)Report

Fascinating that they cherry pick what three other majors they choose as a comparison to dispel the supposed ‘myth’ of lower pay. Yes (gasp) psychology and bio majors don’t make much more. Show me accounting, engineering, computer science, statistics, and nursing. If you look at the Georgetown data they rely on, you’ll find much higher pay.

The source they cite for the underemployment poster says in no uncertain terms “STEM graduates are less at risk of being underemployed. Degree holders in most STEM fields
(science, technology, engineering, and mathematics) are less likely to be underemployed in the first place and, when they are, more easily escape the underemployment trap than those majoring in other disciplines.”

I really don’t know how we philosophers, who value truth and clarity so highly, can with good conscience continue to promote our own discipline with either outright deceptive claims or specious ,quite unsubstantiated ones about the value of ‘humanities skills.’ I love philosophy and think it’s important, but that doesn’t mean it will make you more money or make you more employable.Report

I agree with Gradstudent4. The fact that this dodgy data is getting pushed by Humanities Grads makes me doubt the wonderful ‘critical thinking skills’ they say they are endowed with.

Another thing wrong with the posters is that they pick out Bio majors. It is unfair to judge the salary of a bio major with just a bachelors degree as representative of other STEM subjects. The Georgetown data show that bio majors have the highest uptake of graduate degrees (58%) and the highest graduate degree wage premium (63%!). The data the poster-makers are citing is just for those with a bachelors degree, which is misleading given the high wages someone with a bio degree can attain if they go the graduate study route, which also appears to be the expectation given that over half do so. The average for all bio majors with graduate degrees is $92k, for all other majors with grad degrees it is $78k. Compare this to the median data for all humanities and liberal arts graduate degree holders ($70k) and Philosophy ($68k). Bology majors are kicking our arses!

The poster makers say it is a myth that “Humanities majors earn lower salaries and find less rewarding work than majors in STEM fields.” To back this up they selectively use the Georgetown data, which plainly states:

“STEM majors not only have the highest wages, they experience the largest wage growth over the course of their careers (Figure 1.4). Their wages grow by 50 percent, compared to 28 percent growth for college graduates in teaching and serving-related majors (education, psychology, and social work)”Report

“free posters, postcards, and handouts”
misleading content aside what critical thinker came up with this way to influence the kids?Report

I think I can provide a bit of an interesting perspective here. After graduating as a philosophy major in the mid-2010s, my first job was running the register at a liquor store ($9/hr!). It took me 15 months to find an internship at a “real” company, which transitioned into a full-time corporate job starting at $36k. Three years later, I left that company for a new role. One year after that (this year), I was promoted into the world of six-figure salaries. I don’t think this is rare in the humanities: if you can comprehend a Kant, or a Weber, or a Locke, understanding and solving problems in the private sector is relatively easy by comparison. While I’m not going to discount the role of luck in my particular case – though for that matter, I know of very few people who can – having worked with people from many different degree backgrounds in non-STEM corporate roles, those with a background in the humanities typically possess far greater depth and clarity of thought and presentation than their business/communication/psychology major peers.

I personally would go as far as to say that, on average, an undergraduate in philosophy is about equivalent to an MBA in terms of their ability to move the needle and think strategically about business problems. Granted, the philosophy major will need some time to ramp and grasp the environment and problem-sets of business.

As others have pointed out, STEM is not the proper point of comparison. And it doesn’t need to be! The majority of well-paid corporate jobs don’t require any quantitative skills beyond a weekend course in Excel. (Professional academics don’t seem to know this… they seem to think that the only “real” jobs out there for undergraduates are highly-paid engineering roles, and that everyone else is a barista.)

So if students in the humanities perform just as well or better than their peers in Business, Communications, Psychology, etc, and the majority of well-paid corporate jobs are well within reach for all of them, where’s the disconnect? It’s on the demand side: the humanities are underestimated, or just forgotten, by those doing the hiring. Read the job description for any “entry-level” marketing, sales, HR, consulting, or other non-STEM corporate role. This is what you’ll see: “Requirements: Bachelor’s degree in Business, Communications, or other related field.” This is what undergraduates see as well.

At a time when the humanities are under budgetary scrutiny, I understand the impulse to push as many students as possible into these programs and classrooms with a case for ROI. But until the demand-side problem is solved, these students will still have difficulty relative to their peers in equally “soft” fields of study. Like I said, it took me 15 months post-graduation to find an internship.

TLDR: The “skills” granted by a study in the humanities, particularly philosophy, are absolutely valuable, employable, and critical in the workplace. The problem is that the ones doing the hiring don’t know that, and so long as they’re asking for Business students, the majority of debt-laden undergraduates will oblige. And significant numbers of humanities graduates will still be stuck in jobs at Starbucks.

(A note on this particular campaign: if you want to move the needle, ditch the unscrupulous statistics. Students aren’t dumb, they know that biology is different than computer science. Do this instead: get a list of high-profile successful people who majored in the humanities, and real quotes from them about their value. The founder and CEO of Slack, which was recently acquired by Salesforce for $27 billion, majored in philosophy. He’s on the record contributing his success to philosophical study. If you’re going to cherrypick, at least cherrypick narratives and real stories.)Report

But, hey, maybe these professors would have been even worse without the education, so that’s not yet evidence.Report

Many of the criticisms in this comment section are addressed in the FAQ on the website. In my view, the answers in the FAQ are satisfactory, but I imagine that many will disagree with me about that.Report

@Grad Student — I don’t remember there being an FAQ when I initially looked at the site, so it may be in response to some of these criticisms. But maybe I missed it.

Look at the goal-post moving in the FAQ: “We’re saying you shouldn’t avoid majoring in a humanities field out of fear that you won’t find a good job or earn a good living. Because that’s not true.” So yes, it’s true that college-educated humanities majors don’t always end up homeless. Put that on a poster if you like, and I will have no qualms.

However, that is not what the poster they offer says. The poster literally says “MYTH: Humanities majors earn lower salaries and find less rewarding work than majors in STEM fields.” Which is….not a myth.Report

I agree with you that the cards are not good. I wanted to point people to the FAQ because I thought it was much better than the original cards. I also pointed people to the FAQ because It’s hard for me to get too mad at what the creators of the website were trying to do with the cards, even though they executed it poorly. There are some important facts in the area of what the cards say. For instance, the fact that majoring in a humanities field doesn’t invariably make you very much less able to earn a livable wage, even though it makes you less able to earn a lot of money. Plus, majoring in business, psychology, or biology without a plan to earn a graduate degree doesn’t make you very employable. I know many people who are much less happy and employable than they would be if they had internalized some of these facts, so I wish they were more widely disseminated. I certainly wish I had known them when I was younger! So I think professors should try to communicate a more nuanced version of the spirit of the website to their students (e.g. something like what is in the FAQ).Report