The Scotsman, one of Scotland’s leading newspapers, called for a greater emphasis on philosophy in education, saying “we need to vaccinate ourselves against the virulent lies of people like Trump and the best way to do that is to teach the wisdom of Socrates and co to our children.” 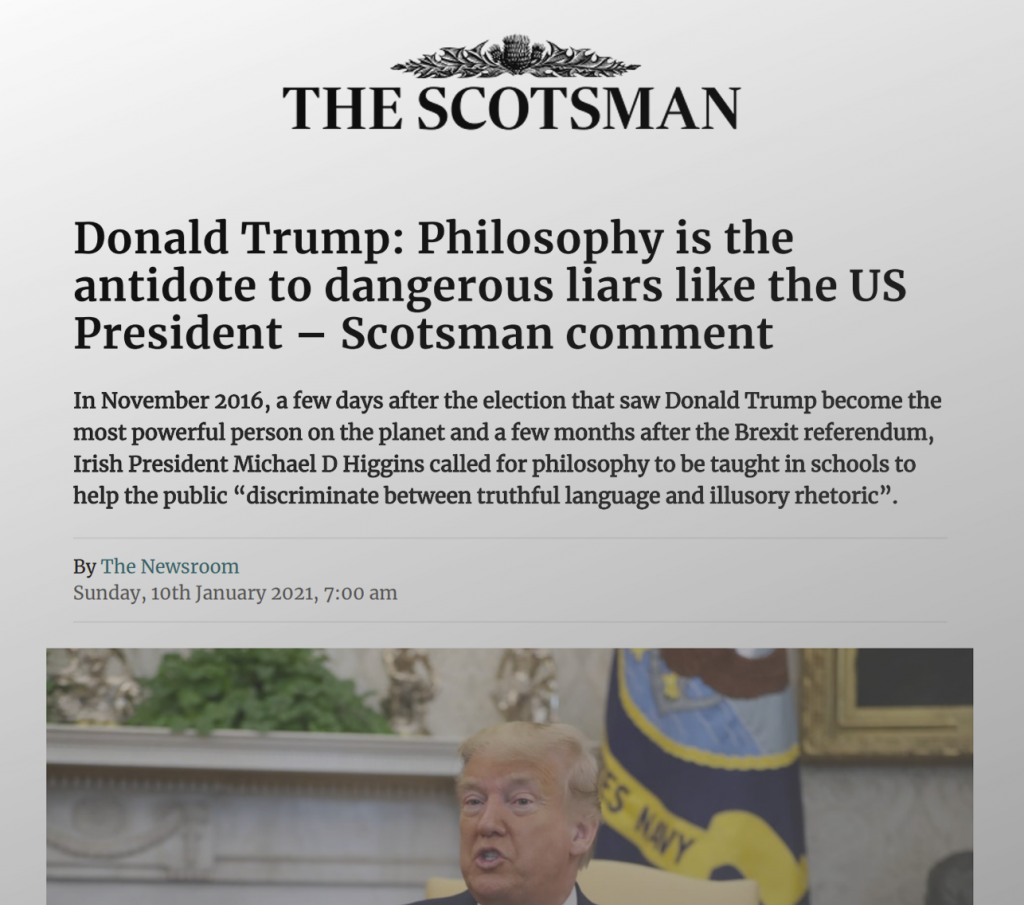 In a brief editorial on Sunday, the editors quote remarks by Irish president Michael Higgins shortly after the election of Donald Trump:

The teaching of philosophy is one of the most powerful tools we have at our disposal to empower children into acting as free and responsible subjects in an ever more complex, interconnected and uncertain world… A new politics of fear, resentment and prejudice against those who are not ‘like us’ requires the capacity to critique, which an early exposure to the themes and methods of philosophy can bring.

Noting that “since the mid-20th century, philosophy has not been given the same level of importance as it was in the past,” the editors state that philosophy can help counter “bizarre conspiracies” and other false beliefs that animate far-right populists. “We are heading towards a new world in which philosophy and the ability to think logically become increasingly important,” they write.

While philosophers may find the editorial’s argumentation for its conclusion a bit wanting, the call for more teaching of philosophy in a major newspaper may nonetheless be significant as an indicator of a more welcoming attitude toward philosophy in the broader culture, or an opportunity to push for more philosophical initiatives.

The most important things to teach are actual critical thinking skills: knowing what an argument is, how to evaluate different forms of evidence, and enough of a grasp on statistical reasoning to avoid appeals to anecdotal evidence and various fallacies. This is what will help people avoid being duped by political rhetoric.

Teaching kids that the one true moral system is some universalist, egalitarian version of Kantianism or consequetialism while avoiding alternative viewpoints from people like Nietzsche or Nozick and the various objections to moral realism does not count as teaching them critical thinking.

I am wary of things that suggest that philosophy be taught as a cure to certain political views, even if they’re fascist. Moral philosophers just start off agreeing that hating people merely because they’re different is bad. It’s considered a reductio for any moral theory that permits it. I doubt any academic philosopher would even argue for such thing when playing devil’s advocate, even if they thought there was an interesting argument for it that can be refuted. Of course, this isn’t to say that this is the wrong reaction or that philosophers are mistaken. But to suggest that philosophy can critique something that the field uncritically assumes is false as a sort of methodological first-principle is rather dishonest.Report

There is a place in academic and pedagogical space for teaching and positively advocating principles and virtues (take your metaethical pick) that clearly swing across the spectrum of theory. Honesty, truth-telling, patience, caring, sympathy, humility, etc.–characteristics that clearly move us all forward rather than into the darkness we see now increasingly around us. They’re in all the big theories. Yeah, I know, we need to teach (say) emotivism as well–as has been unwittingly embraced and practiced by autocratic forces here and abroad as an effective means to advance power over reason. But we need to show our students that too–even if emotivism is true–its consequences are potentially ultimately destructive to us all. Yes, teach and let them decide–but do not flinch from showing them what may result as a result of their embracing these views.Report

Unfortunately, my training in philosophy vaccinated me against accepting triumphant but unsupported conclusions about the value of philosophy or philosophy training.

Notice that this editorial did provide any actual evidence for its conclusion. It more or less equates philosophy with a certain mindset and then assumes that teaching people philosophy will in fact deliver this desirably mindset.

If we were genuinely interested in these conclusions, we’d want, say, to find some sort of natural experiment where large groups of people were made to take philosophy, and then compare them to otherwise identical people who were not, and then see if they are indeed immunized from certain kinds of poor thinking, according to some plausible operationalization.

In writing *Cracks in the Ivory Tower*, I did a lit search for evidence of this, and found only a few rather poorly done studies. There is, alas, not much support for the triumphant conclusions of this editorial.Report