The following is a guest post* by Eric Schwitzgebel (UC Riverside) on trends in the race and gender of people earning Ph.D.s in philosophy in the United States over the past 47 years.

A version of this post first appeared at his blog, The Splintered Mind. 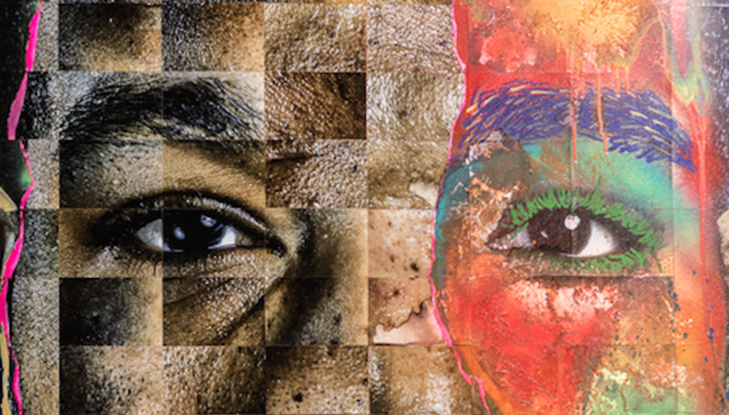 [detail of mixed media artwork by Ervin A. Johnson]

The Race and Gender of U.S. Philosophy PhDs: Trends Since 1973
by Eric Schwitzgebel

On December 1, the National Science Foundation released its data on demographic characteristics of U.S. PhD recipients for the academic year ending in 2019, based on the Survey of Earned Doctorates (SED), which normally draws response rates over 90%. NSF has a category for doctorates in Philosophy (which is normally merged with a small group of doctorates specifically in Ethics). The primary available demographic categories are (as usual) gender and race/ethnicity.

For philosophy, I have NSF SED data back to 1973, based on a custom request from 2016. In a 2017 paper, Carolyn Dicey Jennings and I analyze those data through 2014. Today I’m doing a five-year update.

How about the past five years? Has there been any increase? There is some reason to hope so: Women constituted about 30% of undergraduate philosophy degree recipients in the U.S. from the 1980s to the mid-2010s, but recently there has been a substantial uptick. Could the same be true at the PhD level?

NSF SED asks “Are you male or female?” with response options “male” and “female”. There is no separately marked box for nonbinary, other, or decline to state. Respondents can decline to tick either box, but the structure of the survey doesn’t invite that and those who decline to state are always a very small percentage of respondents (in Philosophy, only one among 2424 respondents in the past 5 years). Thus, nonbinary respondents might be underrepresented.

Here are the most recent five years’ gender results: 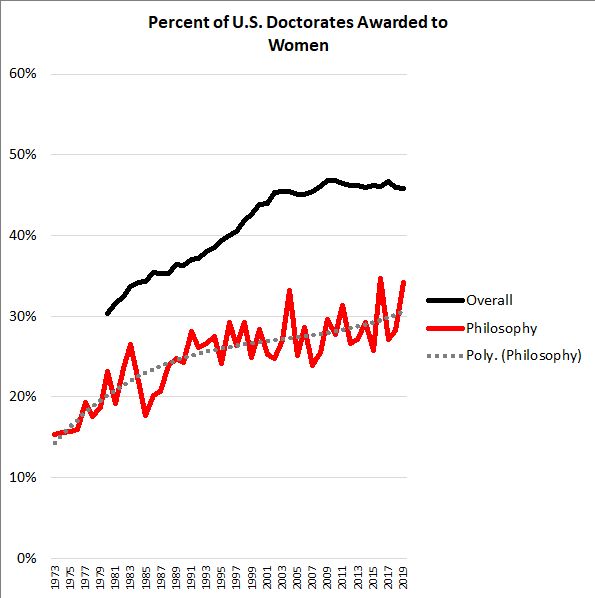 Note the curvy trendline: In 2014, Carolyn and I found that a quadratic trendline fit the data statistically much better than a linear trendline—reflecting the visually evident rise from the 1970s to 1990s and then the flattening from the 1990s to the mid 2010s. For the current analysis, I added one degree of freedom so that the trendline could reflect any apparent increase or decrease since the mid-2010s. As you can see, there is now a gentle trend upward. In other words, the percentage of Philosophy PhDs in the U.S. who are women appears to be back on the rise after a long stable period. However, I think we need a few more years’ data before being confident that this reflects a genuine, long-term trend rather than being statistical noise or a temporary blip.

Race and ethnicity are more complicated, in part because the questions and aggregation methods have varied over the decades. As of 2019, race/ethnicity is divided into two questions:

With all that in mind, here are graphs of race data in Philosophy back to 1973 for the six main analytic groups, with comparison lines for all PhDs to the extent I was able to find appropriate comparison data. (All graphs and numbers exclude participants for whom ethnic or racial data were unavailable, generally under 5% per year.)

Philosophy PhD recipients are disproportiately White, but there’s a long term roughly linear decrease in percentage White, both among PhDs as a whole and among Philosophy PhDs. 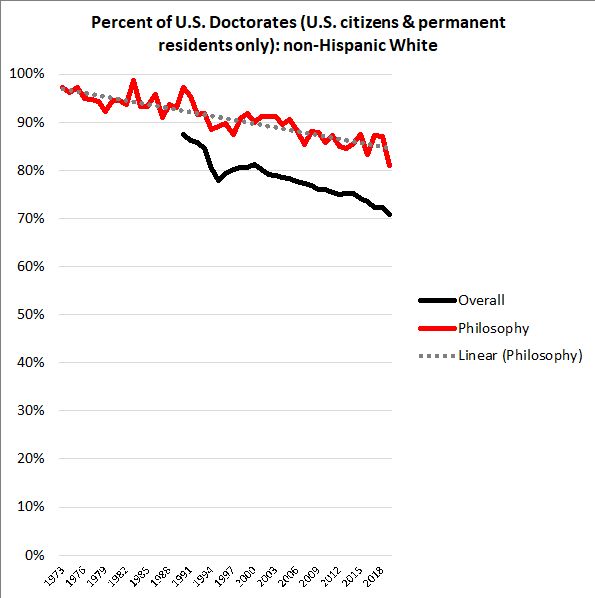 In 2019, among U.S. citizens or permanent residents who received PhDs in Philosophy, non-Hispanic Whites constituted 81% (285/352) of those for whom racial and ethnic data were available, compared to 71% of PhDs overall. (The sudden decrease in the mid-1990s is probably an artifact related to the complication about Asian respondents.)

As is evident from the next two figures, the decline in percentage White is largely complemented by increases in percentage Hispanic and Asian. 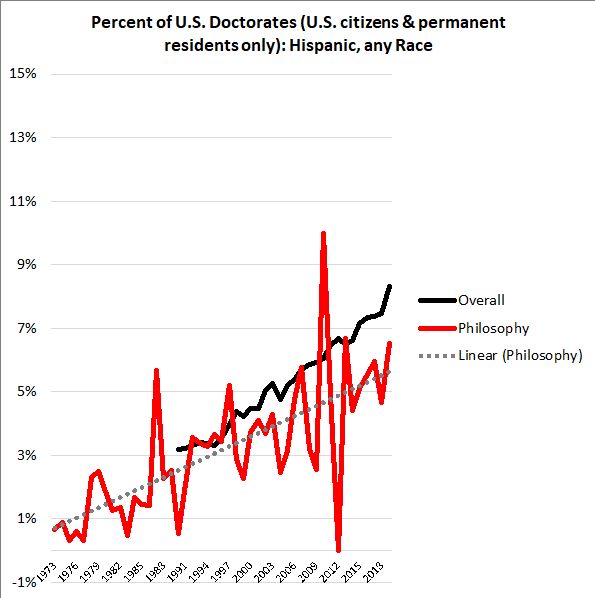 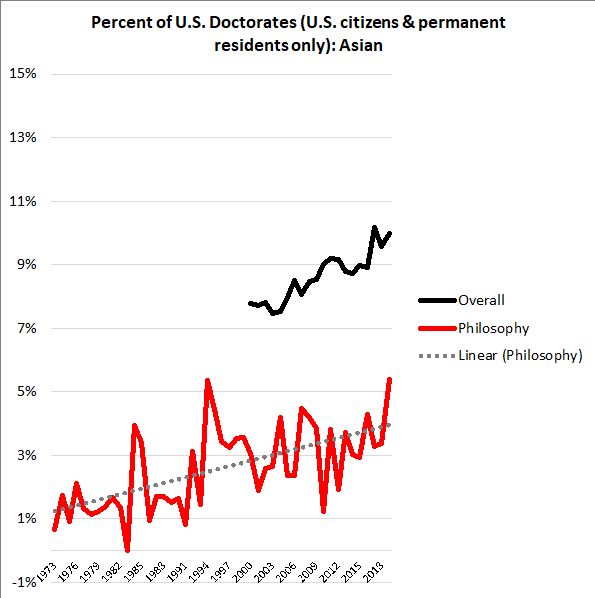 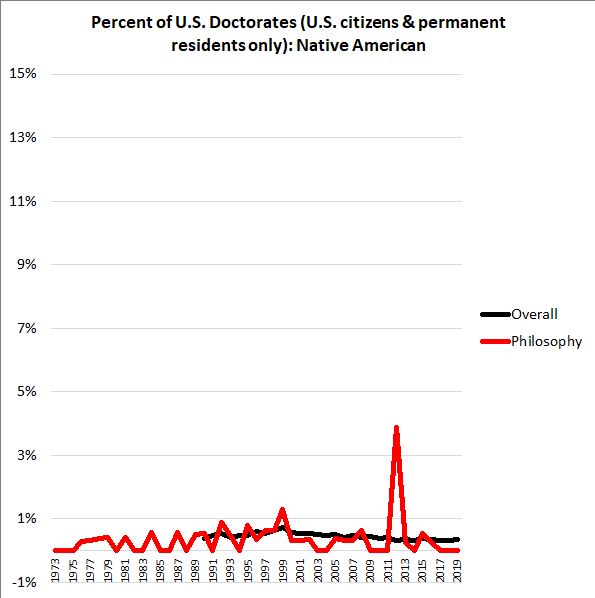 Very few Philosophy PhDs were awarded to American Indians and Alaskan Natives. In many years the number is zero. Native Americans are generally underrepresented among PhD recipients—probably even more so in philosophy than overall (despite an interesting spike in 1999), and with no sign that the situation is changing. If anything, the trendline appears to be down. Over the past five years, Native Americans have received about 0.3%-0.4% of PhDs overall and 0.2% of philosophy PhDs (3/1843, including zero in the past three years).

As is evident from the chart below, multiracial students are relatively uncommon but rising fast—now about 3% of PhD recipients both in Philosophy and overall. 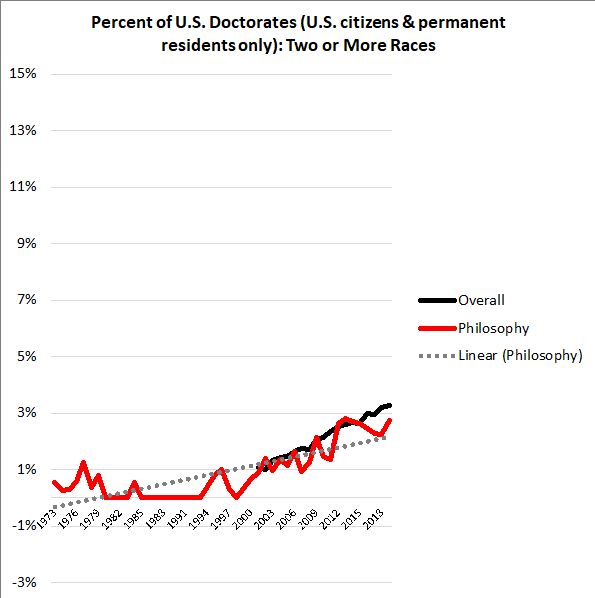 I save Black/African American for last. The situation is difficult to interpret. Like Native American students, Black students have long been underrepresented in Philosophy both at the Bachelor’s and the PhD level with little increase in representation over the decades. However, if we’re willing to squint at the data, and possibly overinterpret them, this looks like the percent of Philosophy PhD recipients who are Black might have recently started to increase. Thus, I’ve drawn not only a linear trendline through this graph but a third-degree trendline, similar to the one used for women, reflecting the possibility of a recent increase after a relatively flat period through the mid-2000s. 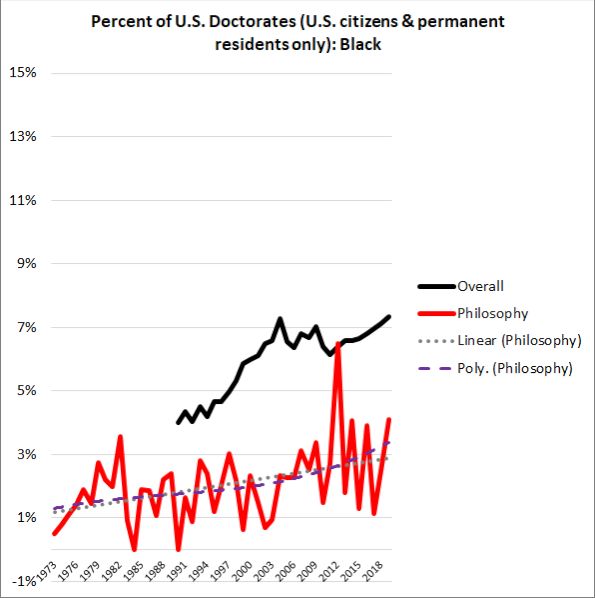 Whether that apparent increase is real I think we won’t know for several more years. But if so, that also fits with a trend that Morgan Thompson, Eric Winsberg, and I noticed for Black students to be increasingly likely to express an intention to major in philosophy and maybe also to complete the major. (Obviously, if so, it would not be those same students already completing their PhDs but rather something more general about the wider culture or the culture specifically in philosophy.)

This is great! Thanks, Eric. I posted back in May 2019 something similar for APDA’s data, but it is really good to see convergence: http://placementdata.com:8182/feminist-philosophers-blog-impact-on-placement/. (Note that the charts don’t show up on the mobile version of the blog, only the desktop version.)Report

I’d forgotten about that analysis! Thanks for linking over to it. It’s good to see the convergence. The fit between ADPA and NSF SED is reassuring regarding both datasets and the solidity of the conclusions.Report

Thank you for mentioning nonbinary and other gender atypical people in your post, even though most surveys have yet to achieve the same level of inclusivity! I would be very curious to know if there is any preliminary or provisional data that offers a picture of how many Gender Nonconforming people pursuing their PhD, and similarly for sexual orientation.Report

Interesting question! I’m not currently aware of any good sources on this, but I might well be missing or forgetting something. HERI has some data on sexual orientation and trans/cis for incoming undergraduates that Morgan Thompson, Eric Winsberg, and I analyzed here: http://schwitzsplinters.blogspot.com/2020/05/gender-and-sexual-orientation-of-first.htmlReport

So basically by far the biggest leak in the pipeline is at undergrad level, and when we try to remedy this by hiring underrepresented groups post-PhD we are still closing the stable door after the horses have bolted?Report

Super helpful, thanks Eric. And as already noted, great to see the basic convergence with Carolyn’s prior analysis.Report