John Jenkins, president of the University of Notre Dame and member of the univerity’s Department of Philosophy, has contracted COVID-19 after visiting the White House at the end of last month for the ceremony announcing the nomination of Amy Coney Barrett to the Supreme Court. 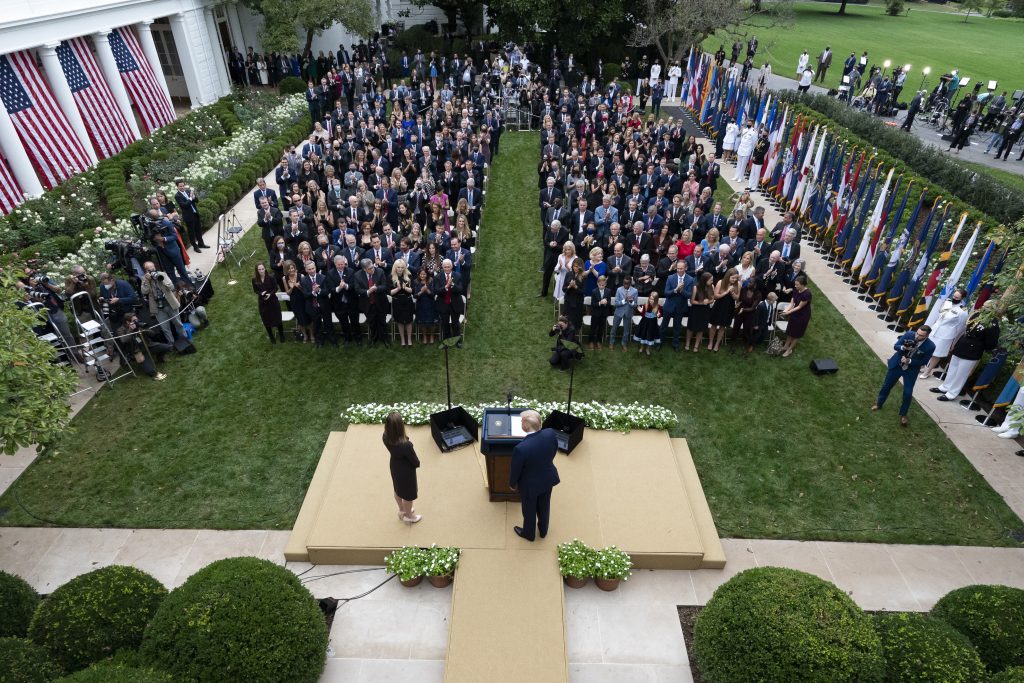 Father Jenkins shook hands with others and was not wearing a mask at the ceremony, actions he expressed regret for in a public letter afterwards.

Since the event took place Sept. 26 in the White House Rose Garden, several attendees, including Father Jenkins, President Donald Trump, First Lady Melania Trump, Senators Thom Tillis and Mike Lee, and former Trump counselor Kellyanne Conway, have tested positive for COVID-19. Pictures and videos of the event have shown the roughly 150 attendees sitting close to one another, hugging and not wearing masks. Father Jenkins was in attendance with several Notre Dame faculty and administrators. Barrett is an alumna of Notre Dame Law School and taught there from 2002 until being nominated to the Seventh U.S. Circuit Court of Appeals in 2017.

Father Jenkins’s diagnosis has received particular attention within the higher education industry, as he was among those college presidents who aggressively pushed for campus reopenings. In a New York Times op-ed in May, Father Jenkins argued that reopening Notre Dame’s campus was safe and “worth the risk.”

Students at Notre Dame have launched a petition calling for Jenkins to resign, and the text of the petition was considered as a resolution by the student Senate. It says:

[Update: this resolution was apparently voted down; see comment from Fritz Warfield, below.]

Though President Jenkins has certainly earned plenty of criticism, I am reasonably sure that the resolution you discuss was voted down by a considerable majority in the student Senate.
Where did you get your information that it passed?
Report

Thanks, Fritz. I was mistaken in writing that it had passed. I’ve updated the post accordingly.Report

In stark shameful contrast to Gettier’s brilliance are the millions who now hold that justified true knowledge does not entail belief. He will always be an

Ben, I apologize, it seems that not only was that not Gettier's picture but as stated by Christian Kendall-Daw on Twitter it is a picture […]

Alan White on To φ Or Not To φ

Canada has lost one of its most influential and brilliant philosophers. I first met Kai when I enrolled in his first-year ethics course at the […]

Dragi Gospodine Vuckovicu, If moral support, letters and the like could be of any help against the corrupt Vucic government, there are quite a few of […]

The best reporting/analysis on what is happening at Laurentian is by Alex Usher. His blog post from today is excellent https://higheredstrategy.com/laurentian-blues-7-the-process/ (The 7th in an

Yes, the Whitmore coffee shop Napkins! I recall one with a simple but decisive counterexample to a model I was then proposing. Of the many […]

Bentes on The Battle for Philosophy in Serbian Schools (guest post)

The same situation in Brazil (and this is not just a consequence of the terrible political situation we are, but part of a big project).

R.C. Sleigh, in the Introduction to the festschrift for Gettier's 60th birthday, mentions that Gettier's student Del Ratzsch only half-jokingly wanted to publish The Collected

For UMies from long ago, those would be Whitmore napkins, Whitmore being the UMass administration building in the coffee shop of which Gettier used to

Ed Gettier gave me the best advice for writing: "Above all, make it clear. And make it short if you can." I've tried my best […]