“Effective immediately, Ergo is implementing a manuscript submission fee of $20. Authors will be able to opt out of the fee if they are unable to afford it.”

That’s from an announcement from the managing editors of Ergo, an open access academic philosophy journal, in which they discuss the growth of the journal, what is involved in running it, and its future plans.

In deciding to charge a submission fee, Ergo joins Philosophers’ Imprint, another open access academic philosophy journal (it asks that submissions be accompanied by a donation of $10.00 to help defray costs).

The editors’ statement is below. 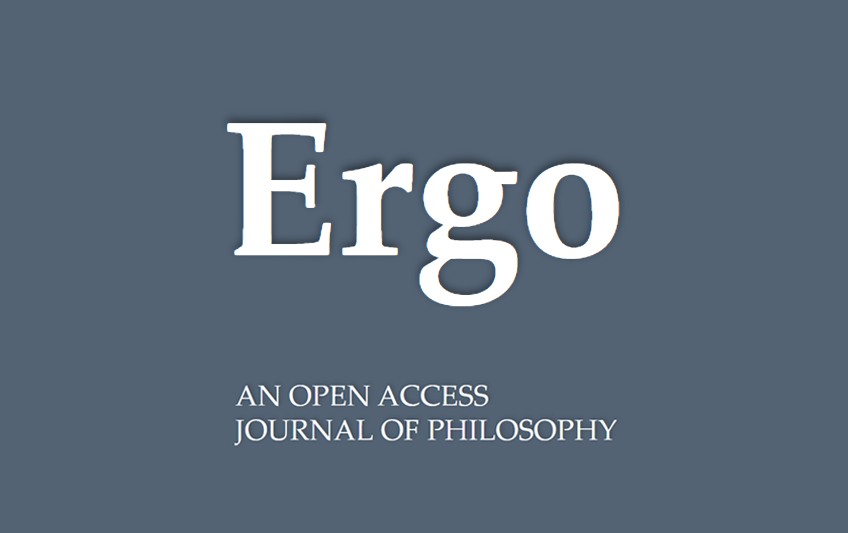 Letter from the Editors

The six of us took over the editorship of Ergo in mid-2019, marking the first editorial handover in Ergo’s brief history. We salute Jonathan Weisberg and Franz Huber for their outstanding work in creating the journal and building it into a premier philosophical venue. Ergo has evolved in important ways over the last several years, as we’ll explain, but first we are introducing the biggest change yet.

Effective immediately, Ergo is implementing a manuscript submission fee of $20. Authors will be able to opt out of the fee if they are unable to afford it. We also plan to implement an institutional donation option that would allow members of participating departments to opt out of the fee. The fee will not apply to revise-and-resubmits. Submission fees will be paid to Syracuse University and will be used only to cover journal operations. Ergo will continue to be free for everyone to read, and this will always be the case.

Here is a bit of background to explain why this is necessary. Ergo’s expenses in 2018 totaled close to $13,000. This included $2,588 for typesetting, $2,892 for publishing, and $7,229 for copyediting. Those numbers increased significantly in 2019 (though the precise numbers are difficult to calculate due to the change in editorship and institutional affiliation). Since early 2019 we have attempted to raise funds from institutions and foundations. We did manage to secure vital funding from Syracuse University that has enabled the journal to stay afloat for a year, but those funds are not renewable. We will continue to try to find a long-term funding solution for Ergo, and if we succeed, the submission fee could be only temporary; but in the current funding climate we are not optimistic about a quick solution.

The Growth of Ergo

Ergo’s financial situation is a product of its success. In 2013, Ergo’s first year of operation, decisions were reached on 141 submissions, of which nine were published. By 2019 those numbers had increased to 806 decisions and 44 accepted manuscripts. This is a testament to the work of Jonathan, Franz, and the rest of the editorial team in building Ergo’s reputation.

As the number of submissions has grown, our stable of editors has grown to meet the workload. We have added 33 new area editors in the last year, in twelve subfields, and currently have a total of 89.

When Ergo first began, submissions were dominated by epistemology, and to a lesser extent metaphysics, language, mind and ethics. Over six years the submission pool has broadened. We now publish a significant number of papers in areas not well-represented in other highly-regarded journals, such as aesthetics and feminist philosophy. We have received so many submissions in these areas that we now have four aesthetics editors and three in feminist philosophy. Philosophy of race, philosophy of religion, political philosophy, and ancient philosophy have also seen notable increases. The biggest increase of all has been in ethics, where we received an astounding 170 submissions in 2019. We now have 19 ethics editors to handle this workload.

Through these changes Ergo has remained very efficient. The average decision time in 2019 was 23 days, and the average time to decision for papers that were externally refereed was 53 days. All of these statistics and more are publicly available in the journal’s statistics section.

We maintain our commitment to Ergo’s founding principles: publishing high-quality, open access philosophy from as broad a spectrum of philosophers as possible, keeping our process as transparent as possible, and evaluating manuscripts efficiently.

We will also continue our efforts to find a stable funding source for Ergo that would allow us to return to a policy of free submissions. In our view, the cost of running academic journals should be borne not by authors, but by academic institutions. A system where colleges and universities support journals directly, without for-profit publishing companies, would be better and less expensive for authors, readers, and libraries.

Warm thanks to all of our talented and hardworking area editors, who donate their time and energy to making Ergo a success. Thanks to the hundreds of philosophers who submit your work to us, and to the referees who spend many hours evaluating that work and in many cases helping authors to improve it. Thanks to Syracuse University’s College of Arts and Sciences, the Syracuse University Libraries, and the Syracuse University Philosophy Department for keeping Ergo operational over the past year. Thanks to Amanda Page, Lydia Wasylenko, Sarah Workman and Christina Docteur for their assistance with funding efforts. Thanks to our amazing copyeditor, Robert Mason, and to Michigan Publishing, who have been extremely responsive and easy to work with. Finally, thanks to Jonathan and Franz for developing this unique journal and entrusting it to us.