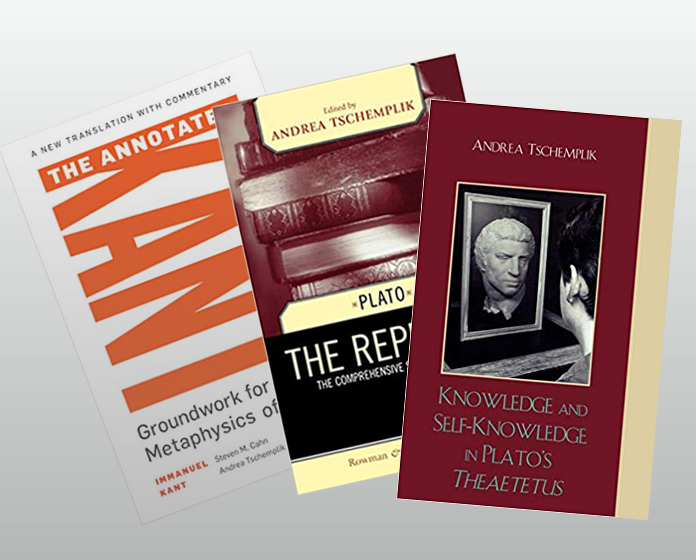 Professor Tschemplik worked mainly in Ancient Greek philosophy. Her books include Knowledge and Self-Knowledge in Plato’s Theatetus and a translation of Plato’s Republic. More recently, she worked on a new annotated translation of Kant’s Grounding for the Metaphysics of Morals. At the time of her unexpected death she was writing a book on the aesthetic dimensions of philosophy titled Plato and Kant: The True, the Good and the Beautiful.

She was a member of the faculty at American University since 2001. She had also taught at Hunter College, Upsala College, Drew University, and George Washington University. She earned her MA in philosophy at Bryn Mawr and her PhD at the Graduate Center of the City University of New York.

Andrea was one of my professors in undergrad. She was brilliant in a way that I couldn’t understand at the time (and likely still can’t). But she was also kind, and welcoming, and encouraging, in all the ways that an undergraduate could ask. She will be missed.Report

I was devastated to learn of Andrea’s passing. She taught me how to read (and re-read) philosophical texts. And she showed me how to take philosophical texts seriously without taking myself too seriously in the process. I’ve always wanted to be the sort of professor that Andrea was. My heart goes out to her family, friends, colleagues, and students.Report

Professor Tschemplik was beyond intelligent, compassionate, and kind. I loved talking with her during office hours and in our class discussions. She always encouraged everyone to talk during class discussions and made everyone feel comfortable to speak up. Whenever I talked to her during office hours she just made me feel very calm. There was something about her intelligence that is hard to describe because it honestly felt so powerful. Her passion for philosophy and morality inspired me in every class session. I truly looked forward to each class session and really wanted to do well in the class to show her how much I respected her. I also loved how passionate she was for the Washington Nationals. I remember she came to class multiple times during the World Series with the biggest smile on her face and explained how she was behind on grading our papers because she was up all night watching the game. I loved this about her because it showed how real she was with her students and didn’t put on a facade. She was serious about her work and also passionate about so many other things and people. My heart and prayers go out to her family, friends, colleagues, and students. I wish that I could thank her again for everything she taught me and the mark that she left on me.Report

I am devastated by this news. She was my philosophy professor at GW and I majored in Philosophy because of her.Report