The Department of Philosophy, Religion, and Leadership at Adrian College in Michigan is one of three departments targeted for elimination by the administration of the university.

According to a letter (below) from the Adrian College Association of Professors, seven faculty were laid off over the summer and eleven other faculty layoffs are planned.

The cuts were initially announced in a memo in February, 2020, and reiterated, with further details, in a memo on August 21st. 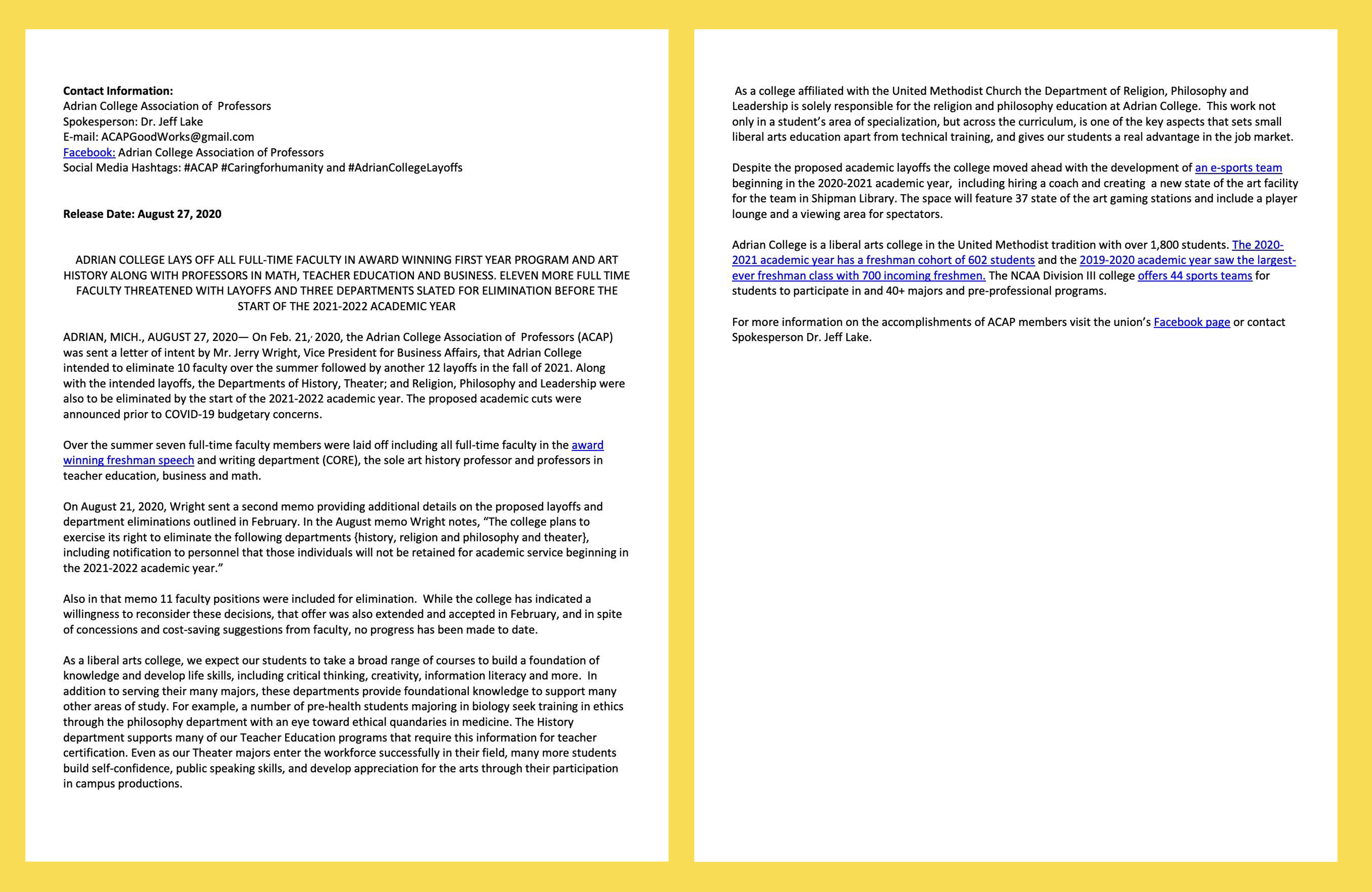 According to local media (see also here), a group of more than 1900 alumni from the small college have joined together in a Facebook group to protest the cuts. Said one former graduate of the college: “I would like to request the administration provide the specific data driving these decisions and an articulation of how, exactly, the eradication of these programs fits with Adrian’s stated mission as a liberal arts institution/ As an alumna of one of the targeted programs and a longtime supporter of the College, I am deeply concerned future students will be denied the curricular depth enjoyed by past generations of Adrian alumni.”

It can’t hurt to send a letter of protest to the President and relevant VPs of Adrian College, as the elimination has yet to happen. President Docking can be contacted at: [email protected]. And VP Wright can be contacted at: [email protected]. Not only would the elimination of this department be a great disservice to the students and faculty of Adrian College (and totally out of step with its purported mission), but it would be a disservice to philosophy — which benefits from the contributions of the faculty at Adrian, and from the protections that are supposed to be afforded by academic tenure.Report

These layoffs have been rescinded. There was a tremendous outpouring of support from alumni, and increasing media attention.
Thanks to everyone who may have sent a letter of support.

As a political science professor at Adrian, my department was not slated for closure, but was threatened by the loss of philosophy and history courses for our majors. Thank you for playing a role in publicizing this.

The cuts to humanities are apparently being reversed: https://www.mlive.com/news/jackson/2020/09/passionate-feedback-prompts-adrian-college-president-to-reverse-cuts-to-humanities-departments.htmlReport