What we did not anticipate in that first summer was the intense relationship our campers would develop with each other, with philosophy, and with the experience of developing an intellectual community in the setting of a philosophy summer camp.

The following is a guest post* by Claire Katz, the Murray and Celeste Fasken Chair in Distinguished Teaching and Professor of Philosophy at Texas A&M, where she also serves as Associate Dean of Faculties. She founded and directs  P4C Texas, which includes the Aggie School of Athens Philosophy Summer Camp for Teens. 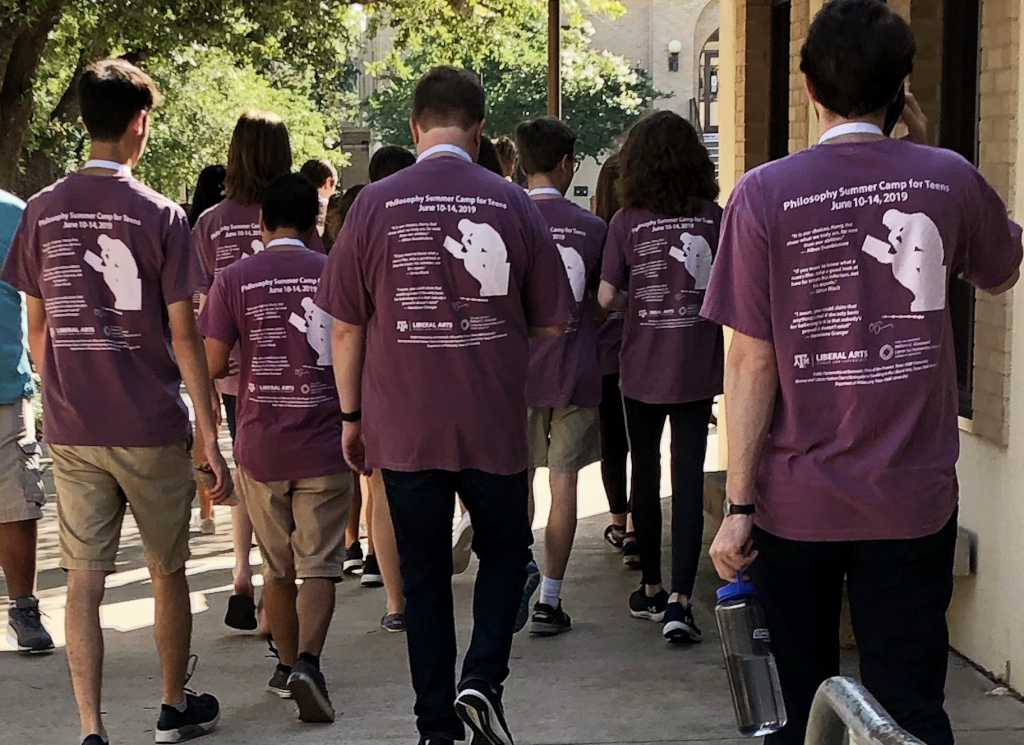 “I see the cave allegory in books I read or conversations I have [with other people]… [In those discussions], it is clear that they sometimes don’t want to know the truth. They’d rather stay chained.” ~~Evelyn Conway, 11th grade (Philosophy camper since 2016)

This past June marks the 5th installment of the Aggie School of Athens Philosophy Camp for Teens at Texas A&M University. Coinciding with that anniversary, my edited collection, Growing Up with Philosophy Camp: How Thinking Develops Friendship, Community, and a Sense of Self (Rowman and Littlefield, 2020), is now available. The contributors to the volume participate in philosophy camps (as directors, facilitators, or campers) that are hosted around the US and abroad (Canada and Paris).

The reflections that were written by the campers, some who have returned to philosophy camp as facilitators, allow the campers to speak in their own voice about the impact of the philosophy camp experience on them. Some of these campers have now graduated from high school, entered college, and are majoring or minoring in philosophy. In other cases, they are simply taking more philosophy classes than they might have otherwise. All of these campers attribute their positive relationship to philosophy to their experience in philosophy camp. The reflections contributed by several parents provide a unique perspective describing the way this impact reverberates outside the camp experience. 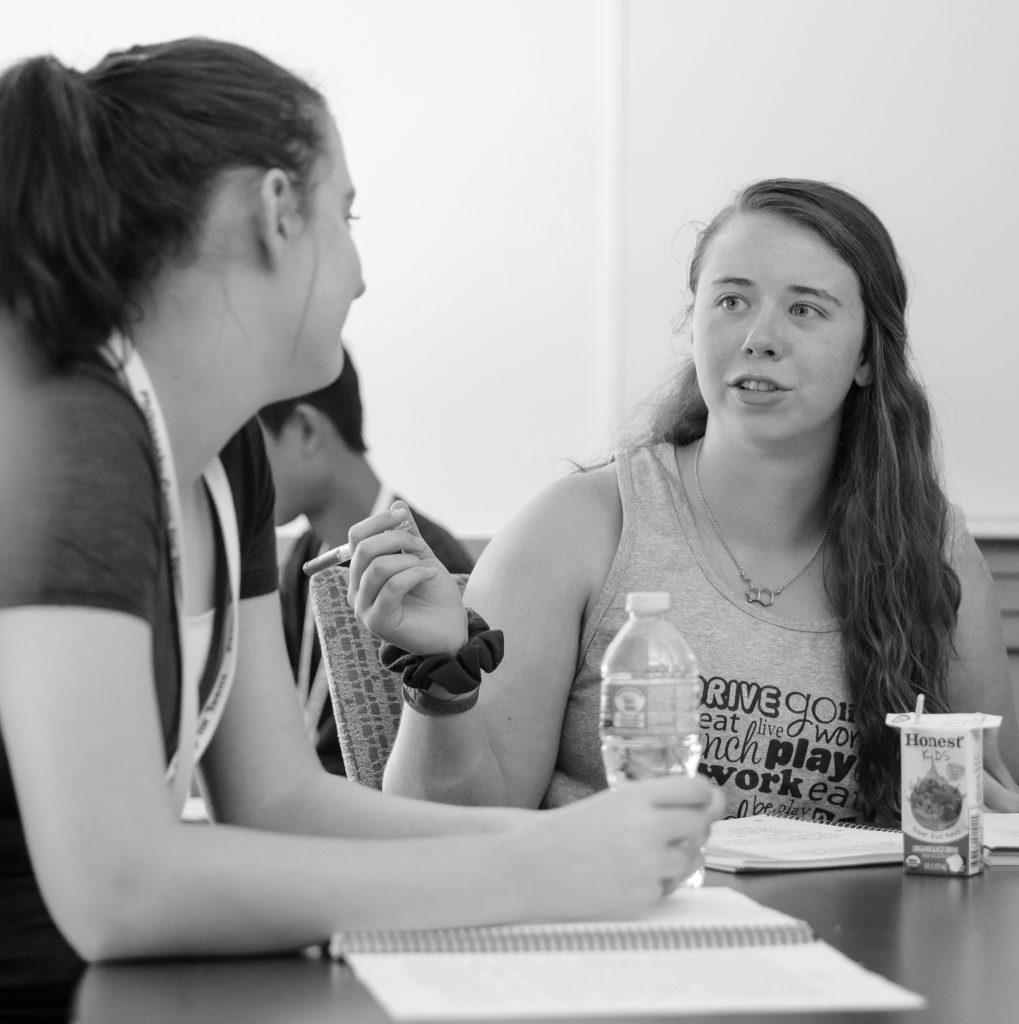 “I assumed [philosophy camp] would be a fleeting experience for me—not even registering on the seismic scale with which I measure the impact of events on my life. But I was so, so, so wrong. During this one-week camp, I learned more about myself and others and the world than I have learned in any of my high school classrooms. Philosophy camp taught me that there was more to a problem, to a statement, to an argument than initially meets the eye; that the true mark of an intellectual is to consider an idea from a variety of different perspectives, searching not necessarily for a concrete solution, but for a deeper understanding. That cliché statement about how the journey is worth more than the destination meant something to me with philosophy.” ~~Olivia Conway, sophomore in college (Philosophy camper 2016-2018, facilitator 2019-2020)

When we hosted our first camp in 2016, we were not sure if it would be a one-time event or the first of many. We have been fortunate to have had the support of the university in this endeavor. Over the course of the past five years, we have developed several initiatives related to K-12 philosophy. These include undergraduate and graduate courses in which students learn both the theory and practice of K-12 philosophy, K-12 philosophy workshops for educators, community of inquiry pedagogy workshops for graduate students and faculty, pre-K-12 philosophy in our local schools, and most significantly, the philosophy summer camp. 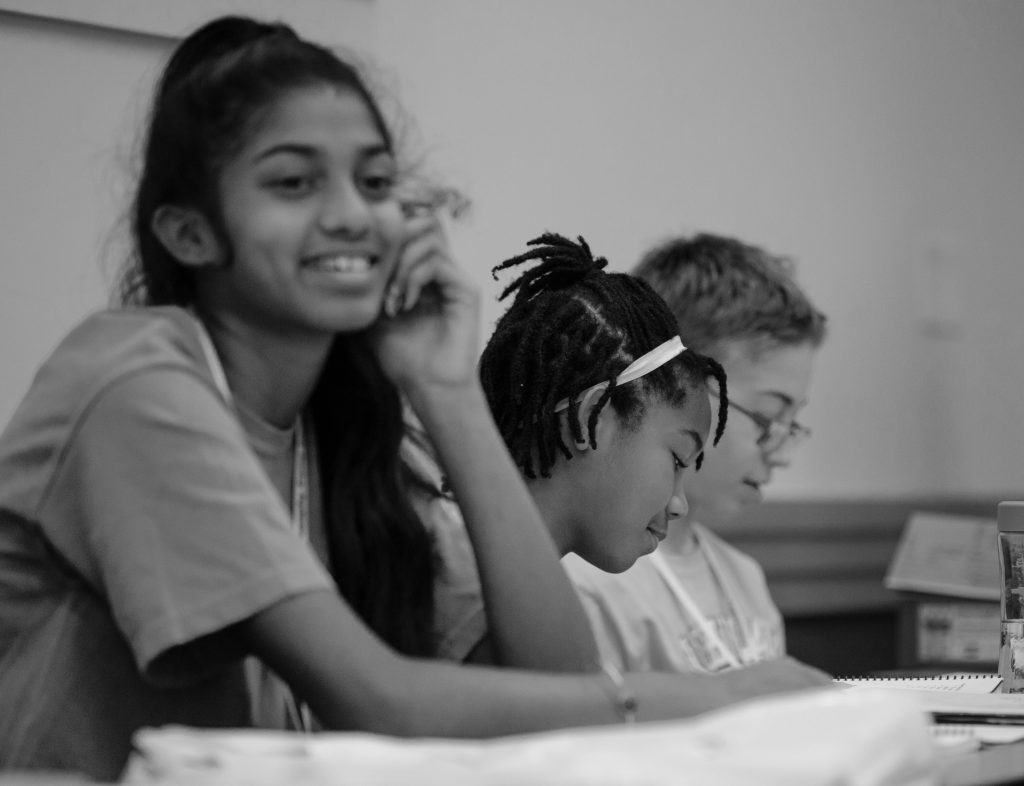 Our goals for the first philosophy camp were modest: We hoped that the experience would be fun, that the campers might develop a positive relationship to philosophy, and that they would be motivated to take some philosophy classes in college. What we did not anticipate in that first summer was the intense relationship our campers would develop with each other, with philosophy, and with the experience of developing an intellectual community in the setting of a philosophy summer camp. Kenji Blum, a former camper/current facilitator who is now a senior in college with a philosophy minor, aptly summarized this experience:

“As individuals, we brought our own unique thoughts and perspectives to the community, but together, through our dialogues, I observed my own attitude and positions begin to develop. Learning from both facilitators and my fellow campers, I acquired a new vocabulary that enabled me to explain to others that which I could not previously put into words. The philosophy camp showed me the value of being part of a Community of Inquiry in addition to confirming what I already knew about the importance of using critical and creative thinking in approaching these complex problems and questions.”

We also did not anticipate the extent to which philosophy camp would spill over into the larger community. Parents reported not only that dinner conversations permanently changed, but also their own eagerness to hear what their campers had discussed that day. That is, philosophy camp had an impact on the whole family. Several of our campers have attended every philosophy camp since 2016. Now rising juniors in high school, they started a philosophy club at their high school in the hope that they might share the experience of discussing philosophy with more of their classmates. Each summer we notice the same thing—the themes change, the material changes, but the desire for an intellectual community and the desire to have friends with whom one can discuss ideas that matter to them, remains constant. 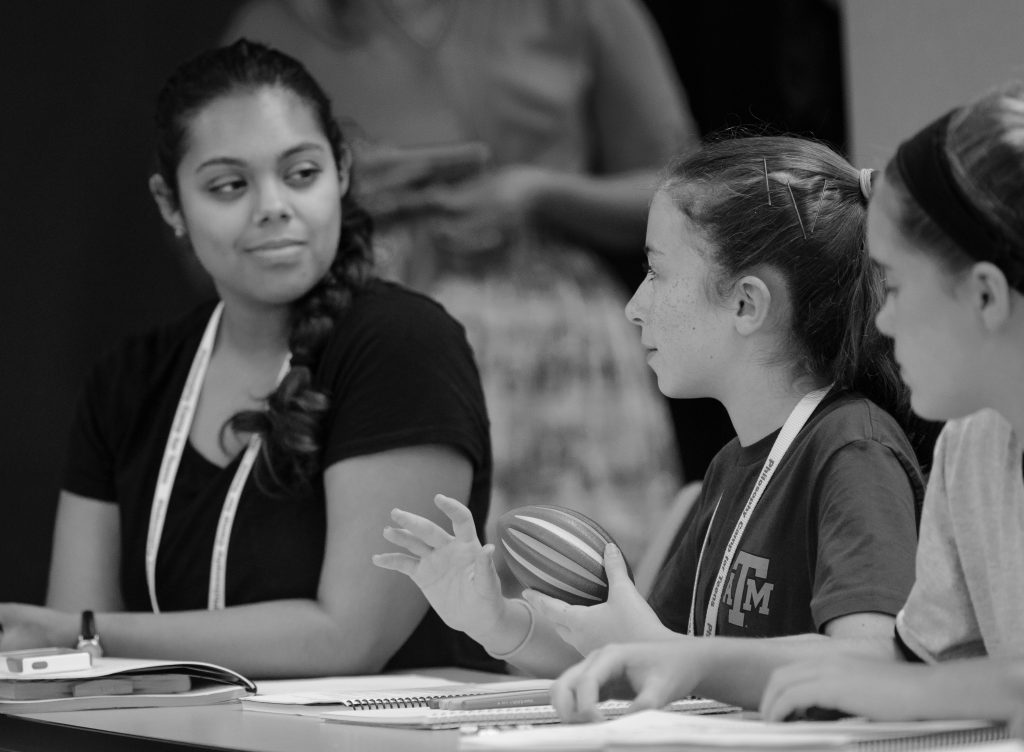 Jadyn Driver, a former camper-turned-facilitator, and now a first-year college student, sums up nicely what many of us were also thinking:

“The thought going to philosophy camp was an outlandish concept.  What kid imagines summer as going to a camp about philosophy?  I really didn’t know exactly what philosophy was and yet it still sounded like going to summer school.  Well to my surprise, philosophy camp was not at all like I initially imagined it. And then two years later, I became a junior facilitator for the 2019 camp.” (camper 2017-2018, facilitator 2019-2020)

Like Jadyn, we know that philosophy camp was and maybe still is a strange idea. But now having experienced it, we cannot imagine the summer without it. We hope that the book will inspire others to try hosting one.

Summary of the Chapters in Growing Up with Philosophy Camp 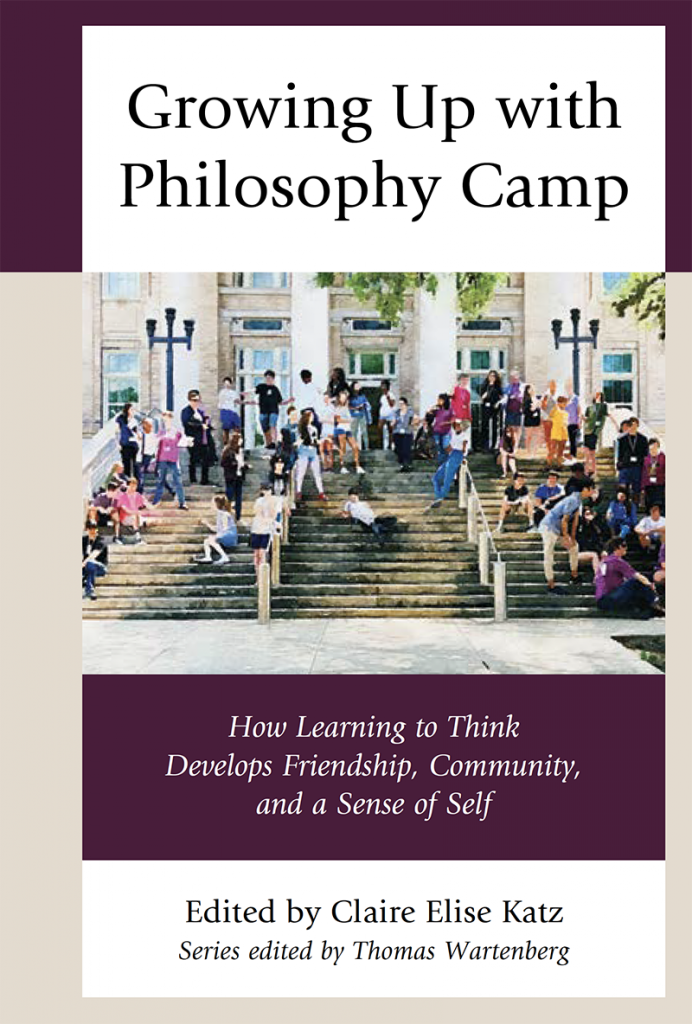 The chapters in Growing Up with Philosophy Camp that were written by camp staff explore the main themes that underpin the philosophy camp experience. A brief piece by Pamela Matthews, Dean of the College of Liberal Arts at Texas A&M, explains how she was persuaded to provide financial support to develop the P4C program and the philosophy summer camp at Texas A&M. Embree and Katz approach the development of friendship through Aristotle’s conception of the virtuous friendship and the role this kind of friendship plays in the success of the community of inquiry; Conway’s essay also considers friendship while focusing on Plato and the role of eros in that experience; Anderson’s chapter develops the connection among Wittgenstein, philosophy as therapy, and philosophy for young people; the two essays by Fletcher and Murgue, respectively, focus on the connection between creativity and philosophical dialogue; the chapter by Tsuji and Johnson describes a philosophy camp for six year old children that focuses on environmental themes; the camp that Phillips and Allen discuss in their chapter develops reasonableness in its campers; and Kahn, a facilitator with Corrupt the Youth, describes the only philosophy camp (to my knowledge) that is residential.

A second volume, Philosophy Camps for Youth: Everything You Wanted to Know about Starting, Organizing, and Running a Philosophy Camp, providing nuts and bolts guidance, will be published with Rowman and Littlefield in February 2021.

What did you do this year during the pandemic?Report

We changed the format, not only the delivery (Zoom) but also the meeting frequency. All the camps our different. Our camp typically met for one week from about 8:30am to 3:30pm. I know that other camps (e.g., UT debate camp) ran their programming with a morning session for several hours and then an afternoon session. We decided that was just too much zoom for everyone. So we met from 2pm-4pm, MWF afternoon for three weeks. Not ideal but it was good to stay connected to the campers and for them to stay connected to each other. We also scrapped our original theme and asked the campers to generate the themes for the three weeks.Report

Great to hear of the success of the camps and will look out for your book. I anticipate this question might be answered in the book, but I am wondering how a camp might start in an otherwise perfect location.

I live in a university town with a vast array of summer camps. As a parent of two I know that as many camps as are offered, there still aren’t enough. The university offers a hugely popular music camp but no philosophy camp. As a philosophy grad student, I tend to feel like the department would not be interested in offering them due to status quo, wanting summers off, and simple curmudgeon-ness quite honestly.

I am also a former educator and could see the benefit of the camps, despite the obvious financial hurdles. I would think some grad students might want to be involved, but other than that, any helpful thoughts on starting the process? Thanks for any thoughts 🙂Report

Hi Dean–I do have some suggestions and I’ll recommend the second book that is due out in February 2021. The second book is literally a how to with many different camp models, ideas for funding, materials, activities etc, . Feel free to contact me at my university email. You can find me in the Texas A&M Philosophy dept–hyperlinked above the article.Report

Also I’ll add–we have so many camps here including an engineering camp that recruits 100s of kids. But our camp has become quite popular for kids who are aspiring to the STEM fields and also those who already know they like more humanities type material.Report