Philosophy professors who will be teaching courses like “Contemporary Moral Problems” this fall may be interested in adding a unit on race, racism, protests, and related issues that have been at the forefront of the public’s attention recently. 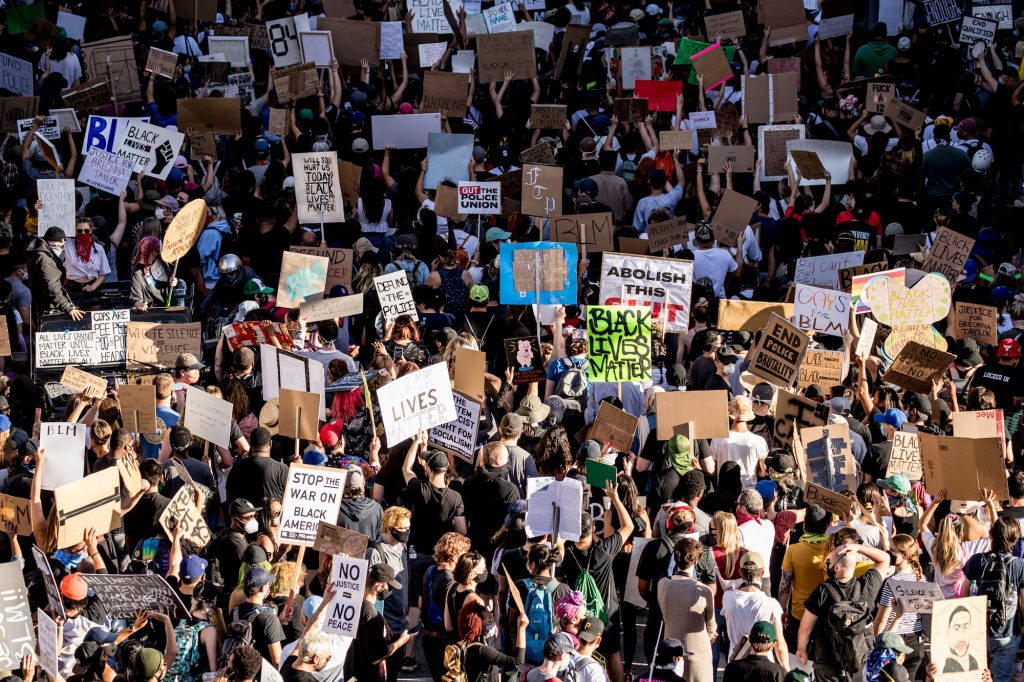 What set of readings and other materials would you recommend they assign?

David, since people like videos, I have an 8-minute video that sums up Huemer on drugs and mentions one of Michelle Alexander’s relevant points:

If anyone can recommend accessible pieces on the individual vs. systemic racism distinction, I’d be grateful. Some of Garcia’s work defends an individualist position (e.g.., his 1995 piece), but a fairly specific one (that racism is a vice grounded in volition). Mills has some work responding to Garcia, but because of the specific nature of Garcia’s position, it might be too narrow for a lower-level class. I apologize if I’m missing some obvious pieces–this is not an area I’m very familiar with.Report

1000-Word Philosophy: An Introductory Anthology is attempting to compile relevant materials along these lines here: https://1000wordphilosophy.com/call-for-teaching-materials/

Here is the current main set of relevant essays that we wish to expand on:

Ethics and the Expected Consequences of Voting by Thomas Metcalf

Ethics and the Expected Consequences of Voting by Thomas Metcalf

John Rawls’ ‘A Theory of Justice’ by Ben Davies

Plato’s Crito: When should we break the law? by Spencer Case

In my Intro to Ethics courses for non-majors, I’ve regularly taught a 3(ish) week unit on how we should respond to injustice (so really, it ends up being about the nature and justification of protest). There are personal and political components; I vary the former pretty regularly, but I think I’ve hit on a good sequence for the latter. For the personal section, I’ve recently used the Nussbaum/Srinivasan anger debate and Linda Radzik’s paper on atonement, since that concerns how we should respond to injustice when we are its perpetrators rather than its victims. I end up excerpting all this work since it’s written for professional philosophers, but the main lines of argument are relatively straightforward

For the political section, I use Douglass’s “What to the Slave is the Fourth of July?” speech (sometimes this is supplemented with his “Letter to Thomas Auld”), Boxill’s “Self-Respect and Protest,” which covers the Washington/Dubois debate over the value of protest, and King’s “Letter from a Birmingham Jail,” which never fails to surprise people who only know the bare minimum of MLK’s thought. Basically, all of this can be read as is, even by non-majors. This political part of the course is almost always the part I get the best feed back on, even though it only lasts 3-4 lectures.Report

On the metaphysics of race (and, inevitably, its relationship with racism), I’ve had success teaching the following trio in lower-level classes:

The Taylor piece allows for a natural transition to class discussion of the ethics of protest and policing in relation to race. On that note, I’m looking forward to teaching:

I teach an undergraduate course on Racial Justice and Injustice. It may be a bit advanced for some classes, but most of my students when I’ve taught it have no background in philosophy, and they handle it well. I think a lot of these readings would work in shorter modules within more general courses. (I do two days on racial justice in my Intro to Political Theory course, mostly on discrimination theory.)

I only do one reading on the concept of race. I like Anthony Appiah’s “Race, Culture, and Identity” for this introductory purpose.

I then do a couple weeks on discrimination: Sophia Moreau, “What Is Discrimination?” (She also has a new book coming out that I might assign from.) Deborah Hellman, When Is Discrimination Wrong? Kimberle Crenshaw, “Demarginalizing the Intersection of Race and Sex”; John Gardner, “Liberals and Unlawful Discrimination”; Jack Balkin and Reva Seigel, “The American Civil Rights Tradition: Anticlassification or Antisubordination?”; Richard Arneson, “Discrimination, Disparate Impact, and Theories of Justice”; Elizabeth Anderson, “The Imperative of Integration,” chaps. 7-8; Glenn Loury, “Racial Inequality and Developmental Affirmative Action.”

Finally, some weeks on applied topics:

In my ethics classes, I’ve been regularly teaching a short online article by Charles Mills called “The Political Economy of Personhood” https://nationalhumanitiescenter.org/on-the-human/2011/04/political-economy-of-personhood/Report

I have found success in my Intro level Contemporary Moral Issues course with the following. I give the students a set of core readings, and then I ask a subset of them to find supplemental readings for the class to discuss. For a unit on reparations for Black Americans, I used these core readings, and they worked quite well:

Barbara Fields, “Slavery, Race, and Ideology in the United States of America”
Ta-Nehisi Coates, “The Case for Reparations”
Adam Ruins Everything (video), “The Disturbing History of the Suburbs”
Adolph Reed, “How Racial Disparity Does Not Help Make Sense of Patterns of Police Violence”

Then students found great readings to share with their classmates, representing a diverse set of voices and viewpoints.Report

Sadly, it doesn’t seem to be in print anymore (I think the publisher may have gone out of business, but I’m not sure) but otherwise Naomi Zack’s short textbook _Thinking About Race_ would be a good option for this. It covers most the desired topics, is self-contained, and is well suited for a philosophy course without supposing a lot of philosophical background. It got a good reception in the class I TA’d for her several years ago. You can see it here: https://www.amazon.com/Thinking-About-Race-Naomi-Zack/dp/053453564XReport

Her 2018 book, Philosophy of Race: An Introduction, is also good for these purposes, especially as it pushes beyond the US-centric discourse in a way that much of Phil of Race does not.Report

Thanks – I should read it!Report

I’m teaching a contemporary moral problems course this fall. Just want to say first: thanks for this post.
Does anyone know of anything recent and accessible that can be assigned on policing in general? I’m looking for basic (preferably not contingent consequentialist) arguments on why there should/shouldn’t be (violent) police enforcement at all, and I don’t want to just assign Hobbes. (Obviously there’s not-so accessible stuff on state violence, or when it is accessible, isn’t as general as I want. I know of Suemas Miller’s book, “Shoot to Kill,” but couldn’t find anything brief enough in it. Right now, I’m thinking of assigning parts of Huemer’s chapter on “predation” in his book on state (il)legitmacy.)
I’m also interested in accessible but still philosophical work on restorative justice. I saw Radzik’s work on atonement mentioned, which I’m thinking of assigning. But I would be interested in any other specific recommendations.
Thanks!Report

I regularly teach Braithwaite’s “Restorative Justice and a Better Future” in my Philosophy of Crime & Justice course, which is upper-division but cross-listed for Criminal Justice majors and so doesn’t presume any philosophical background. The article introduces the main tenets of restorative justice in an engaging manner and goes over quite well with my students.Report

It may be getting a little late to add books for Fall courses, but one that is just 100 pages that I’ve used successfully at the lower-division level and that is pretty relevant at the present moment is:
Zack, Naomi. White Privilege and Black Rights: the Injustice of U.S. Police Racial Profiling and Homicide (Lanham: Rowman and Littlefield, 2015).
Other books on race that are a bit longer that might be worth considering are:
Alcoff, Linda Martín. The Future of Whiteness (London: Polity Press, 2015). [175 pp.]
Mills, Charles W., The Racial Contract (Ithaca: Cornell University Press, 1997). [133 pp.]
Sullivan, Shannon, Good White People: the Problem with Middle-Class White Racism (Albany: SUNY Press, 2014). [162 pp.]
Taylor, Paul C. Race: A Philosophical Introduction, Second Edition (London: Polity Press, 2013). [203 pp.]
All these books can be taught at the lower-division level, some more easily than others. It’ll depend on what individual instructors want to focus on, what perspective they want to convey, and how much work they want to put into teaching a book that they are perhaps picking up for the first time. Zack explicitly talks about justice as a correction of injustice, but all these works will require discussion of restorative justice in some sense. Mills’ book has the most biting sense of humor and is a personal favorite of mine, but all these books are clearly written, well-argued, and are exciting & worthwhile to talk about with students. They would all also fit into a 2-3 week course unit and be pedagogically coherent, since they are single-author books.Report

The first time I taught on race in an intro class was with OUP’s Intro to Philosophy text, edited by Perry, Bratman, and Fischer. It contained Appiah’s ‘Racisms’, which was originally printed in Anatomy of Racism edited by Goldberg.

I would also recommend Coates, “The Case for Reparations”. Also, his “The Black Family in the Age of Mass Incarceration” is excellent and gives the students some relevant recent U.S. history. Kaplan and Valls “Housing Discrimination as a Basis for Reparations” is accessible and well-argued. Two other pieces suitable for lower-level classes: Collins, ch. 4 of Black Feminist Thought and Davis, Women, Race and Class. (I use chapters 4 and 7).Report

Just finished teaching philosopher Myisha Cherry’s article on “Love, Anger, and Racial Injustice” to sections of Intro to Ethics, which includes students with no philosophy preparation from a wide range of majors. Having now had a chance to review student writing and exam performance relative to this reading, it turns out that the work was accessible and inspired carefully reasoned responses and further reflection. Students were readily able to connect it to their thoughts about contemporary events. 10/10, will continue to use this article in future iterations of the course.Report