Recent protests against racism have included or prompted the removal of statues and monuments honoring historical figures associated with racist actions and views around the United States and elsewhere around the world.

This is not the the first wave of such removals, and Ten-Herng Lai, a Ph.D.. candidate in philosophy at Australian National University, has helpfully compiled a list of writings by philosophers on the topic. 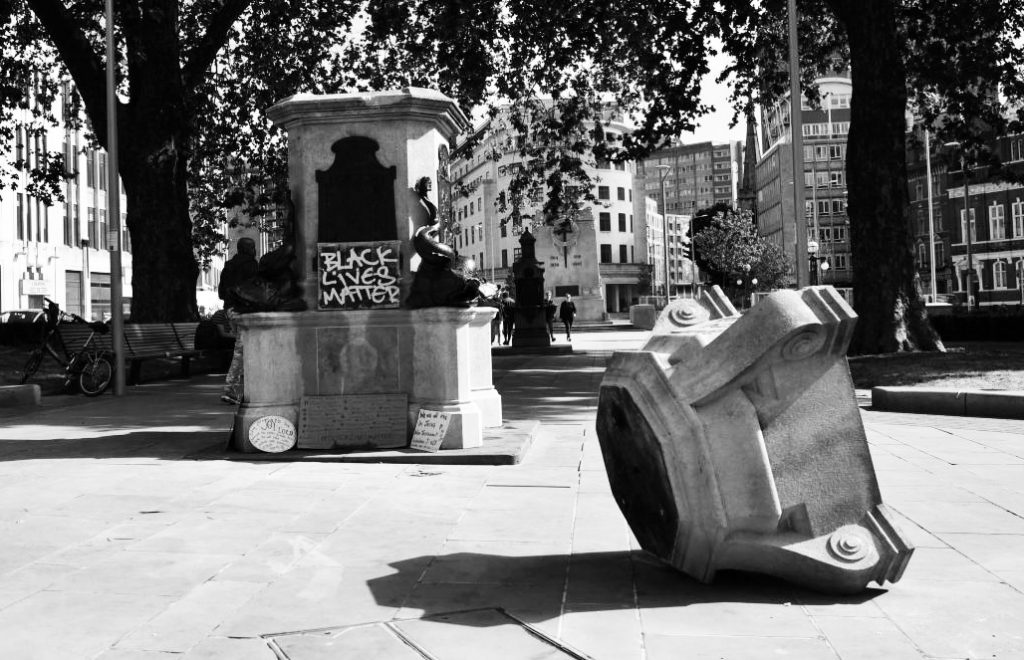 Given the recent events, it seems good to show that the philosophical community has been discussing the ethics of monuments/commemorations/racist heritage for some time. Here is a non-exhaustive lit review of some of the recent developments:

Demetriou, D. (Forthcoming). “Ashes of Our Fathers: Racist Monuments and the Tribal Right“. In Ethics Left and Right: The Moral Issues that Divide Us, edited by B. Fisher.

Demetriou, D., & Wingo, A. (2018). “The Ethics of Racist Monuments“. In Palgrave Handbook of Philosophy and Public Policy, edited by D. Boonin.

Timmerman, T. (Forthcoming). “A Case for Removing Confederate Monuments“. In Ethics Left and Right: The Moral Issues that Divide Us, edited by B. Fisher.

Feel free to add other relevant works in the comments.

“Within the Shadow of Monuments” by Dana Miranda https://blog.apaonline.org/2019/03/26/within-the-shadow-of-monuments/Report

“Michele Moody-Adams on Monuments and Memorials” at the UnMute Podcast.

Take down all statues of people who made antisemitic remarks and the pigeons will die of constipation.Report

Abstract:
This article discuses four loosely related arguments to try to justify the maintenance of Southern Confederate Monuments. These arguments are: The Tradition Argument, The Slippery Slope Argument, The Free Speech Argument, and The Ethics of Instruction Argument. All four arguments are found wanting and in basic denial of the phenomenological reality that these symbols carry in the public sphere. The constituted phenomenological realities of the life world of hate, violence, and terror these objects possess in the lives of Black Americans is evident when we turn to lived-experience.

Thanks for compiling this list Ten-Herng Lai and for posting this Justin! Here are a few more works on the topic.

Abrahams, D. (forthcoming). The Importance of History to the Erasing-History Defence. Journal of Applied Philosophy, 1-16.

Also, this work of public philosophy by Joanna Burch-Brown is great.

Also, not that this really matters, but the publication date for Demetriou’s and my “Ethics left and Right” chapters should be (2020) and not (forthcoming).Report

Susan Neiman’s Learning from the Germans (FS&G 2019) is outstanding; puts the debate about history in the US in context with post WWII Germany.Report

Thanks for putting this list together! I think this would be a great topic to cover in intro ethics in the fall. If anyone has successfully used any of these articles in their intro classes, please mention which ones!

Also some shameless self promotion: I have a paper offering guidelines for when it is morally permissible to endorse or support something with mixed good and bad features. While the focus isn’t narrowly on Confederate or other monuments, the paper offers an explanation of why endorsing Confederate (and other monuments intricately bound up with slavery) is impermissible:

Alida Liberman, “‘ But I Voted for Him for Other Reasons!’: Moral Permissibility and the Doctrine of Double Endorsement” – Oxford Studies in Normative Ethics

Thanks for sharing your paper.

Archer, A., & Matheson, B. (2019). When Artists Fall: Honoring and Admiring theImmoral. Journal of the American Philosophical Association, 1-20.

This is an awesome paper. Though it’s on a different topic, the immediate application is very clear.Report

Here are a few more.

Not strictly academic article but good and just came out: Julian Baggini’s “Not All Slopes Are Slippery: How to decide which statues can remain and which need to go”
https://www.the-tls.co.uk/articles/not-all-slopes-are-slippery/Report

Apologies for the self-plug, but I just had this 1,000 Word Philosophy entry on the topic come out today. Here is the link should anyone be interested.

People in interested in this topic might also find the general issues discussed in the Stanford Encyclopedia entry on The Ethics of Cultural Heritage helpful. I need to do a big update in the next year or so, and plan to add a section specifically on monuments that accounts for all the new work in the OP and comments.

Late to this, but thank you very much for it.Report

Durdiyeva, S. (2020). Memory production, vandalism, violence: Civil society and lessons from a short life of a monument to Stalin. Constellations.Report

The Matthes encyclopedia entry above is excellent and I highly recommend it! For self-promotion, I have two articles about monuments published for non-expert audiences. I advocate for a monument graveyard:

Another piece by myself