Last week, Stewart Cohen, professor of philosophy at the University of Arizona, resigned as editor-in-chief from the prestigious academic philosophy journal, Philosophical Studies, a position he held for 25 years.

Why did he resign?

Philosophical Studies published “Are Women Adult Human Females?” by Alex Byrne (MIT). It then accepted an article replying to Byrne’s article, “Escaping the Natural Attitude about Gender” by Robin Dembroff (Yale). Cohen objected to what he called “unprofessional personal attacks” on Byrne in Dembroff’s paper. He wanted the journal to issue an announcement declaring that it was a mistake to have accepted Dembroff’s paper “without removing the personal attacks.” He also wanted to invite Byrne to reply to Dembroff. The other editors, Wayne Davis (Georgetown) and Jennifer Lackey (Northwestern), along with the publisher, Springer, declined to go along with Cohen’s wishes, so he resigned.

Professor Cohen sent me a statement to this effect on June 5th (but without naming the specific papers and parties). Here it is: 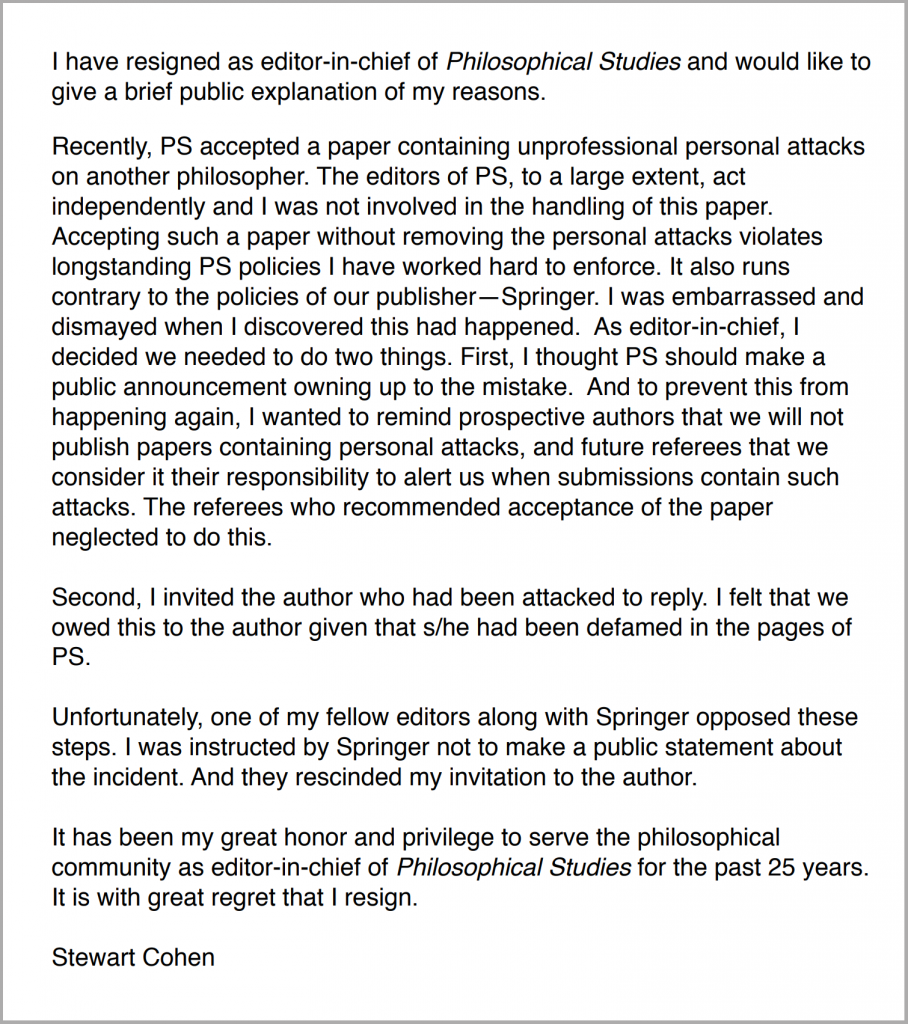 There has been a lot of discussion and speculation on social media about this. One thing to note is that there are multiple parties involved in this story, and that Cohen’s is just one account of it.

Here’s another account, from a message sent yesterday to the Board of Consulting Editors at Philosophical Studies by its current co-editors-in-chief, Davis and Lackey:

We were deeply saddened that Stewart Cohen, long-time Editor-in-Chief of Philosophical Studies, and our long-time friend and colleague, resigned from the journal, and did so unhappily. His public resignation announcement may lead to some concerns about the journal that we wish to address. The critical article he found objectionable was reviewed blindly according to the highest standards of the profession by leading, well-respected and objective experts in the area, and after a round of revisions was recommended for acceptance without reservation. We recognize that what some judge to be warranted philosophical criticism may be regarded by others as personal attacks. But unless they engage in genuine libel or harassment, we respect our author’s freedom of expression. The former Editor-in-Chief suggests that the journal’s publisher, Springer, intervened to prevent the author whose work was criticized from publishing a reply in Philosophical Studies. In fact, the author was welcome to submit a reply, which is currently being reviewed blindly as per our policy. Springer leaves editorial decisions to its editors. We look forward to continuing to serve the philosophical community in the tradition of our distinguished predecessors.

To pull out some relevant details from these accounts:

I will update this story as more details become available.

UPDATE (7:10pm): In light of previous allegations of irregularities with Cohen’s editing at Philosophical Studies (here), I asked him whether Byrne’s initial paper had been anonymously reviewed, and if so, by how many referees. He wrote:

The paper was sent to one referee only. That has been our policy for years, especially since we have been overwhelmed by skyrocketing numbers of submissions in recent years. Springer’s general policy for all their journals requires two referees.  But our publishing editor (who oversees our journal for Springer) has allowed us an exception to this policy given the recent deluge of submissions. Of course, I read the paper myself and concurred with the positive review of the referee.

(An opinion on the alleged “unprofessional personal attacks”.)

Much discussion on social media about Professor Cohen’s resignation focused on what in Dembroff’s paper constituted “unprofessional personal attacks,” with the most popular answer concerning material in the last lines of their paper:

Byrne’s paper fundamentally is an unscholarly attempt to vindicate a political slogan that is currently being used to undermine civic rights and respect for trans persons. And it is here that I return to Byrne’s advice to question the motivations behind this debate. “If someone is personally heavily invested in the truth of p,” Byrne writes, “it is prudent to treat [their] claim that p is true with some initial caution.” I agree. So we may ask: What are the motivations of someone who would so confidently insert themself into this high-stakes discourse while so ill-informed?

In his paper, Byrne complains about what he takes to be a lack of argument for the claim, “TW”, that “Trans women are women, even if they have not had ‘reassignment’ surgery or hormonal treatments,” and suggests that “non-epistemic factors” may be influencing people’s acceptance of it. Insistence by trans women on the truth of TW is not persuasive, Byrne writes, because “if someone is personally heavily invested in the truth of p, it is prudent to treat her claim that p is true with some initial caution.” In short, the motivation of those arguing for TW is relevant to our assessment of the evidence and arguments for TW. Dembroff’s question at the end of their paper appears to be making the same move, suggesting that in light of their examination of Byrne’s arguments, there may be “non-epistemic factors” affecting Byrne’s thoughts on the subject that are relevant to our assessment of the evidence and arguments for his view.

Why did Dembroff’s deployment of this move attract criticism from Cohen and other commentators, while Byrne’s passed relatively unnoticed? For one thing, those who might have felt personally attacked by Byrne’s remarks are trans women, and in philosophy that means that there are fewer people to complain about it, they are discouraged by their social and professional vulnerability from doing so, and their complaints are not taken as seriously.

Another factor, I think, is that there is a bit of a bias we’re all subject to: we treat similar behavior differently based on whether the person engaging in it is part of the dominant “group” or not. Just reverse some elements of this story to see this:

That the crowd has acted so differently in the actual case is something we can learn from.

This is not a call for the crowd to be consistently vicious. Nor, alas, is the solution as simple as for everyone to be equally charitable to all, all the time, since the contexts in which arguments are deployed and the motivations of those who deploy them can have epistemic import. That it is rational to alter our distribution of charity accordingly is something we recognize as soon as we take our philosopher hats off. That said, we aren’t mind readers, and we don’t always know people’s motivations or their significance, and we’re limited and biased in our thinking. So perhaps charity all around is generally called for as a kind of default for when philosophers interact with one another. But a default is just a default, and some deviations from it will make sense. Under what conditions? I don’t pretend to have an answer to that, but it is one question among many we might take from this.