Charles Guignon, professor emeritus of philosophy at the University of South Florida, died this past weekend.

The following is an obituary for Professor Guignon authored by Kevin Aho (Florida Gulf Coast University). 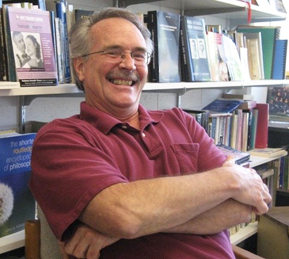 He was most well-known for his work on Martin Heidegger and taught widely in the areas of existentialism, phenomenology, hermeneutics, and moral psychology. In 1983 he published the ground-breaking book Heidegger and the Problem of Knowledge (Hackett) which was the first of its kind to bring Heidegger’s thought into conversation with core areas of Anglophone philosophy. He went on to edit the Cambridge Companion to Heidegger (1993), The Good Life (Hackett, 1999), The Existentialists (Rowman & Littlefield, 2004), and co-edit Existentialism: Basic Writings (Hackett 1995) as well as a volume on the philosophy of Richard Rorty (Cambridge, 2003). He also authored/co-authored extended philosophical introductions to the work of Fyodor Dostoevsky (The Grand Inquisitor, Hackett, 1993; Notes from the Underground, Hackett, 2009). His career-long devotion to moral psychology and the question of authenticity led him to co-author Re-envisioning Psychology (Jossey-Bass, 1999), and culminated in 2004 with the publication of his last book, On Being Authentic (Routledge). (You can learn more about his research here.)

Charlie was always in touch with popular culture and had a gift for making philosophy accessible by drawing on wide ranging references to movies, television, music, and literature. His undergraduate Existentialism and Philosophy of Film classes were always packed. Charlie also supervised/co-supervised a dozen PhD students at USF, and served on the committees of dozens more, shepherding many on to successful academic careers. His graduate seminars filled quickly, and he embodied a rare kind of honesty and vulnerability in these courses that made it clear to his students that philosophy and the questions it engages were deeply personal to him. His seminars were rigorous and demanding, but they were always balanced with his own endearing and self-deprecating sense of humor.

I didn’t know him, but used his books in my Existentialism courses and am very much in his debt for them. May his family and friends be comforted by happy memories of his well-lived life.Report

He was also a good guy. The world darkens yet again.Report

Charlie was my greatest mentor, a keen scholar and thinker, and a genuine and unpretentious person. I will miss him.Report

A great thinker and colleague. USF is poorer for his loss.Report

Charlie, you were always so generous with your knowledge and your time. My experience at USF was richer with you in it. Your reading groups and classes were insightful and fun. I will spend some time re-reading my notes. I made note of some great lines from your lectures! I’m going to miss you! My condolences to Sally, his family and friends.Report

Charles, whose book on Heidegger and knowledge I read with passion, brought New Life into the dry Analytical world of often superficial Philosophy! We Will much miss Charles! God should be in debt with him!!Report

You will be missed. Thanks for your friendship and kindness, and always being so supportive of the work we did. We mourn our loss of a friend and great philosopher.Report

I met Charlie through two of my doctoral students who took courses with him. He served on their Ph.D. committees and though an outsider to the field of communication he fully embraced their efforts to bring lived experience more fully and emotionally into the human sciences through storytelling. Almost immediately, Charlie and I clicked. We became friends and then more than friends forming a kind of academic/spiritual bond around the question of living a good life. We taught a graduate seminar together on narrative than was one of the best experiences of my entire teaching life. Then we began more regularly to meet for lunch. Our lunches sometimes went deep into the afternoon especially after we retired. We shared highlights and low-lights of our long academic careers and became something akin to long desired brothers. I learned a lot of philosophy during those lunches and he opened his heart and his soul to what I called “the kiss of life”, open and vulnerable conversation between friends. These therapeutic and evocative conversations cannot be replaced only remembered. My heart aches at the awareness of the gap Charlie leaves in my life. I am so grateful to Sally for encouraging these encounters. That encouragement was not lost on Sally. Charlie always said Sally was the best thing that ever happened to him.Report

Yes to all this. Charlie and I did not have many opportunities for extended conversation but the ones we had were memorable. He was a wonderful person, whose good humor, irony and vulnerability helps to explain his popularity as a teacher. May we meet again, Charlie!Report

Charlie was an inspiring teacher & scholar & a generous & compassionate spirit. He was a role model to me when my academic career was just beginning. I remember him fondly & will miss him greatly.Report

I first met Charlie when he was 8 and I was 5 as was his sister, who continues as a friend, 68+ yrs later. But we became Friends, not just his sister’s friend, when he was studying at Berkeley. Over the years we periodically kept in touch and compared notes on our life journeys. I only met Sally a few times but she was a wonderful match for him, and gave him the grounding force he needed to focus on his life’s work. It seems odd to think he is gone but reading of his achievements makes me remember how dedicated he was to living life fully.Report

As with many of you expressing your condolences, I too am deeply saddened By Charlie’s death, but I am also profoundly grateful that I was able to study with Charlie. I can honestly say he changed my life. I was an undergrad philosophy major at the University of Vermont struggling with our departments decidedly analytical bent, when Charlie was hired and like a fresh breeze on a stuffy day, he breathed life into our program. Charlie introduced me to the complex world of continental thought and for that I am ever in his debt. His courses on Heidegger, the existentialists, Foucault and others filled a void and sparked and interest that I am still engaged in pursuing. He was generous with his time, wisdom and experience and became a model for me as to what a truly, engaged philosophy professor should aspire to in the classroom and outside of it.Report

Yes, Pat. I too am grateful for Charlie’s Philosophy classes at the University of Vermont: Wittgenstein, Philosophy in Film and my advisor for my honors thesis on Kierkegaard & Heidegger regarding Anxiety.

I was sorry for him to leave Vermont.
I will miss him and remember him.

As my academic advisor, he told me: “I like to tell students that you can do two things with a Philosophy degree: business or cartooning.”

I’m Charlie Guignon’s son. I wanted to say thank you all for your kind words and thoughtful memories. It has provided great solace to me and my sister to see how many were touched by his work and his mentorship. Teaching philosophy was truly his calling in life, and his students, colleagues, and advisees were extremely important to him.

He passed knowing that he was loved and admired by many. This wonderful Daily Nous obituary was provided by his close friend and colleague, Dr. Kevin Aho. Our family’s obituary can be found here: https://www.dignitymemorial.com/obituaries/clearwater-fl/charles-guignon-9194828

We’ve set up a memorial scholarship in his name to assist students at USF who are underrepresented in the field of philosophy. If you are so inclined, please consider donating to the fund with the link at the end of the obituary, or via a gofundme page set up by my sister, Michele: https://gf.me/u/x98iz9

We hope to keep his legacy alive by helping others discover and explore the field of philosophy.Report

I have just read the family obit and it touched me deeply to read it. Thank you for sharing it. He was my teacher and my friend and I learned SO MUCH from him. I wanted to say that I am very happy to know there will be a memorial fund in his name! You can bet that I will make a donation to honor him and his lifetime of work and mentorship.

Charle is currently “in my head” while I read and prepare for a Heidegger reading group every Friday.

Since I left Tampa 3 years ago, he and I wrote to each other and he was always so thoughtful– thinking about life and death and expressing his worries about the current political situation. Even in his distress with it, he’d do what a philosopher does: take a step back from things and thoughtfully consider.

I’ll be writing to Sally in the next couple of days. She was always so sweet! And she fed us on many occasions! 🙂

I wish your family well!Report