The following guest post* is by “S”, a philosopher who recently lost his tenure-track position because of his university’s budget cuts. 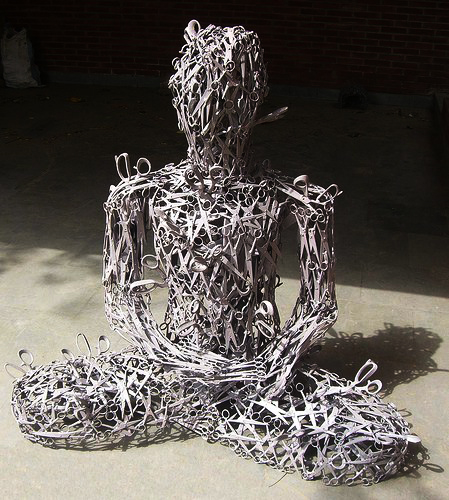 Coronavirus grief is already a vast, monstrous grief, its reach and breadth expanding daily. […] I hope, in this extraordinarily difficult time, to be better than I’ve been at letting myself mourn. I’ll start at the beginning: This is hard. I hurt. If you’re hurting, too, you’re not alone.  – R.O. Kwon

Around a year ago I woke up to an early morning phone call from my department chair. The budget cutting process that had been going on for months—the one with the constantly shifting criteria, endless forms, and tense meetings—was going to mean that my tenure-track position in philosophy was being eliminated. I would get one more year in the supposedly stable job I had clawed through several job market cycles to get.

It was a surprise. Many of my colleagues and I had been sure the powers that be wouldn’t jettison productive junior faculty teaching high volumes of students for low pay, but we had been wrong.

My chair told me I didn’t have to come to campus that day. I said I would be there anyway. I went on a run and started to think about how much I dreaded telling my family, friends, and dissertation committee about what had happened. It was springtime and the trees were sprinkling flower petals down. I drove the 80-odd miles to campus for the all-colleague meeting and told the president of the college what I thought of his decision.

In the coming weeks protests were held and letters were written—both on my behalf and on behalf of other colleagues that had lost their jobs. Students held a funeral for the liberal arts to mourn cuts to programs they valued. They said kind, touching things that made me feel like my work had mattered.

Not many people get to attend a funeral for their own career. I went on the philosophy job market again this academic year, had some interviews, got close to getting some interesting jobs, but ultimately struck out. I’ll be doing something else besides teaching philosophy this August.

Academia is filled with rituals: the first day of class, homecoming, exams, graduation. All of this confers a kind of structure and meaning on our academic schedules. Much of that ritual has become impossible in the wake of this pandemic. Even as many of us are doing our best to use online platforms to preserve the significance of what we do, those everyday structures of meaning disappear into what feels like—literally—a flattened out version of our work.

Insofar as rituals for professors being pushed out of their positions exist, it is probably some form of protest. Those rituals helped me get through the end of last academic year and to gain some sense of closure about what had happened.

Teaching for another year after that was surreal—even before the entire world fell apart. I commuted to a campus that didn’t feel like it was mine anymore, to do a job that soon wouldn’t be mine, either. My current position started to feel more like the non-tenure-track work with which so many of us are familiar: existing both inside and outside of the rituals that create a sense of inclusion and continuity in academic life. The impermanence of these positions renders the future fundamentally uncertain. Planning becomes impossible, no matter how much time is spent planning. Still, I was glad to at least have another year of being a professor.

In some ways, shifting to remote teaching was a relief, because I was able to avoid fully facing up to how big of a change this will be for me and how much I will miss this work. The disappearance of the everyday rituals of in-person teaching meant I could look away from the loss, at least for now.

The elimination of my job had nothing to do with COVID-19. But because of social distancing, I’m not going to get to say a proper goodbye to many of my colleagues and students. My grief about teaching is mixed in with my grief about the horror that’s unfolding due to this virus, as well as my anxiety about the status of academic philosophy, generally.

It is now almost a cliché that working in the academy has taken on the precarity that many other jobs always involved. Recessions, demographic cliffs, and pandemics don’t spare professors, despite the cushions higher education seems to offer.

Even before I defended my dissertation, I was mentally preparing to get that phone call about my position being eliminated. I obsessively imagined different ways of crashing out of academia: not getting a job, losing a job, not getting tenure. Even as I more or less successfully advanced in my career, I deliberated about potential back up plans, not out of a lack of commitment, but because it seemed like the only prudent thing to do. I had already watched people much more talented than I am leave the profession or get stuck on the treadmill of adjuncting. More and more people working toward tenure or who have already gotten it—the people who have somehow won the academia lottery against all odds—will get shoved out in the coming years.

None of this is good for philosophy or for the people who make a living writing and teaching it. There is so much that is wonderful about this work and about being a part of this intellectual community. But I do not think we have a real inkling of what it will take to protect ourselves as workers in the years to come. I worry that the aftereffects of the pandemic, in conjunction with demographic declines and other threats to colleges, will mean that more philosophers will find themselves in my position. Some number of departments may be fine, but a significant number may not be. I don’t know what to do about that, and I am worried that no one else really does, either.

Since I began in this field, it has felt like the academic social contract—such as it is—has continued to fray. The pandemic may tear apart that contract even further if we don’t mobilize to preserve the labor conditions that make teaching philosophy not only possible, but joyful.

Academics are not alone in their profession having been under threat before, during, and after this pandemic. People—many of whom are far more economically vulnerable than professors—lose their jobs every single day, even when covid-19 isn’t wiping out millions of positions on a weekly basis. How we organize ourselves can affect how often that happens, who that happens to, and how devastating such losses end up being.

While the threat to jobs in academia is frankly nowhere near the most important thing the world faces at the moment, it is not a completely isolated phenomenon. The disastrous response to coronavirus is part of a general attitude and failure of leadership that has been endemic in American institutions for a long time. Laborers are treated as disposable and managers and administrators—competent or not—often hold unchecked power to make questionable decisions impacting workers and the people institutions are meant to serve. Some of these decision-makers have the capacity to cause more damage than others, though.

Alongside grief, I am angry about this damage, much of which seems like it is needlessly worsened by leaders that are callous, out of their depth, or both. As frustrated as I am by what happened to me, the sacrifices and risks forced on many others right now dwarf anything I have experienced. It is obligatory to resist the longstanding readiness to unjustly expose marginalized, vulnerable people to the worst kinds of losses. It is also important to confront the growing numbers of workers in the academy experiencing precarity, even if we live in a time where those working in places like grocery stores, warehouses, and hospitals face far greater dangers.

This precarity, which pervades and reinforces our economic system, makes organizing resistance difficult. Those with a sense of security can feel like they gain nothing from sticking their neck out for those who are most vulnerable. Those who are most vulnerable fear speaking up because they are often least able to risk losing their job. In my own experience, watching people overcome these obstacles to oppose those in power—building relationships, caring for one another, taking risks—offered rare moments of hope.

From where I sit, however, I have a hard time envisioning broadly successful opposition to the looming threats academic philosophy faces. I certainly wasn’t able to figure it out in my own case. Until there is far-reaching organizing between different departments, tenure-track and contingent faculty, staff, and students, it is hard to picture an effective challenge to what may be coming, particularly in this crisis. I hope that someone with more imagination (and optimism) than I have is able to chart a path forward.

I fully believe that we can and should give each other practical advice about how to cope with and think about what we as a profession face. But grieving what we are losing and what we have lost is also important.

People need to do whatever it takes to stay sane and healthy as we continue to muddle through this pandemic. There are an overwhelming number of things to think about and to confront right now. At the same time, a significant part of this job is keeping the writing and teaching of philosophy alive in colleges and universities. There is no reason to expect that task to get any easier whenever some of us are fortunate enough to make our way back onto campus again.