That thought is offered up by Grigori Guitchounts, a Ph.D. student in neuroscience at Harvard University, in an article surveying some current brain research at Nautilus. 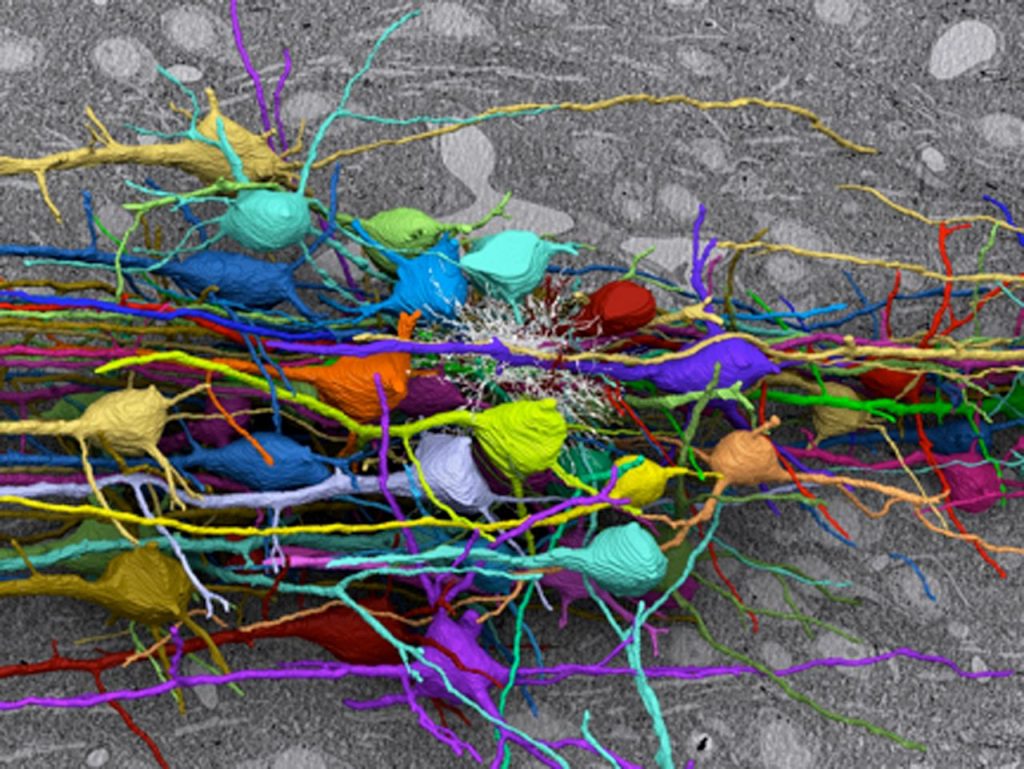 One branch of such research is connectomics, which “strives to chart the entirety of the connections among neurons in a brain.” Guitchounts writes:

In principle, a complete connectome would contain all the information necessary to provide a solid base on which to build a holistic understanding of the brain. We could see what each brain part is, how it supports the whole, and how it ought to interact with the other parts and the environment.

Jeff Lichtman, a professor of molecular and cellular biology at Harvard, works in this area, attempting to provide a map of the brain. Here’s how he does it:

The 68-year-old neuroscientist’s weapon of choice is a 61-beam electron microscope, which Lichtman’s team uses to visualize the tiniest of details in brain tissue… [and] a machine that can only be described as a fancy deli slicer. The machine cuts pieces of brain tissue into 30-nanometer-thick sections, which it then pastes onto a tape conveyor belt. The tape goes on silicon wafers, and into Lichtman’s electron microscope, where billions of electrons blast the brain slices, generating images that reveal nanometer-scale features of neurons, their axons, dendrites, and the synapses through which they exchange information.

The end result will be a lot of data. Guitchounts notes that a “complete wiring diagram” for the much smaller mouse brain would take up about two exabytes. A gigabyte is a million bytes. A terabyte is a million gigabytes. An exabyte is one billion gigabytes. Guitchounts own data for his Ph.D. research came to around 48 terabytes, which if printed out, he estimates, would fill 166 billion double-spaced pages. So you can imagine just how much information a complete connectome of the human brain would involve.

How do we wrap our heads around that? He takes up the question with Lichtman:

When I asked if a completed connectome would give us a full understanding of the brain, he didn’t pause in his answer. I got the feeling he had thought a great deal about this question on his own.

“I think the word ‘understanding’ has to undergo an evolution,” Lichtman said, as we sat around his desk. “Most of us know what we mean when we say ‘I understand something.’ It makes sense to us. We can hold the idea in our heads. We can explain it with language. But if I asked, ‘Do you understand New York City?’ you would probably respond, ‘What do you mean?’ There’s all this complexity.

If you can’t understand New York City, it’s not because you can’t get access to the data. It’s just there’s so much going on at the same time. That’s what a human brain is. It’s millions of things happening simultaneously among different types of cells, neuromodulators, genetic components, things from the outside. There’s no point when you can suddenly say, ‘I now understand the brain,’ just as you wouldn’t say, ‘I now get New York City.’ ”

We might be able to “describe” the brain, Lichtman offers, but understanding is something else. Descriptions offer us lots of information, but “In this age, the wealth of information is an enemy to the simple idea of understanding.” This is in part owed to how we usually come to understand information: through language. Lichtman says, “Language itself is a fundamentally linear process, where one idea leads to the next. But if the thing you’re trying to describe has a million things happening simultaneously, language is not the right tool.”

You can read the whole fascinating article here. Discussion welcome.

Language is not a linear process. It has hierarchical structure. It may still be correct that the complexity of the brain can’t be captured in linguistic understanding. But this isn’t a good argument for that conclusion.Report

I was hoping someone would say thisReport

Also, it is worth distinguishing between (1) the brain, (2) the function of the brain, (3) and the mind. The first is complex but contains no functional relations, only spatial relations. The second contains temporal relations, both sequential and simultaneous. The last one is relational in principle and is likely ordered in a manner akin to language (i.e. logos).Report